Kevin Holland kept his win streak intact this past weekend at UFC Halloween, as he defeated Charlie Ontiveros via TKO (injury) at 2:39 of round one. This makes it four-straight for the Texas native, and he’s in serious need of a step up in competition. 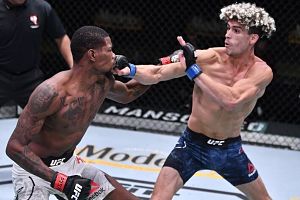 Holland made his UFC debut with a record of 13-3, and after he lost his debut to Thiago Santos via unanimous decision, he won his next three-straight over John Phillips (rear naked choke), Gerald Meerschaert (split decision), and Alesia di Chirico (unanimous decision).

He lost his next fight to Brendan Allen (rear naked choke), a surprise to most, before going on another win streak.

Nonetheless, Holland is now 20-5 as a professional, and he’s been one of the most active fighters on the roster since he’s been with the promotion.

This begs the question, what’s next for Kevin Holland? Is it worth salvaging any of those cancelled bouts? Honestly, all three of them are great match ups. Rodriguez, or D-Rod, is an incredibly heavy handed striker that primarily throws punches. 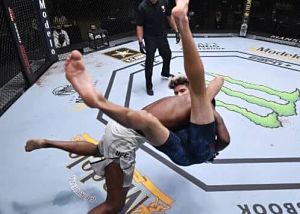 Though he’s 6′ with a 74” reach, Rodriguez has some of the most impactful loopy punches in the game.

He has good technique with it too, his punches come from weird angles and just rattle his opponents when he lands them, which is pretty often. He’s 13-1 as a professional with eleven finishes and a perfect 3-0 inside the octagon thus far.

Trevin Giles made his UFC debut with a 9-0 record, coming off a split decision victory over Ryan Spann.

He picked up two-straight KO victories once coming over, one in the second round, and one in the third round. As you see, his power carries late into the fight.

However, Giles lost his next two fights, both via submission (guillotine choke) in round three. He won his last fight via split decision over James Krause, an incredibly controversial decision, but it brought his professional record to 12-2 nonetheless.

Then there’s Makhmud Muradov, a straight up assassin no one knows. He’s 24-6 as a professional, but just 2-0 inside the octagon thus far. Of his 24 wins, 19 are finishes with 16 knockouts. He’s incredibly technical on the feet, and he has some serious power. 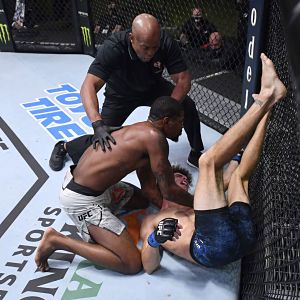 There’s just one problem with rebooking any of these three match ups, none of them are ranked, and it’s safe to say we can all agree Holland deserves a ranked opponent. A ranked opponent he could get matched up with, who might that be?

The winner of Marvin Vettori versus Ronaldo ‘Jacare’ Souza would be a great match up to see him in.

Aside from Kelvin Gastelum, Vettori gave UFC Middleweight Champion Israel Adesanya his toughest fight. ‘Jacare’ is no longer ranked due to inactivity, as well as his last fight taking place at 205 lbs.

Vettori is ranked at No. 13, and if ‘Jacare’ defeats him, he should take that spot, or maybe even move up a little further, considering how much of a staple he’s been in the division.

He’s still one of the best in the world, we just haven’t seen him since November of last year.

The No. 9 ranked Uriah Hall would be an awesome fight to see him in as well. Hall, for the second time in his UFC career, is on a three-fight win streak, after defeating Anderson Silva in the main event. He’s in the perfect spot to face someone like Holland.

Yes, Hall did just TKO Silva, but he didn’t look great throughout the fight. He really didn’t do much of anything until he dropped Silva at the end of round three, and following it up in round four. That’d be a good fight to see where each of them are at in the division. 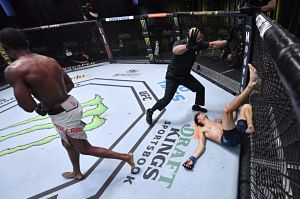 Kelvin Gastelum would also make for a great fight. We all know Gastelum’s one of the very best in the world at both 170 lbs and 185 lbs, but he’s on a three-fight skid, losing to Israel Adesanya (unanimous decision), Darren Till (split decision), and most recently, Jack Hermansson (heel hook).

No one expected that kind of a downfall for Gastelum, he’s a very, very special talent, and he just turned 29-years-old last month.

Not many people can make it to the top of the middleweight division when they’re only 5’9” with a 71.5” reach, but he managed to do it impressively. He’s a great fighter, and he’d be a great test for Holland.

Gastelum’s wrestling and overall MMA grappling is very underrated, it used to be what he won most of his fights with. It’s gotten to the point over the last few years where he’s become a dangerous striker. His power along with his timing and accuracy, it’s absolutely remarkable. His slip, pull back, to a cross has got to be the best in the sport.

Mix that with everything Holland does, who’s a very well rounded talent himself, and it makes for an epic fight we’d all love to see. Whatever ends up being next for Kevin Holland, we know it’s going to be an entertaining fight, that’s for certain.

By Brady Briggs 52 mins ago