Iranian-American lightweight contender Beneil Dariush has really been coming into his own lately, and it’s been very exciting to watch. He just extended his win streak to six-straight on Saturday with his victory over Carlos Diego Ferriera.

This was a very entertaining, back-and-forth battle between two Brazilian Jiu-Jitsu world champions, and for those 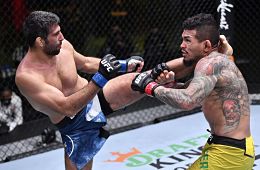 of you who don’t know, this was a rematch as well. Dariush defeated Ferreira via unanimous decision the first time around back in 2014, winning all three rounds against him.

This time, it was much closer, as Dariush defeated Ferreira via split decision in a very close fight, going 2-0 in his series against Ferreira. The grappling these two possess is nearly unmatched, but their striking is also very good and technically sound.

Dariush is more of a kickboxer, boasting a black belt in Muay Thai, while Ferreira is more of a boxer that has a couple nice kicks to go along with it. 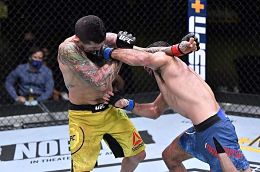 That made Dariush’s victory over him all that more impressive. After starting out his UFC career going 8-2 within the promotion, he went 0-2-1 in his next three fights, being viciously KO’d in both of those defeats by the debuting Alexander Hernandez, and by multiple-time Muay Thai champion Edson Barboza.

This brought his record from 14-2 to 14-4-1, things weren’t looking the best for him, and right around the time where we thought he should’ve been hitting his peak in his late 20’s.

After securing yet another victory in this ever-so-stacked 155 lb division, what’s next for Beneil Dariush?

No. 9 ranked Paul Felder would make for an exciting fight. We’ve got Dariush’s Muay Thai black belt against Felder’s Shotokan karate & 2nd-degree Taekwondo black belts. That’d be very interesting to see who comes out on top.

No. 12 ranked Kevin Lee would also be a very exciting match up to see Dariush in.

Lee is coming off his submission defeat to No. 3 ranked Charles Oliveira, but before that was coming off a KO (head kick) victory over the formerly undefeated Gregor Gillespie.

It’d be interesting to see the striking between these two, and it’d be even more interesting seeing these two grappling with one another.

With Lee’s NCAA Division II freestyle wrestling background, and Dariush’s 1st-degree black belt in BJJ, there’d be no losing for fans in this fight.

Lastly, is a match up with No. 7 ranked, former lightweight king, Rafael dos Anjos, who just returned to the division in November with a dominant five-round victory over Paul Felder.

Dos Anjos is also a very decorated grappler, boasting a 3rd-degree black belt in BJJ; his wrestling is at a high level, and his striking is also incredibly dangerous.

Whoever ends up being next for this lightweight stud, one thing’s for certain, we’ll all be tuning in!

By Andy Stevenson 7 hours ago