Khaos Williams has really taken us all by storm in this year of 2020, fighting just twice, but having devastating back-to-back performances. 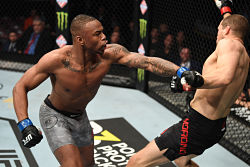 Williams needed just three more seconds this time around, as he KO’d Alhassan in just 30 seconds, improving his professional record to 11-1. 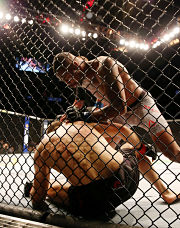 Alhassan was 10-2 as a professional coming into this fight, his only two defeats came via decision, one split decision in a weight class above and a unanimous decision in his last fight, and all ten of his victories came via first-round knockout.

Williams became the first man to finish Alhassan, and he did so quite handily. He now has six knockout victories to his credit, which is honestly very surprising. You really would think most, if not all of his victories would be knockouts after watching his last two fights.

He just touches his opponents, and they’re out. It’s crazy how easy it is for him to turn their lights off in a split second. Not to mention him standing 6’1’’ with a 77’’ reach, he’s an incredibly dangerous talent. No wonder he’s so good at finding his opponents chins.

After going 2-0 in the UFC in 57 total seconds with two vicious KO victories, what’s next for Khaos Williams? The man to defeat Alhassan prior to Williams is Mounir Lazzez, the kickboxing coach at Team Nogueira Dubai.

Lazzez is 10-1 as a professional with eight victories coming via knockout, he’s a very fun to watch, elite level striker. Lazzez is someone that could potentially compete with Williams’ frame, standing 6’1’’ with a 76’’ reach.

The winner of Miguel Baeza versus Takashi Sato would also make for a very exciting match up. Baeza is equally as dangerous and also equally as powerful as Williams. He improved his professional record to 9-0 with seven knockouts this past May with his second-round TKO victory over Matt Brown. 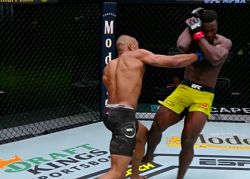 Sato is 16-3 with eleven knockouts and is a fun to watch striker himself. Either of them, but particularly Baeza would be awesome to see. Danny Roberts would also make for a good opponent for Williams.

Roberts came to the UFC at the end of 2015, and though he’s had some serious hiccups here, he’s also had some really stellar performances and showcased all sorts of skills. He’s a former professional boxer, having gone 3-1 before making the switch to mixed martial arts.

His hands are great, he has some really good kicks, and he’s good on the ground. He’s not an elite black belt or anything like that, but he did submit a great ground fighter in Nathan Coy in his UFC debut.

Roberts is coming off a KO victory over Zelim Imadaev, now’s the perfect time to match these two up together. Roberts is 17-5 as a professional with eight knockouts and five submissions to his credit. 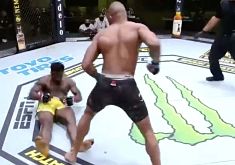 Lastly, we’ll go with the last man to defeat Danny Roberts, Michel Pereira. This is another talent that could match Williams’ size, Pereira’s an absolutely massive welterweight, and he’s dangerous on the feet.

Pereira throws all sorts of unusual wacky types of strikes, he jumps off the side of the cage when striking sometimes, he does backflips in the middle of the fight, he’s kind of a nutcase.

He did however show us he can calm that down a bit and showcase good basic skills in his last fight with Zelim Imadaev, who he submitted (rear naked choke) at the end of round three. Pereira has wicked power and he’s as athletic as they come, he’d be a very fun fight to see Williams in.