“This is an incredible matchup between two of the world’s top 135 pound fighters that we have been looking to put together for the last several months and, now that it is finally here, we will see who the superior fighter is on February 13,” said WSOF President, six-time world champion and two-time Hall of Famer Ray Sefo.

The 26-year-old Moraes, quickly becoming recognized as the top bantamweight fighter in the world, will enter the WSOF cage with eight consecutive victories under his belt, including a split decision over former world champion Miguel Torres, and devastating KO finishes of fellow stars Tyson Nam and Carson Beebe.

In his last effort, Moraes turned in another dominant performance – a second round (1:35) submission (rear-naked choke) of Cody Bollinger in a 140-pound catchweight contest at WSOF 13 on September 13, 2014.  Moraes’ win streak dates back to December 2, 2011, when he earned a unanimous decision over Chris Manuel.

The versatile Moraes will attempt to become the first to solve the puzzle that is the 28-year-old Hill, unbeaten since he made his professional debut with a second round (1:42) TKO (punches) of Vito Attanasi on October 10, 2009.
After a 22-month hiatus, Hill, known for his superior wrestling base, made a thunderous return to action on June 7, 2014 at WSOF Canada 2, scoring a first-round (4:20) KO (punch) on Mike Adams.

The 28-year-old Gruetzemacher is riding a spectacular 11-fight win streak that began with his split decision win over Josh Gaskins on April 11, 2009.  A power striker with considerable ground skills, Gruetzemacher has, to date, claimed 6 of his 12 career wins by (T)KO and 3 by way of submission.

On March 29, 2014, Gruetzemacher made his WSOF debut, earning a unanimous decision over renowned submission expert John Gunderson.  The bout represented the first time in over four years that Gruetzemacher was taken the distance of a fight.

Carvalho will make his much-anticipated debut in the WSOF cage after an extended layoff from competition that began after the 35-year-old suffered a first round (3:06) TKO (punches) at the hands of Darren Elkins, as a result of what many believe was a controversial stoppage by the referee, on March 16, 2013.  To date, 10 of Carvalho’s 15 career wins have come by way of (T)KO or submission.

Prior to the defeat, Carvalho reeled off back-to-back victories in the UFC over Daniel Pineda and Rodrigo Damm on July 21, 2012 and November 17, 2012, respectively.

Over the course of the last nine years, the 26-year-old Campbell has distinguished himself as a force in both the MMA world and the kickboxing ring while competing all over the world.

In 2013, Campbell did damage amongst the ranks of kickboxers in three of the world’s top promotions, including K-1, winning five consecutive bouts.  In both of his MMA starts in 2014, Campbell dominated with his superior striking, scoring a second round (:43) TKO (punches) on Jerrid Burke on May 9 and a second round (:29) TKO (punches) on Marcus Edwards on October 3.

With a proven ability to finish opponents both on his feet and on the ground, the 24-year-old Dewsbery arguably represents Campbell’s toughest challenge in the cage, yet.  The 6-year veteran of professional MMA has, thus far, earned 6 of his 13-career wins by way of (T)KO and another 6 wins by way of submission.
Dewsbery will enter the WSOF cage for the second time in his career, in the midst of a three fight win streak that he began on February 21, 2014 with a first round (4:31) submission (rear-naked choke) of Mark Drummond.  Dewsbery continued making a statement through the remainder of the year, scoring a fifth round (4:34) KO (flying knee strike) on Chase Maxwell on May 23, and a stunning, 38-second TKO (punches) on Tyler O’Brien on October 18.

Dawodu made his professional debut at the inaugural WSOF event in Canada on Feb. 21, 2014, scoring a thunderous first round (1:07) KO (punch) on Behrang Yousefi.  The protégé of Muay Thai guru Mike Miles has since extended his unbeaten streak with two more dramatic victories, finishing Jake MacDonald by second round (:18) KO (punches) at the second WSOF Canada event on June 7, stopping Mike Malott by way of first round (4:13) TKO (punches and elbow strikes) at WSOF 14 on Oct. 11.

The hard-punching Johnson finished 2014 on a strong note, KO’ing Keven Morin with a punch in the first round (3:59) of their June 7 matchup.  The 31-year-old is an eight-year veteran of the professional fight game, who ran to five consecutive victories in his first five starts before suffering his first defeat three years later, in 2010.

A preliminary fight card for WSOF 18: Moraes vs. Hill will be announced soon. 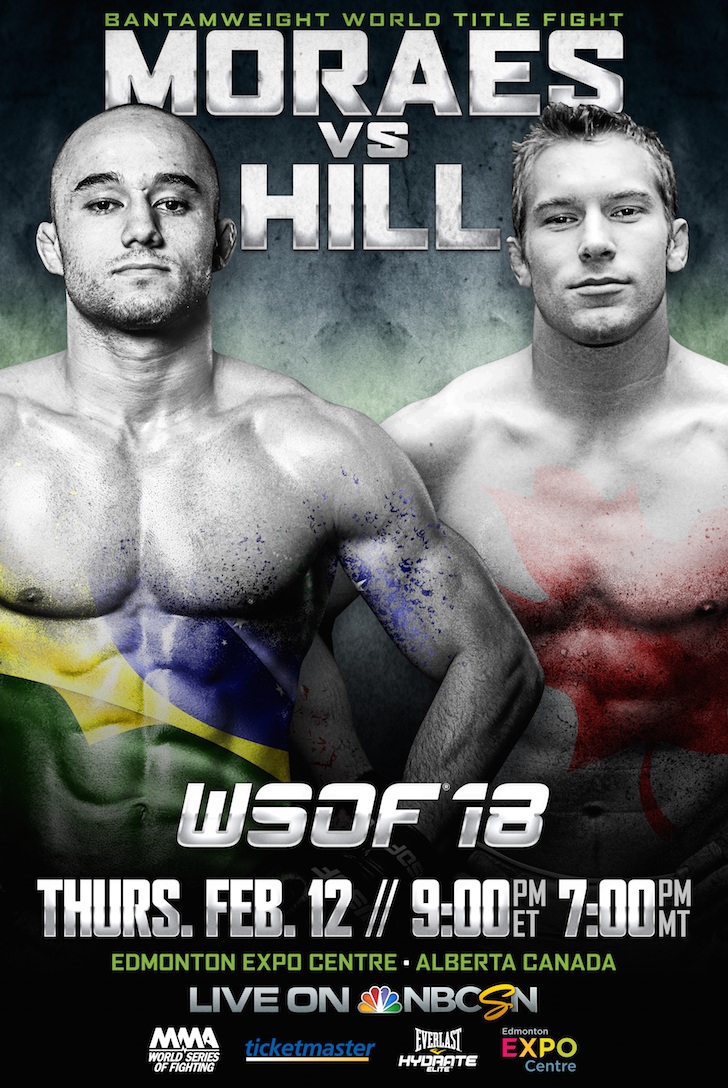 By Chinyere Okafor 10 hours ago