All three of these champions brought their A-game over the weekend. Gillespie delivered his sixth beat down of an opponent in the first round retaining his lightweight title. Jenkins showed patience and maturity inside the cage after battling through a series of submission attacks by his foe, before eventually talking over the bout behind his takedown in the second and third round. Caldwell introduced an MMA veteran, Joe Warren, to an early nap with his rear naked choke submission.

Caldwell was the main event at Bellator MMA 151. He battled former Michigan wrestler and Bellator MMA veteran Joe Warren. The N.C. State 2009 national champion defeated the 2008 national champion and Dan Hodge Trophy winner out of Iowa, Brent Metcalf, 11-6 to win his title. Caldwell also earned the most outstanding wrestler honors of the national tournament. Warren (13-5 MMA, 11-4 BMMA) took third in the NCAA national championships in 2000 and was a 2006 Greco Roman FILA World Champion. Caldwell demonstrated his incredible athletic ability and skills while dominating Warren Friday night. During the bout he suplexed Warren (Throwing him belly-to-back over his head) before eventually taking his neck with a rear naked choke, and putting the veteran to sleep. Caldwell won the main event in Thackerville, Oklahoma, improve his unblemished record to 9-0. Caldwell’s submission came in round one at 3:23.

Jenkins fought Friday night as well on the Bellator MMA 151 card against Goiti Yamauchi. Jenkins weathered Yamauchi on his back attempting to multiple rear naked chokes for nearly the entire first round. In the second and third round, Jenkins used his speed and double leg takedown to hold his opponent on their back while he applied ground-and-pound. In the third round, it appeared close, but the national wrestling champion fought off a tight arm bar and continued to apply top pressure with elbows to Yamauchi. Jenkins was an all-American at Penn State University after placing second in 2008 at 149-pounds before transferring to Arizona State University. While at ASU in 2011, Jenkins became an all-American for the second time when he claimed the national title over Penn State true freshmen David Taylor. Down 1-0 in the second period of the finals, Jenkins snagged an inside craddle on Taylor earning a fall to take home the gold.

On Saturday evening in Atlantic City, New Jersey, Gregor Gillespie sent another opponent packing after he successfully defended his lightweight title at Ring of Combat 54. Gillespie defeated Jose Mariscal via TKO in round one. Referee Gasper Oliver ended the fight due to strikes from back mount. This is Gillespie’s sixth victory in his professional career and all six bouts were finished in the first round. Three fights were ended via TKO and three ended early via submissions. The five-foot nine-inch ROC champion out of Bellmore Kickboxing MMA shows zero mercy for those who enter the cage with him. Gillespie is a native of Webster, New York, and an all-American wrestler out of Edinboro University. the four-time all-American earned his honors from 2006 through 2009. In 2007, the Scotsman captured the 2007 149-pound national championship after defeating University of Michigan’s Josh Churella with a 3-1 overtime win. Gillespie hopes to capture the attention of UFC president Dana White when he tagged him on Facebook with a photo of his first round finishes. 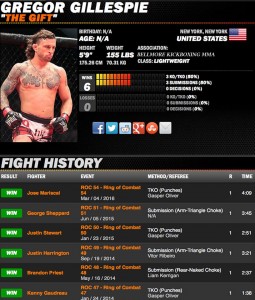 Between the three NCAA national champions, their MMA records combine for an impressive 26-2. Expect to see these three fighters wearing a UFC, and/or Bellator MMA belts in the near future.

Below is a video of the highlights from Friday night’s Bellator MMA 151 card in Thackerville, Oklahoma.