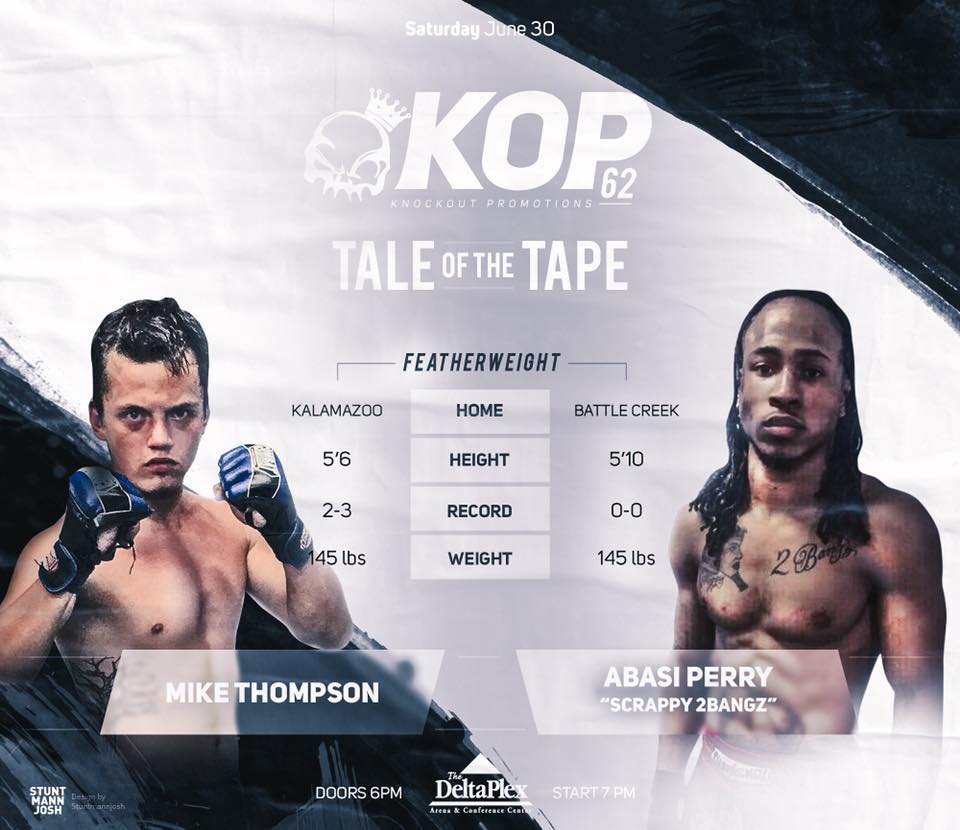 Abasi Perry makes his MMA debut at KOP 62 on June 30.  “Scrappy 2Bangz” discusses his start in MMA, having a twin brother that also competes in the sport and his upcoming fight.

How did you get involved in MMA?

“Fighting has been in my heart for as long as I can remember. From fighting my twin brother to dreaming of being a WWE star to having to fight everyday in the streets. I got into wrestling in the middle of high school then after high school I still knew there was so many areas to grow in my arsenal. And boxing in the basement with my dad and my brothers set me up to have Tiger instincts.”

How did you get the nickname “Scrappy 2Bangz”?

“When I was in the Streets I went by ‘Scrappy Doo’. As I got older, I wanted to mature that. The ‘2Bangz’ started when my brother Jake started calling me that because I always had 2 bangs in my face that wouldn’t fit in my pony tail. So I took the two names and merged them together.”

You have a twin brother, Idris, who is also a fighter and an amateur, do you want to turn pro with him when he becomes a pro?

“I’ll go pro when I feel ready, I can’t base my career off my brother’s career just because we’re twins. I know we’ll train and grow together but we’re two different individuals. If I was chasing my brother, I would’ve jumped in the cage when he did.”

How excited are you for this fight?

“I’m super anxious to get in there and make my mark. I took my time with this and I feel bad for any man willing to step in front of me.”

Your opponent has more experience than you, how do you overcome his experience?

“My opponent may have a few fights under his record but I been doing this my whole life off record and I promise he ain’t never let a gorilla like me get a hold of him.”

How do you think you matchup with your opponent?

“I know to he’s going to want to dance around and he’s hoping to get to the ground. I hope he tries that route. No matter where we go in this fight I’ll be making him uncomfortable.”

How does this fight end?

“This fight ends with me getting a win in my debut, no doubt in my mind.”

What are your goals in this sport?

“My goal is to work my way up and expose everyone who is in it for the show, in it for the money, anyone who doesn’t have their heart in it but getting glory. My goal is to go down as one of the greats of course. I lived over two decades for this and its time.”

The last word is yours, please feel free to say what is on your mind, a message to your fans or opponent

“No words for my opponent, my fighting will do the rest of the talking.”

By Adam Martin 41 mins ago