Adriano Moraes (20-3) is set to defend his ONE Championship flyweight title against arguably one of the greatest mixed martial artists and flyweights in the history of the sport.

The thing is…. Moraes has already defeated Demetrious “Mighty Mouse” Johnson (23-4-1) at their first outing in April 2021.  Many critics and fans believed the victory over DJ was a “fluke” or an “upset,” but Moraes and his team were confident in their abilities and knew the win would come their way.

Now, with just one title defense separating that fight, a third-round submission over Yuya Wakamatsu in March, Moraes feels the time is right for the rematch, and that the outcome will be just the same.

“As champion, I have to defend my title,” Moraes said. “Regardless of who my opponent is, I have to be ready on the scheduled date to do my job in the best possible way. I’ve fought Demetrious Johnson. I’ve shown my strength against him. But if this is the fight ONE Championship wants, if that’s the plan, I’m in. Let’s make it happen.”

The loss to Moraes is Johnson’s only blemish since arriving at ONE in 2019.  The former UFC champion and future Hall of Famer has been highly regarded as the “GOAT” or “greatest of all time.”  With such an honor attached to Johnson’s name, it is no wonder why Moraes wants to prove the first fight wasn’t a fluke.

“This fight is very important for my legacy because I want to make as many title defenses as I can during my career. And [another] victory over him will help a lot in building that legacy.”

The pending flyweight world championship title fight between Adriano Moraes and Demetrious Johnson is currently the only “officially” announced matchup for the event which will be held in Singapore on August 26. 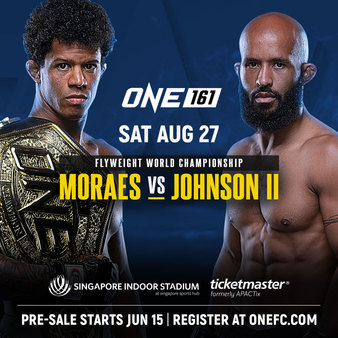