At Fury FC 40, Will Morris returned to the cage for the first time in over a year since he lost to Joe Schilling at Bellator 210. “Blue Chip” Morris responded in a big way, defeating tough veteran Le’Ville Simpson via rear naked choke in round one to become the Fury FC middleweight champion. I caught up with Morris and discussed with the bout with him and what his goals are for 2020:

Congrats on your win, what was it like for you to be able to step up on short notice and pull off the victory?

“There wasn’t a feeling of short notice for this fight. I trained my body the past year… my mind for the past year to do exactly what played out. I was more relieved than anything that I was finally in a cage with an opponent. That circumstance was one that seemed impossible for a while so the fact that I had an opponent sign a contract and share a cage with me was all I was thinking about and hoping for. Short notice or not I was relieved.”

Before this fight, you last fought in 2018, though there was a cancelled fight for September, did you feel like you never left or was there a readjustment phase when you the fight started?

“There was no sense of readjustment. The feelings that make a fight different than a sparring session are feelings and emotions you have to accept and understand before the fight even starts. I expect the energy that comes with the atmosphere of a fight. And I’ve learned how to render them meaningless in the actual fight itself. I’m to the point now where I cannot only hear my coaches voice, but he also doesn’t have to talk loud anymore. I’m that “dialed in” every time I’m put in a high pressure situation whether it’s on an NFL football field, a golf course, a boxing ring, a track, or a cage. I’ve lived under the lights my whole life. So when I finally got the opportunity to step foot back under those lights for the first time in a year, it wasn’t something to get used to. It was something that made me finally be able to breathe. Relax. And enjoy.” 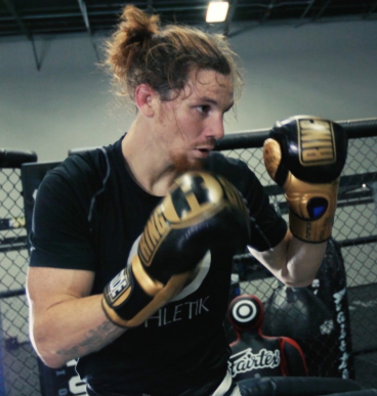 How important was it for you to bounce back from the last fight which you lost with a big win and were there mental hurdles you had to overcome to do so?

“As far as the importance of bouncing back from a loss in any sport or aspect of life is a big deal. And the way people describe that importance is different. Some will bear the load and stress over what may happen. I’ve always been able to breathe and relax in those situations. I’ve put so much value in the learning aspect of movement in general. My movements nowadays are geared towards what I call the ultimate martial artist. I’ve spent my last 8 years entirely on becoming the ultimate martial artist. And I’m to the point where I have a PHD in this game and am able to almost teach myself as well as learn from others. From anyone. Since I’ve developed the education and have become an actual student of what I do, I don’t ever worry about what will happen. I know the sport too well to question what I will do. And with that level of education comes an extreme sense of true confidence. There was no hurdles inside the cage. I’ve been in the dark the past year training. And waiting.”

Did you feel the fight played out how you thought it would?

“It did. I never go into a fight trying to picture any certain situation. I make sure I don’t control the opponent in my head when I shadowbox. There’s never a situation that goes through my head twice. It’s always a new situation. That way I’ll never be thrown off guard in any fight no matter what the situation is. Because at some point in time I’ve pictured it happening before.”

When you head back to the gym, what’s the area you most want to improve upon?

“I’ve got some technical tweaks I want to make in my game. Some things that will make my overall arsenal bigger. Doing that involves failing at it in the gym until I figure out why.”

What are your expectations of yourself in 2020?

“World Champion. Anything less is meaningless.”

By Mike Pendleton 23 mins ago

By Adam Martin 59 mins ago