Several notable UFC and Bellator MMA athletes departed the U.S. today for the Middle East where they will take part in a two-week “Fighters for Freedom” tour as part of Armed Forces Entertainment’s “Home for the Holidays” campaign.

Former UFC strawweight champion Carla Esparza will be joined by fellow UFC fighter Alexander Hernandez, Vinc Pichel, and Louis Smolka.  Also, on the tour, Marine Corps Veteran Shane Kruchten, who has most recently competed for Bellator MMA, will also be part of the five-fighter crew.

While the exact locations where the fighters will visit cannot be disclosed due to operational security procedures, the athletes will interact with U.S. and foreign military services, demonstrating their talents as professional mixed martial artists.  They will even get to spend the Thanksgiving holiday with the brave men and women who wear the uniform on a daily basis.

Amanda Earley is a U.S. Army Veteran turned public relations specialist who has worked with a laundry list of MMA competitors. Earley has a passion for what she does and this trip will mark the sixth year she has taken fighters to visit troops deployed around the globe, throughout a total of 10 trips.

“As a 10-year Army Veteran, who only got out because of having to have two spinal surgeries and learning how to walk again, I missed being in the military,” Earley said.

“This gives me the best avenue to incorporate my Army life and my public relations life. It allows my two-year old son to recognize sacrifice and to see somebody away, even if it is just two weeks at a time. It allows the men and women of the United States military to understand how important they truly are despite what any media might say,” she continued.

Each branch of the U.S. Armed Forces has adopted a form of military style combatives which servicemembers must train and be proficient in.  Having professional athletes available to work with them will help give the men and women of the military a different take on how some of the techniques can be applied.

“I’m doing the tour for the troops because I know as a prior service member how important it is to know that you’re not forgotten when your deployed,” said Kruchten. “These brave men and women are serving our amazing country overseas and the opportunity to go over as a professional Mixed Martial Artist and do a tour and have the opportunity to roll with them is something you can’t put into words. I’m honored and grateful for the opportunity.”

MyMMANews.com will be the official MMA media source of the tour, regularly checking in with the fighters as they tour the globe.  Check back daily for updates during this two-week journey. 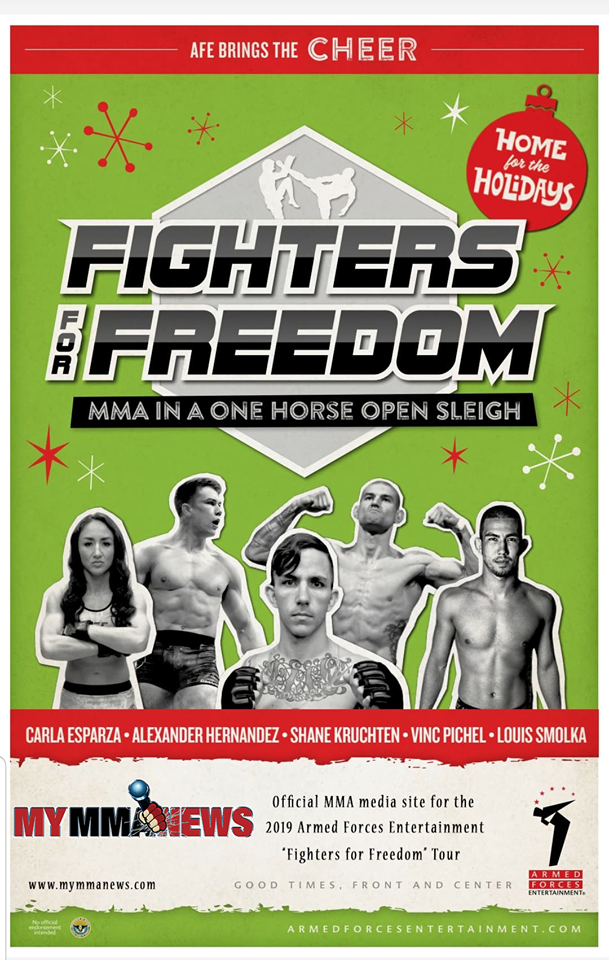