UFC today announced that Art Davie, UFC creator and co-founder, has been named to the UFC Hall of Fame class for 2018 as a Contributor. The 2018 UFC Hall of Fame Induction Ceremony will take place on Thursday, July 5, at The Pearl at Palms Casino Resort in Las Vegas. The event will be streamed live and exclusively on UFC FIGHT PASS.

“Art’s contributions to UFC helped lay the foundation for the sport that fans around the world see today,” UFC President Dana White said. “It’s an honor to induct Art into the UFC Hall of Fame class of 2018 and we look forward to celebrating his career at our ceremony in July.” 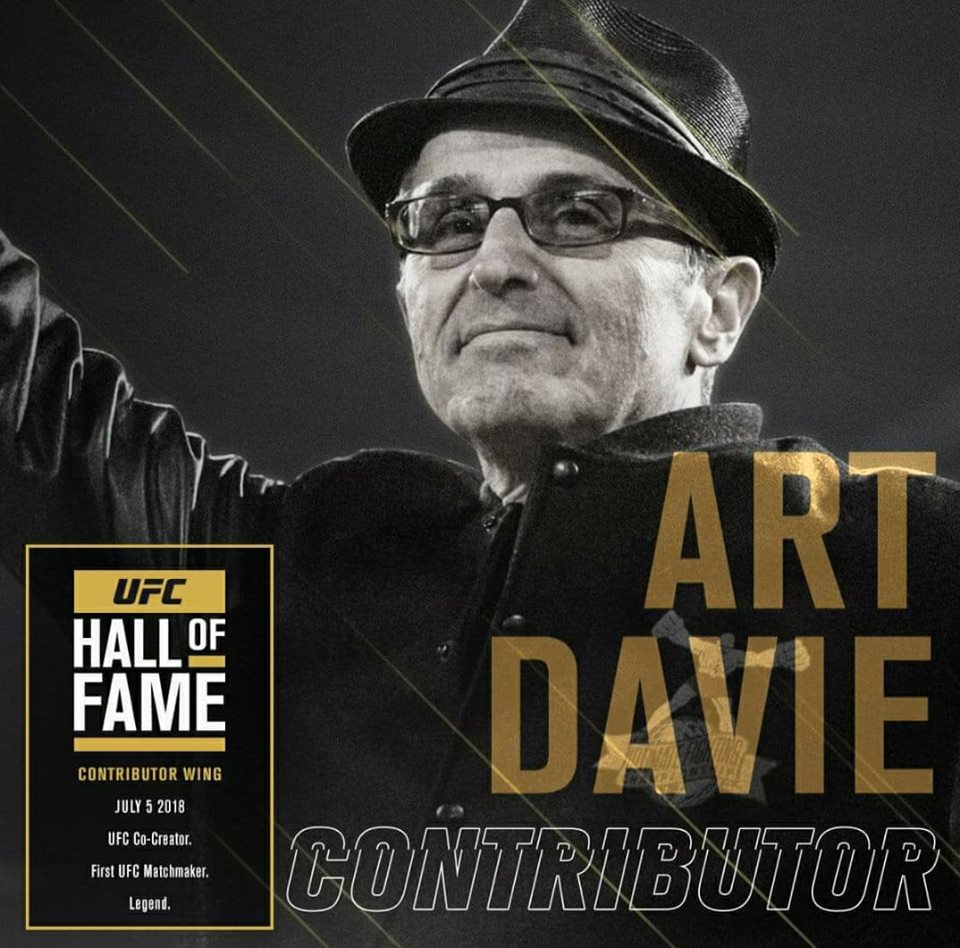 “Being inducted into the UFC Hall of Fame is the greatest honor that can be bestowed to anyone involved with the sport of mixed martial arts,” Davie said. “Watching UFC become mainstream and break all these records over the years has been like watching my child go out and conquer the world. I’m so proud of what UFC has become and I’m thrilled my part in its creation is being celebrated during its 25th anniversary.”

Davie, a native of Brooklyn, New York and a former advertising and marketing executive, began formulating an idea to produce a unique martial arts event in 1989in response to an advertising brief. Davie’s client passed on his concept of producing a tournament entitled “World’s Best Fighter”, but Davie was certain his idea would be a success with proper planning.

Over the next four years, Davie worked tirelessly to turn his concept into reality. During his research, Davie came across a Playboy Magazine article featuring legendary Brazilian jiu-jitsu master Rorian Gracie, whose Gracie Academy gym was located two blocks from Davie’s office in Torrance, California.

After joining the academy to train and serve as Gracie’s marketing consultant, Davie convinced Rorian to partner with him on a project he named “War of the Worlds” a tournament which would attempt to solve the age-old question of which fighting style is superior. Semaphore Entertainment Group (SEG), a New York-based PPV producer, agreeing to televise the event.

“War of the Worlds” was rebranded to the Ultimate Fighting Championship and the now iconic Octagon was chosen as the center for competition, with the first eight-man tournament taking place at McNichols Sports Arena in Denver, Colorado, on November 12, 1993.

Davie began recruiting fighters from various martial arts disciplines such as boxing, karate, kickboxing and sumo, while Gracie enlisted his brother Royce to represent his family’s submission style. Gracie, undersized in comparison to his competitors, upended conventional thinking by utilizing Brazilian jiu-jitsu and taking down and submitting all three opponents in less than five minutes combined.

The event, branded UFC® 1: THE BEGINNING, was a huge success by industry standards, tripling SEG’s projections with more than 88,000 buys and forever changing the combat sports landscape.

Davie and Gracie sold their stakes in UFC to SEG in May of 1995. Davie would stay onboard as a member of UFC’s executive team as an advisor and the organization’s first-ever matchmaker until UFC JAPAN: ULTIMATE JAPAN in December of 1997.

After leaving UFC in January of 1998, Davie continued working in the entertainment industry as a television producer until he was named Head of United States Operations for K-1 Kickboxing.

During his tenure with UFC, Davie was responsible for many firsts and innovations, such as instituting the Ultimate Fighting Alliance to govern the rules and regulations of the new sport, developing the original rulebook and format of UFC, hiring on-air talent, and recruiting eight of the 14 fighters who are currently inducted into the UFC Hall of Fame Pioneers Wing. This impressive roster of future UFC Hall of Famers includes Ken Shamrock (inducted 2003), Dan Severn (inducted 2005), Randy Couture (inducted 2006), Mark Coleman (inducted 2008), Tito Ortiz (inducted 2012), Don Frye (inducted 2016), Maurice Smith (inducted 2017) and Kazushi Sakuraba (inducted 2017).

The remaining inductees of the UFC Hall of Fame class of 2018 will be announced in the coming weeks leading to the 7th Annual UFC International Fight Week™, which takes place from Tuesday, July 3 through Sunday, July 8 in Las Vegas.