Earlier this week fight fans saw one of the best preliminary fights at UFC 225 get twisted up in controversy. First, the razor thin, ultra competitive women’s strawweight bout between Carla Esparza and Claudia Gadelha got people chattering when many believe the decision in favor of Gadelha should have gone the other way.

Then Esparza went on the MMA Hour Monday to discuss her split decision loss to Gadelha and accused the Brazilian of cheating, claiming her opponent had greased herself before the fight. Esparza then later admitted she was hesitant to inform the referee ahead of time, and she didn’t inform her corner of the situation til long after the fight was over.

“She cheated in the fight; she greased before the fight,” Esparza said. “I was considering saying something to the referee in between [rounds]. I was going to say, ‘She’s greasing! She’s greasing,’ but I didn’t really know how to go about it. … Even when I was trying to grab armbars during the fight my arms kept slipping down. She’s a cheater, but it doesn’t really surprise me. In my opinion, she’s been a pretty dirty fighter throughout, so it is what it is.”

Ever since this story broke on Monday, Gadelha has gotten word of the issue and has finally responded to the bizarre allegations put against her from Esparza yesterday while talking with MMA Fighting .

”I think Carla is trying to find excuses for what happened,” Gadelha said.

“I badly injured my knee, everyone at the UFC (Performance) Institute knows that because I was treated by the institute’s physiotherapist. (The physiotherapist) was the only reason I didn’t pull out of the fight. She said ‘I’ll take care of you.’ I kept visiting the physiotherapist during fight week to be able to fight. I felt the knee in the first round, could barely stand, and still beat Carla in her game, wrestling, so I think she’s just mad she couldn’t outwrestle me. She was supposed to be a high-level wrestler and that’s how she lost to me.

“There’s an athletic commission with officials following you the moment you enter the arena up until the point you enter the Octagon, including inside the Octagon, checking if there’s something on your body. Come on, we’re in 2018, this greasing story is from Vale Tudo days, don’t know how many years ago. At this level, today, I don’t think it happens anymore.

Standing firm on her claim for her opponents transgressions, she turned to her twitter account, posting a graphic of the actual scores of the fight to further justify her to being the rightful winner, even suggested a potential rematch with Gadelha. 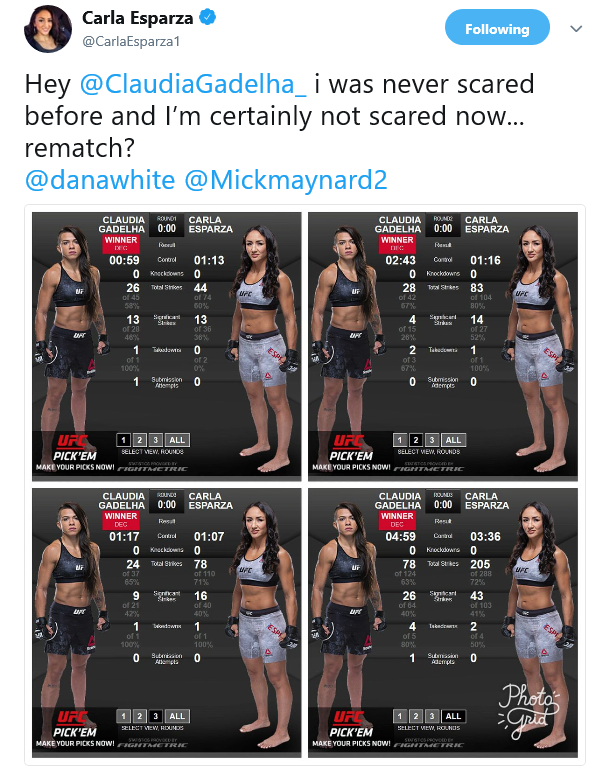 She also cemented that her assurance of what Gadelha did is 100% true in a follow up tweet, stating she’d never just put blame on someone for something just for the sake of doing it.

“And just for the record, I would NEVER publicly accuse someone of anything unless I was 100% sure.”

”If Carla wants a rematch, I don’t see any problem with that,” Gadelha said. “I’m sure I’ll dominate her even more because I dominated most of the fight with only one leg.

”I think Carla is mad at me because this fight was supposed to happen for years, so she brought her best version,” she continued. “Her best version and me with one leg, I still won, so let her talk whatever she wants. If a rematch has to happen, I’m here.”

”I don’t think my performance guarantees me a title shot, and I don’t want that,” Gadelha said. “I don’t think I performed well. I’m not happy with my performance. I gave all I could in there, but I really fight with only one leg. My knee is bad, I injured my thigh and my LCL and still fought, but I’m sure that if I were 100 percent the fight would had been different.”

Do you think we’ll see a rematch between Carla Esparza and Claudia Gadelha?