This will be the first time that the Finishers Sub only has held an all-female event, with a full line up of women’s superfights and its first 16-woman 115-pound tournament to crown a Finishers strawweight champion. The winner of the strawweight tournament will take home a $2,500 cash prize. You can watch the live stream on the Show the Art youtube page and as always, the live stream is completely free for the fans. Check out the full lineup of the event below.

Opening up the event is an exciting match up between Sophie Sharp of Pellegrino MMA and Lilly Ramos of 10th Planet Newton. Although they both have yet to hit their teenage years, they have been absolutely killing it in the local competition scene and are actively racking up sponsorships due to their talent. SicChic Clothing, who sponsors the Finishers 9, is also a sponsor of both of these girls and although the two are friends, they are both excited for this opportunity to show their skills on a larger stage. Sophie is also sponsored by another Finishers 9 sponsor, Eat Clean Bro, as well as Inverted Gear, Thrive Spine & Sports Rehab, and New Jersey Nutrition. The bottom line is, don’t let their age fool you, as both these girls are very accomplished and hungry to prove themselves.

Some of the standouts of the 115-pound tournament include EBI veteran and likely one of the favorites to win, Danielle Kelly, who trains out of Silver Fox BJJ. Danielle got her start in grappling with wrestling at a young age and between wrestling and jiu jitsu has been training for over 10 years now. She is the current RISE Submission Invitational 125 pound champion after winning a four woman bracket at RISE Submission Invitational 3. She also performed extremely well at EBI, submitted Lila Smadja-Cruz in overtime in the first round of the tournament and falling to Rikako Yuasa in overtime in the quarter finals.

Danielle is also a teammate to another one of the competitors to watch this weekend, Cristina Pinto. Cristina is a purple belt training out of Silver Fox BJJ and is currently going to school full time to pursue a career in medicine as a neurologist on top of her training schedule. She is experienced with both upper and lower body attacks and is used to training with a lot of other high level female competitors at her academy, such as Danielle and EBI champ Erin Blanchfield.

10th Planet also has a handful of competitors in the 115-pound tournament, including Lilly Ramos’ teammate Randi Miley, who is a blue belt at the newly affiliated 10th Planet Newton.  Randi has appeared in the Finishers Sub Only 3 times so far in superfights and has won every single match, making her 3-0 for Finishers events.  Although she is another one of the younger competitors, she has also appeared on bigger stages such as Kasai Pro, so she is no stranger to high level competition.

Alyssa Pellin from 10th Planet Montreal is another one to watch and will be competing in this tournament the day after competing in a 16-woman absolute tournament at SOGI 2, which just goes to show how game of a competitor she is.  She also had a superfight at the last Finishers Sub Only event which she won.  Linda Mihalec, a purple belt training out of 10th Planet Richmond/AFS Academy, is the last 10th Planet representative and is about the make her pro mma debut July 19th in Florida.

Katie Egan, a blue belt training out Gracie Humaita Philly, is another competitor you will want to pay close attention to on Sunday.  Katie competes regularly and under all different rulesets and just recently won all of her matches last weekend at the Gracie Humaita in house tournament.  Although she is only a blue belt, she has been absolutely destroying her competition and out of her last 22 matches she has finished 19 by submission.  She likes to think of herself as a “points conscious submission player” and has the luxury of training with famous female black belt Valerie Worthington.  Katie really credits her coaches for her game and eager to represent her team this weekend.

All of the women on this card have been putting in their time and really it could be anyone’s day on Sunday, so you’ll definitely want to tune into the youtube live stream to watch the action unfold.  You can also pay at the door if you would like to attend live.

Sponsors of the Finishers 9 include Eat Clean Bro, Finishers TV, SicChic Clothing, and Muse Coffee Co.  All graphics done by Ashan Initiative and photos at the event will be taken by Giulliana Fonseca. 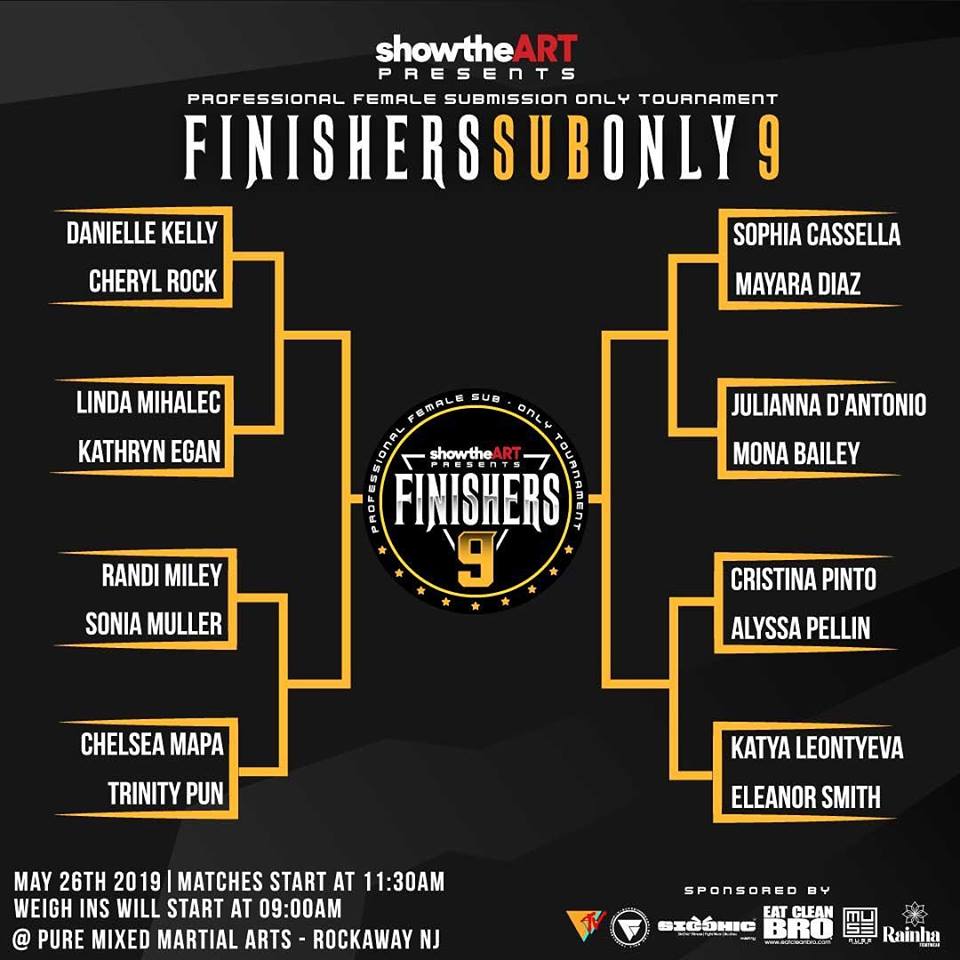 By Mike Heck 18 mins ago

By Mike Heck 1 hour ago