We have an incredibly exciting co-main event to look forward to this weekend at UFC Vegas 22, just before ranked middleweight talents Derek Brunson and Kevin Holland walk out for the main event of the evening.

That co-main event comes in the lightweight division between Gregor Gillespie and Brad Riddell. 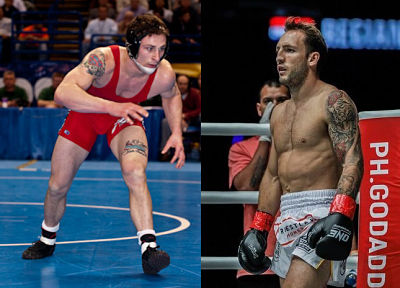 In wrestling, Gillespie is an NCAA Division I national champion, as well as taking 4th, 5th, and 7th place the other three years. He’s a four-time All-American, and he’s also a three-time EWL & PSAC conference champion.

Not only that, but Gillespie’s second-to-last wrestling match in college took place against none other than six-time Bellator lightweight champion, and No. 4 ranked UFC lightweight contender Michael Chandler, following his defeat to Jordan Burroughs.

Gillespie defeated Chandler 10-2, and we all know how great of a wrestler Chandler is. That says something, not to mention, he’s got that Colby Covington pace with it, no 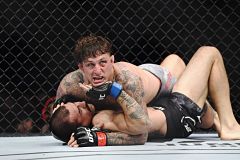 one can ever keep up.

The only man that was able to walk away the victor over Gillespie in a fight was Kevin Lee, who KO’d him with a head kick in November of 2019, and we haven’t seen him compete since.

Before that, he’d won the ROC lightweight championship and defended it twice 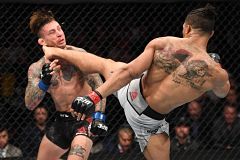 Now he gets a chance to right the wrong he made against Lee, but against a much more dangerous striker.

While Riddell is still only 29 years old, he racked up a professional kickboxing record of 59-8 before transitioning to mixed martial arts, and he’s only lost once in ten MMA fights thus far.

His sixth victory showed him capture the Wollongong Wars welterweight championship, just before making his UFC debut, and he’s gone 3-0 inside the octagon in those three bouts since.

Those victories came over the likes of Jamie Mullarkey (12-2), Magomed

Riddell’s looking to secure that first finish inside the octagon, while Gillespie is looking to get back to his winning ways. This is such a great match up, and a tough one for each man.

For those of you that’ve seen Riddell fight, you’ve seen how he’s built like someone that’s competed in Judo and Greco-Roman wrestling his whole life, but his skill set shows us much different. That power certainly carries though, don’t let his three decisions inside the octagon fool you. 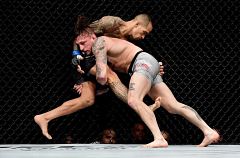 That’s made it incredibly difficult for opponents to take him down, his hips are so strong, and his strikes have a lot of pop on them.

The methods of victory are clear in this one; Riddell needs this fight to stay on the feet, and he’ll walk away the victor, while Gillespie obviously needs this fight on the mat, where he’s one of the best in the world at controlling his opponents.

Who walks away the victor in this epic lightweight bout between Gregor Gillespie and Brad Riddell?

By Brian Jensen 20 hours ago