After his second professional MMA fight in Rosemont, Illinois at Bellator 221, Jake Hager heard a crowd of boos raining down on him, but that was all familiar to the former WWE star. Hager has heard plenty of criticism in his first two professional fights since making the transition to MMA, but as he prepares for the third fight of his career against Anthony Garrett, Hager’s ultimate goal is to pay it all back to those who have supported him.

As he prepared for his fight against Garrett, Hager recently appeared on All Elite Wrestling, signaling that he would be competing in both professional wrestling with AEW and MMA with Bellator. The entertainer in Hager is ready to take on both worlds, but Jake Hager the person, just wants to give it all back to those who have supported him along the way.

Speaking with MyMMANews.com at media day, Hager spoke about balancing both wresting and MMA, his ultimate goals in his fighting career, and why giving back to his team and his family is most important to him. Even with the critics and the boos surrounding him, Hager said he’s surprised by his progression in mixed martial arts.

“For me personally, I’m really surprised and excited about the progression. I was blessed with those two fights that I didn’t have any injury time, I didn’t have to recover, no hospitals or anything like that. So I was able to get right back in the room which is exactly what I need. This first fight I kind of bulled in there a little bit and tried to get him down, in the second fight I try to use a little bit more finesse, so we’ve seen little things I do well and we’re trying to build on that.

The biggest thing for me after the second fight was I sparred all summer, I never stopped sparring, so I feel like I came into camp so much better, so much ahead of the game for this camp than I did the first two, and I think that’s going to show. For me, consistent work is the only way that I’m going to do it.”

Never one to shy away from hatred or let the critics take up his energy, Jake Hager credits his time with pro wrestling for helping develop his thick skin which has helped him ignore the crowds and critics in MMA.

“Yeah you definitely have to have a thick skin in pro wrestling because no one hates pro wrestling more than pro wrestling fans at times, it’s kind of funny when you say that. I definitely grew a thick skin. But I learned from a long time ago that a live audience no matter what sport, MMA, theather, pro wrestling, there’s a live audience and you have to play that into the factor. That moment after the fight [at Bellator 221], it was a very special moment, it was almost as big as the fight itself. I think you’re going to see more and more MMA fighters capitalize on that moment and have stuff ready to give them a character, to make them feel a certain way, because that’s what fans are really going to remember. They may remember my arm-triangle but they definitely remember me telling them to shut up.

You know those Chicago fans are just mad that their quarterback’s name is Mitchell and not Donovan or Patrick. Please print that.”

No stranger to entertainment, Jake Hager knows a balance is needed with both pro wrestling and MMA and he credits his family and his team’s support for helping him get through both stages of his career. 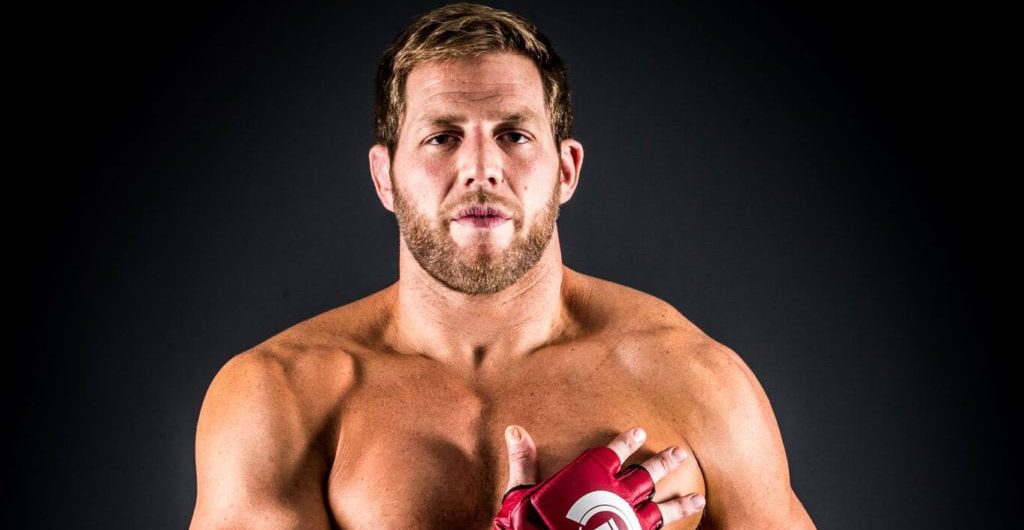 “It’s something that I can’t do by myself, my wife has been so instrumental in both of these, and has made so many sacrifices for me, in order so that I can do this. You really need a strong environment around you that enable you to do this. There’s time you need thick skin, there’s time you need a little pep talk and a little push, and luckily my team understands both MMA and pro wrestling, what a huge opportunity this is, how cool it is, and they all come together and help me with it. I’m not in that cage or I’m not in that pro wrestling ring by myself, it’s all of us out there.

I just don’t want to disappoint them. All the fans can say what they want about me. My biggest worries is all these guys that given me so much of their time, my wife has made so many sacrifices, I can’t let anybody take this away from me, for that alone.”

Having been on some of the biggest stages throughout his sports and entertainment career, Jake Hager does not shy away from why he is in MMA, to be a prize fighter. In being a prize fighter, Hager sets aside title aspirations but still has his sights set on big fight opportunities. It’s not his focus point, but Hager did admit his dream MMA moment would come against one of the greatest heavyweights of all-time.

“I’d love to fight Fedor in Moscow next year that’d be a great moment. But for me, I haven’t hidden the fact that I’m a prize fighter, I’m doing this for the money. So as great as championships and big matches like that [against Fedor] would be, my MMA moment is just providing for my kids and my family, and that means more to me than anything. When we were growing up we were always told once you have kids you have to save to pay for their college well now school is a little bit different and I’m having to save to pay for second grade. I really look at is as being a man and providing for my family and that’s why I’m doing this.”

Saving for the future of his family and giving back to his supportive environment is the most important thing for Jake Hager, but he also acknowledges that by having a career in pro wrestling and MMA simultaneously, he’s’ showing his children a valuable life lesson, that you can excel at more than one profession at a time.

“That’s definitely one thing I want to instill in my kids, I want them to know that anything is possible and even if you go through some dark patches like I did towards the end of my WWE run, the book isn’t finished being written. You can always write the next chapter, but you have to be willing, and I just hope they see how hard I work in order to do this.”

The book is not done being written on Jake Hager’s professional MMA and wrestling career, and when as he prepares to write the next chapter, giving it all back to his family and his team is of the utmost importance. In order to do just that, the natural-born entertainer and prize fighter, will have to drown out the boos and continue to piling the victories.

You can hear the full interview with Jake Hager below:

By Kyle Carroll 1 hour ago