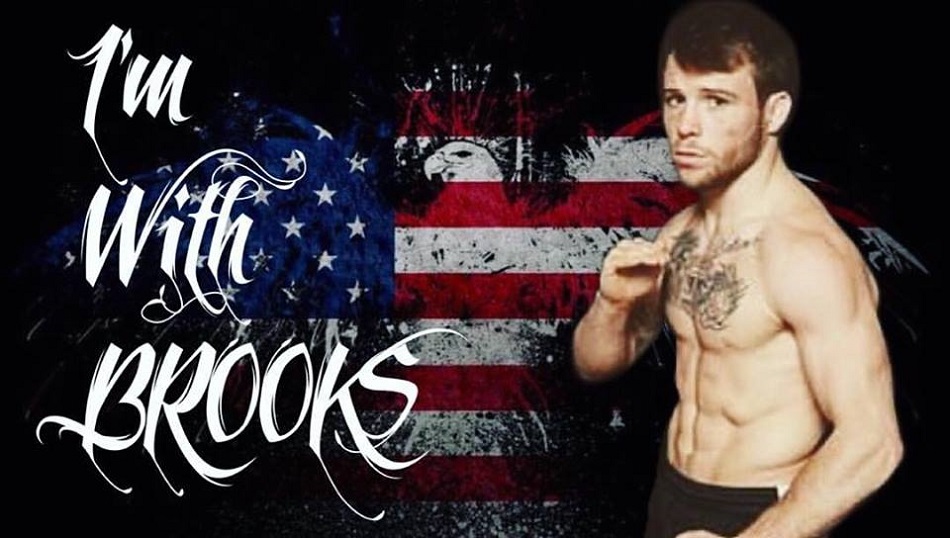 The Manifestation of a Dream: UFC Flyweight newcomer Jarred Brooks ready to “Run The Division” starting at UFC 208

Jarred Brooks has been dreaming of fighting for the UFC since he was five years old.

“I’ve manifested this since I was a young boy. When I was f—ing 5 years old I was sitting acting like Tito Ortiz, bleaching my hair and winning wrestling tournaments and slamming kids on their f—ing domes.”

His dream of becoming a UFC fighter has become a reality. Due to a death in the family, Neil Seery no longer will fight Ian McCall at UFC 208 next Saturday night in Brooklyn. Seery’s replacement is the 23 year old, undefeated Brooks (12-0) who is ready to make a statement. In fact, this is a fight Jarred Brooks has been thinking about for several years.

“I was ecstatic, man (to get the call from the UFC),” Brooks said while appearing on the SFLC Podcast.

While Brooks has always looked up to “Uncle Creepy”, that has changed since the pen went to paper.

“I see Ian as only an opponent, and he’s in my way of my dreams,” Brooks said. “I know he’s a mental head case, so I’mma get in his head as much as possible. I don’t think he’s ready for somebody that’s as fast and as strong as me, and he’s gonna overlook me. So, we’ll see how that goes with him.”

Brooks, at one point, was the top ranked 113 pound wrestler in the nation. He took his first amateur MMA fight at the age of 13. He was 84 pounds taking on a 25 year old man. He lost the fight that night, but went on an impressive run as an amateur. He hasn’t lost a fight since, and was an alternate on this past season of The Ultimate Fighter

“I have no idea why I was an alternate,” Brooks said. “I didn’t have a championship from a major organization. I felt like I was supposed to be on there, watching all the guys get their pictures taken and getting all their s— done. I’m thinking in the back of my head, I’m BETTER than Tim Elliot, I’m better than all of these guys on this show. Even watching it I was like UGH, I wanna f—ing…puke.”

While a lot of fighters would be nervous or excited about making their debut on a big stage in a big city, Jarred Brooks is approaching his UFC debut differently; with calmness, confidence and with a look at a bigger picture.

In a sport that garners so much admiration from it’s fans, it also garners criticism, maybe more than any other sport in the world. Brooks knows the latter will likely be coming his way.

“Of course people are going to look at me and (be) like, ‘Who the fook is this guy’…Conor McGregor style,” Brooks said. “I don’t care about that. All of the people that know me and who train with me and have seen me fight in person…know I’m the real deal, and Uncle Creepy, he’s going to get that mustache shaved off coming February 11th, and it’s in Brooklyn too. I like those fans, those fans remind me a lot of myself.”

Jarred Brooks has made it clear; he feels he will have a strong mental edge heading into this fight. Brooks has been taking shots at McCall on Twitter since the day the fight was announced, even calling him a “Senile old man.” He’s planning on continuing this trend all the way into the octagon on February 11th.

“I’m actually pretty humble when it comes down to fight,” Brooks said. “I know what I’m doing with this fight. He’s a mental mindf—. Anything to get into this dude’s head, I’m gonna do. When I get in front of him, he’s gonna f—ing hate me to death, and I don’t care if this listens to this f—ing s—. He knows I’m gonna get in his head, and that’s the point…When you break down a building, you wanna break it down from the floor up. So, I’m gonna hit him in the head, mentally any physically.”

It is no secret that Ian McCall has had very bad timing and very bad luck throughout 2016, and even into 2017. The UFC moved quick to get Brooks in to replace Neil Seery. McCall had to pull out of his last fight with Seery in Dublin due to an extreme case of food poisoning. Brooks, however, isn’t buying it.

“I don’t give a f— if my left hand is chopped off, I’m fighting,” Brooks said. “I’m fighting in the UFC. I’m gonna go in there and give it my all. You’re telling me that you’re gonna not fight because you had food poisoning? That s— wasn’t legit. He wanted his little base pay so he could go do his little cryogenic center s—. He doesn’t want to be in this sport anymore. He wanted to fight Neil Seery or someone in the top 5 because he knew that those were either fights that he could win and mentally be there, because he’s a mental mindf—! Neil Seery, he’s about to retire, so he’s like, ok, this guy already wants to be out. But, the last thing that he wants to deal with is a UFC newcomer like me. You can overlook me all you want, but when you feel me…Seeing me and feeling me are two different things. When you feel me, you’re gonna f—ing realize who you’re f—ing with. I’m a god in the octagon.”

Brooks feels like he has the advantage on the feet and on the mat in this matchup. If Ian McCall plans on taking the fight to the ground, that is a strategy Brooks welcomes with open arms.

“Motherf—-, I’ve been doing jiu-jitsu since I was like 6 years old,” Brooks said.

The Barclays Center in Brooklyn will host UFC 208 on February 11th. It will also play host to this very intriguing Flyweight matchup between the wily veteran, and the undefeated 23 year old newcomer. Jarred Brooks is ready to make an impact, and if his prediction on the fight rings true, he will certainly make that impact.

“I’mma go out and he’s gonna get knocked the f— out,” Brooks said. “Either he’s gonna go to sleep with me choking him up against the fence, or I’m gonna hit him with a fast left-right. You guys’ll see it.”

The message for UFC fans who will see Jarred Brooks fight for the first time at UFC 208?

“It’s only the beginning. You guys are gonna see me run the division.”

LISTEN TO JARRED BROOKS ON THE SFLC PODCAST:

By Doug Murray 5 hours ago