Jason DeLucia will forever hold a place in mixed martial arts history, having competed in the very first UFC on November 12, 1993. DeLucia would get a submission win over Trent Jenkins that night and return to fight two more times at UFC 2 before competing in approximately 40 fights for Pancrase in Japan. When the UFC brought their UFC 23 fight card overseas DeLucia would get another shot with the company, unfortunately for him however he would lose by way of TKO due to an injury. DeLucia would eventually retire from professional MMA competition in November 2006.

Tony Reid – You answered an ad in Black Belt Magazine that was placed by Steven Seagal that basically invited all challengers to come to his dojo and fight him to the death. Can you walk us through that incredible story?

Jason DeLucia – “That’s right, Steven Seagal invited anyone to come to his dojo and fight him: ‘Be prepared to fight to the death. So I drove out to Hollywood with a well-devised plan to fulfill his promise of a met challenge. I had a written response and my actual presence. I explained to his chief instructor that I was answering his open challenge and even had the issue of Black Belt in my hand to refute any denial. The instructor, Matsuoka Haruo, understood I was acting justly according to honor, but explained that it probably wouldn’t happen. So for about six months straight I attended every single class morning and evening, and waited and watched and studied Aikido while I waited. Haruo patiently and politely endured my presence until the school eventually moved from West Hollywood to Santa Monica. Seagal never intended to back those words up. Ironically, he now is affiliated with the UFC, something he would never dare do, only make a movie about.”

Tony Reid – After that experience with Seagal you happened to catch wind of another challenge in what turned out to be the Gracie Challenge. Talk about how that challenge changed the course of your life. You actually fought Royce Gracie prior to UFC 2… 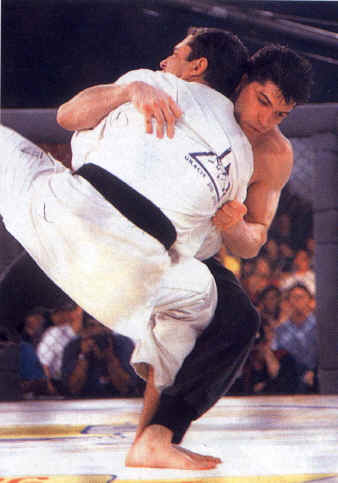 Jason DeLucia – “It was based on that initiative with Steven Seagal that I took another challenge while in Los Angeles, called the Gracie Challenge. These men meant every word they said, it was a no holds barred match in their dojo against Royce Gracie. Old school. Royce’s right hand had duct tape around the knuckles, which he punched me in the face with about a million times. Elbows to my spine, heel kicks to my kidneys. Of course I wanted a rematch. That’s when I was offered to fight in UFC 1.”

Tony Reid – You actually got a shot in the UFC prior to UFC 2 as well, being an alternate at UFC 1 and recording the first rear naked choke submission in the company’s history. How cool is it to hold that distinction?

Jason DeLucia – “Another strange irony was that I have the first rear naked choke and first triangle in UFC history. Ironic because I was not a mat technician like Royce, it was just luck that it happened that way. But the powers that be have been very careful to hide those two fights from the public; all you ever see is Royce beating me in UFC 2. Can’t see me versus Trent Jenkins or Scott Baker.

“Those fights were instrumental, however, in launching me straight to a very rewarding career in Japan. I was able to study Aikido in the motherland and apply what I learned directly in actual situations, unlike people who only make movies about their martial arts but never fought. But at least he gets to play fighter in the UFC. But all joking aside, it was Seagal that led me to Royce, and Royce led me to Japan. And I am grateful for both people, in all honesty.”

Tony Reid – You have competed with some of the most legendary figures in combat sports history from Royce Gracie at UFC 2 to Bas Rutten and Matt Hume in Pancrase just to name a few. What is your most memorable in cage or in ring moment from your entire combat sports career?

Jason DeLucia – “I really understand now that some are competitors and others artists. Competitors must win. Artists must make it exciting. Most fighters are one or the other, but some are a mix of both. I am predominantly an artist. That I have expressed my art in a competitive environment regardless, not caring about the outcome only about the art, is what I remember most. I am proud to have stood up and fought with one of the greatest competitors of my generation, Bas Rutten. Bas is a rare mix of artist and competitor. And experiences like Matt Hume and Royce were such educations as to subtleties. Wrestling in particular, where the emphasis is on base and balance, but to the untrained it looks brute.”

Tony Reid – In the Bas Rutten fight it was reported that you suffered a ruptured liver. Can you talk about that fight and confirm or deny that report?

Jason DeLucia – “Bas definitely hurt me bad, and it was a long time before I was right. It might have helped not drinking whiskey with him after that fight!”

Tony Reid – When taking on Royce Gracie at UFC 2 he secured a fight ending armbar, which many people thought was held too long after the referee’s stoppage of the fight. What are your thoughts on fighting such an icon in Royce on a bigger stage (and a second time around)? Do you have mixed feelings about the footage and images always being shown of that fight?

Jason DeLucia – “The obviously intentional showing and reshowing of Royce’s fight with me “OMG how many times,” and then not perhaps offering a rematch based on the hype alone, especially when it could have been so huge a draw on two occasions — one in Brazil, and the other in Massachusetts when UFC was there — I think it was such a huge missed opportunity for the sake of one man’s ego, Dana White. The ego of control always contains its own undoing.”

Tony Reid-I am currently rewatching every UFC event starting with UFC 1. Being a part of that history, what would you want me or any fan to take away from the early days of the sport?

Jason DeLucia – “In UFC 1 and 2 there were no rules. You could eye gouge and you could bite. You would simply be fined and still win the fight with an eye gouge. Since then we have realized we are not animals, and rules and rounds and weight divisions have been imposed. My hope is that people will lobby for one final change, to get rid of ground and pound. It is ugly and undignified, and an insult to the patriarch spirit. Really, it’s an insult to the intent of the patriarch of this sport, Helio Gracie, which was to show that it is possible and consistent that you could subdue with submissions and have dignity.”

Tony Reid – Do you still follow the sport? What are your thoughts on the growth of MMA over the past few years? Do you have favorite fighters you enjoy watching today?

Jason DeLucia – “I’ve sort of promised myself to abstain from it until ground and pound is removed. I recently attended an event in which Hybrid Fighting was the undercard, and as soon as the Pro started I became ill. I don’t like ground and pound.”

Tony Reid – Do you keep in touch with any of the people you worked with back then (sponsors, trainers, competitors)?

Jason DeLucia – “I miss a lot of folks from the old days. We cross paths as needs be, but most of us are separated by distance.”

Jason DeLucia – “My fondest memory of the UFC was when I was allowed to escort Helio Gracie to await introduction to the venue. It may not seem like much, you had to be there. My least favorite memory was watching Pat Smith essentially murder Scott Morris with hatred. I understand that there were things behind the scenes which prompted the fury, but…”

Tony Reid – Can you share a behind the scenes story from your days in the sport that the average fan would never hear about?

Jason DeLucia – “Once when the business in Japan was becoming rather shady, I was ordered to take a fight for the Seikendo federation with about a week’s notice. I had just won the Pancrase catch wrestling title against Minoru Suzuki, and a week later was going to fight a Russian Thai boxer. I was taken to the arena very early and it was cold in the arena. I was told to go in the parking garage where the van was running with the heat on. I sat in there for some time and began to feel nauseous. I went outside to throw up and saw that there was a rusted tin can placed over the end of the tail pipe of the van I was in. Entertainment insurance was the bottom line. I was lucky; many were not. When you watch these athletes, remember the nature of the business. It’s business.”

Tony Reid – Is there anything we haven’t covered that you would like to discuss?

Jason DeLucia – “Really of importance to me is the idea of changing the mat dynamic. Submission is an art form. Ground and pound is not. It’s for dignity and safety’s sake.”

By Drake Riggs 22 hours ago