Kicking off the start of the new decade, One FC initiates the launch of its 2020 fight series with One FC: “A New Tomorrow,” emanating live for the Impact Arena in Bangkok, Thailand. Making his debut on the star-studded card is 12-1, Joey Pierotti.

Fighting out of Enumclaw, Washington, Pierotti’s work ethic and success have given the full-time firefighter top ranks as one of the elite fighters from the Pacific Northwest. Now Pierotti is competing on a major platform, as he is looking forward to showcasing his talents to a worldwide audience.

Handling dual occupations, the secret to his success, new responsibilities, and pivotal ONE FC debut, Joey Pierotti shares all his thought in this exclusive  MYMMANEWS.

You are a firefighter and a Mixed Martial Arts fighter, which is a fascinating set of occupations. Was being an MMA fighter something you always wanted to do?

Joey Pierotti: “Being a professional athlete has always been something that I’ve wanted to do. Growing up, I originally wanted to play in the NFL, but I didn’t have the size or skill to do that. My first MMA fight was at 19/20 years old. I was home from North Idaho College, where I was earning a scholarship wresting, and wanted a fun way to stay in shape. I also had never been in any fight to that point, so it was like killing two birds with one stone for me. Not even a scuffle really, my wife Sarra and I joke that she has been in more street fights growing up in Boston. After college, like most, I didn’t know what I wanted to do as a career. Luckily my old pee-wee football coach and my mom had recommended that I give firefighting a shot. I signed up to volunteer for Enumclaw Fire (my hometown) and loved it. After about 4-5 years of testing and interviewing, I finally landed a career job at the Port of Seattle Fire Department. My shift and the department have been very supportive of my ‘side job’, and when I was fighting locally, a large posse of them would show up and show their support, very live, and in person.”

Before reaching a major platform fight stage, many MMA competitors find themselves building their reputation in their regional fight circuit. Coming from the Pacific Northwest fight scene, share with us your journey and how important was it to you in making a name for yourself in your regional fight circuit?

Joey Pierotti: “I really enjoyed my time on the local circuit, coming up from the amateur ranks, all the way through my professional stint in the PNW. I was born, raised, and currently reside in Enumclaw, WA. Being able to fight close to home was great for my family and friends, which in turn was great for me in having all the love and support going into every fight. I would be lying if I said it didn’t add a little bit of pressure just because I always want to represent and perform well, even more so when you are fighting in front of so many people that you know. My most nerve-racking fight was actually put on by my coach Jeff Hougland, in my hometown and was an all-ages amateur show. I say all ages because I also coached my brother’s junior football team and junior wrestling team, so all of those little guys were there screaming bloody murder for me. I would have had a hard time getting them to listen to me as a coach had I lost that one. Lucky for me, I was able to get the knock out in the second or third round.”

Winning has been a constant throughout your professional fight career. Looking back at your previous battles, what do you feel separates you from your opponents that, in conclusion, made you the victor?

Joey Pierotti: “What separates me from my opponents is my work ethic. I go into everything with the thought in the back of my mind that someone is trying to outwork me. Whether it was when I was trying to get hired as a full-time firefighter, sports growing up, or my career in MMA. I have never been the most skilled or gifted in anything growing up, but the one thing that I have always been able to control is the amount of effort I can put into something. Priding myself on that alone has been a staple in my training, and I feel like I can honestly say that if someone is working harder than me, I would be very interested in seeing what that looks like.”

Now you find yourself competing on a major fight platform, One FC on January 10. Working so hard to reach this moment, what do you feel got you to this stage of your career?

Joey Pierotti: “I think that the key ingredient in getting me to where I am with ONE FC, on one of the biggest stages in the world, would have to be consistency. When I say consistency, I speak on all aspects of my life from my training to my coach Jeff Hougland, my training partners, and also, the support from my family, friends, and work-family. We have had to make tweaks here and there, but all in all, everything remains the same, which makes it much easier for me to put in as much effort as I’m can. I have been consistently working for almost five years now and am finally getting a chance to show what I can do on this huge platform in ONE FC.” 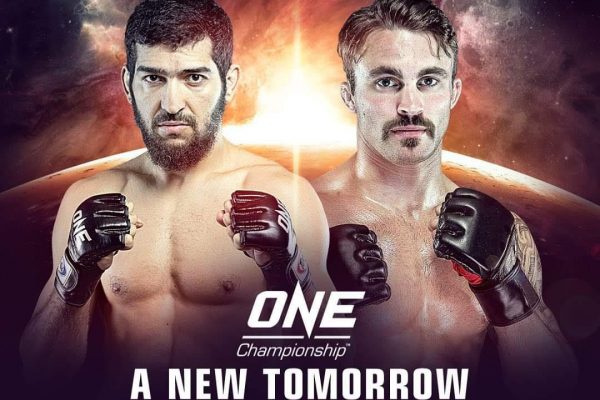 You are training hard for your upcoming fight. Your coach, Jeff Hougland, is a UFC veteran with almost two decades of pro fight experience. With many great fight coaches and schools across the United States, what has made Jeff Hougland, the perfect candidate in guiding the career of Joey Pierotti?

Joey Pierotti: “Jeff Hougland has been the perfect candidate for guiding my career because he genuinely cares about my well-being. He has always believed in me from day one. Now we have done some cross-training with the guys out of Tyler McGuire’s home gym in Spokane, WA (Sik Jitsu), which was brought on thanks to Jeff. Jeff is a lot more than just a coach though, he is a great friend who is always looking out for me, and over the years our families have become close. For a while, I used to live down the street from him, and one day he noticed that I was gone. I was gone for a couple of months in rehab down in California. He mowed my lawn for me and helped maintain the exterior of my house, so it at least looked like it was business as usual. He probably thinks that I forgot about that because it wasn’t that big of a deal and so long ago, but it meant a lot to me, and that’s why I would do just about anything for that guy because I know he would do the same for me.”

Amid the exciting fight news, you also have been given more exciting news and responsibly in the form of a newborn baby girl. From a mental standpoint, has it been difficult focusing on your upcoming ONE FC match, while caring for a newborn?

Joey Pierotti: “Thank you for bringing that up. Yes, my wife Sarra, and I have a new addition to the family. Her name is Zoey Cali Pierotti. Honestly, if Sarra wasn’t so great it taking on more of a load during the training week that it would be much more difficult. But somehow, I feel like I have got more energy and more drive moving toward my upcoming fight, January 10. Maybe it is the dad-strength kicking in or that I want to have some cool stories to tell her when she gets older about how her dad was able to get to one of the biggest stages in the world and win a world title. Though scheduling/ coordinating plays a role in everything, it’s all possible because of the unconditional love and support from Sarra.”

Knowing that you are traveling overseas, leaving your family behind, does it give you extra motivation to come out victorious?

Joey Pierotti: “It 100% does give me a little extra motivation. I grew up on the Rocky franchise, so this is right up my alley. I’m looking forward to being out of my normal comfort zone and excited to see what kind of fighter it brings out in me.”

How does this win help with your future fight endeavors?

Joey Pierotti: “I think that with a win and the type of performance I am able to put together, it will show what my intentions are for the ONE FC Welterweight division. Hopefully, it will put me in the right direction toward a world title.”