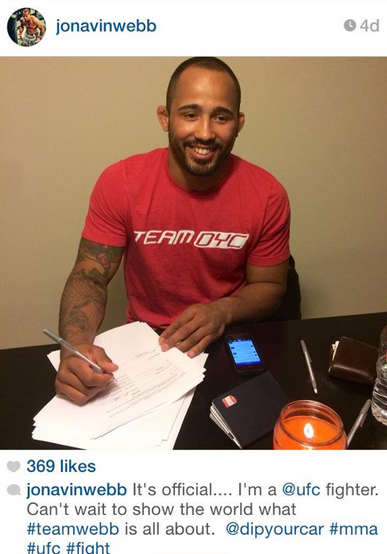 In his first interview since signing with the UFC last week, Jonavin “the Spider” Webb talks with MyMMANews.com’s Adam Crist to discuss the last week and how it all went down.

Webb who is undefeated as both an amateur and pro (8-0, 1NC) relinquished his Cage Fury Fighting Championships middleweight welterweight title to sign with the largest mixed martial arts organization in the world, the UFC.

When did the champion find out he got the call up?  April Fool’s Day, so of course he thought it was a joke.  Webb walks us through that day and discusses what it was like learning from manager Robert Haydak that he would now be fighting on the big stage.

In his debut on May 9, Webb will fight his former training partner, Kyle Noke, an Australian, in Australia.  He tells us how the odds are stacked against him and he never fought a guy he has trained with but he is looking forward to the fight and possibly even drinking some beers with Noke after the fight is over.

Webb was supposed to defend his CFFC title against Lyman Good in a rematch that resulted in a no contest due to an accidental eye poke, however since he received the call up to the UFC, the title holder will now be decided between Good and Nah-Shon Burrell.

Webb currently has a GoFundMe crowdfunding page up to help offset the cost of travel for his team to Australia. You can help the Spider get there by contributing at http://www.gofundme.com/JonavinWebbUFC