The best wrestler in the United States today, Jordan Burroughs recently went onto Joe Rogan‘s podcast for an interview. Over their three-hour conversation, the two talked about a number of things, but what sparked our interest was when Rogan asked Burroughs about mixed martial arts. 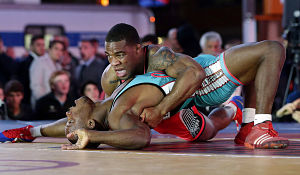 This has been a debated topic for some time now, Jordan Burroughs trying a hand at MMA. He’s so incredibly successful at wrestling, and there are a considerable amount of his peers that have switched over with great success.

Daniel Cormier is a two-time Olympian, placing fourth in 2004. He became a Strikeforce champion, before becoming a two-division UFC champion that defended both belts.

Henry Cejudo is another good example, only he won the 2008 Olympics. He then avenged his first defeat to one of the greatest of all-time in Demetrious Johnson, his initial title-winning effort, before defending it against bantamweight champion TJ Dillashaw.

Cejudo then moved up to 135 lbs and defeated six-time WSOF bantamweight champion Marlon Moraes for the vacant strap, and defended it against the greatest bantamweight of all-time, Dominick Cruz. 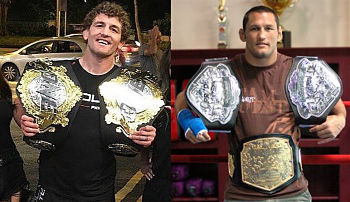 They all competed in modern mixed martial arts and had success, some more than others. Couture was a two-division champion with nine UFC titles, Askren is a nine-time world champion in Bellator & ONE Championship. 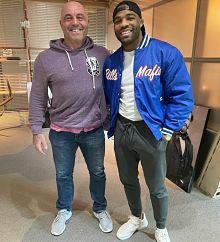 Madsen is still young in his MMA career, but has already started out at 10-0. Point being, it’s almost a sure thing Burroughs would be successful at the transition.

At one point on the podcast, Joe Rogan ended up saying the following: “First of all I think it’s amazing that no one’s talked you into doing MMA, it’s incredible.”

Jordan Burroughs responded with :”I’ve been close. Mostly the lady outside, my wife, Lauren, is the one that’s talked me out of it. When I graduated from college in 2011, University of Nebraska, wrestling was still on the brink of, if it was in its infancy of marketing and branding and really making it a professional career.

“MMA was the new kid on the block, and it was growing and expanding, and we had a lot of our guys transitioning in, Henry Cejudo, Ben Askren, Daniel Cormier, and so I really thought about it.

“I was like okay, I’m gonna wrestle in the Olympics in London 2012, win the gold, and then I’m gonna make the transition to MMA. I’ll be 25-years-old, I’ll have plenty of time, and then I met Lauren. And she’s like, ‘listen, you’re doing well in the sport, stay here, you’re comfortable.’

“It’s just a different, it’s a different sport, MMA in comparison to wrestling, but it’s a good thing.”

Joe Rogan: “It is a different sport, and it also has a lot more head trauma, and there’s a lot of things to consider.”

Jordan Burroughs: “One-hundred percent, that’s what I think about all the time. Listen, I think about going to MMA until I see a guy like ‘Platinum’ Mike Perry get his whole thing (face) split, nose crooked, (and) I’m like, eh, I’m good.

“(In) Wrestling, you score as many points as possible, while doing the least damage possible. In MMA, I feel like it’s different.” 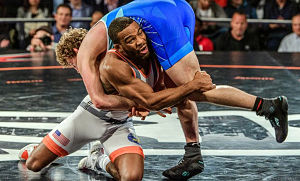 Burroughs was also interviewed by Luke Thomas in May of 2019 ahead of the 2020 Olympics, following his victory over fellow Olympian Ben Askren:

“It’s exciting, it’s exciting. It’s (MMA) something that I definitely consider. If I do consider fighting, it won’t be until after the Olympic Games in 2020. And then from there, I’ll reevaluate and see if it’s something that would be a realistic option for me.”

Of course, the 2020 Olympic Games did not happen, and are expected to take place this year in 2021.

Jordan Burroughs, if he did decide to take on fighting in mixed martial arts, regardless of his success in it, he’d be the greatest wrestler of all-time to make that walk. It’s absolutely astounding what this man has been able to do inside that circle in the middle of the mat. 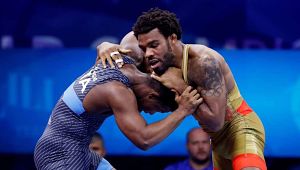 His credentials are endless, he really has done it all. It’s pretty extensive listing out someone like Ben Askren’s credentials, but Burroughs is a whole other level of accomplished, just as their match showed.

Firstly, we’ll start by saying he has a completed record of 115-20 in High School competitions, as he became a three-time District Champion, a two-time Regional Champion, a State Champion, and a National Champion, the last two of which he did in his senior year.

Fast-forward to his college days, where he went 128-20, which included a 15-3 run in NCAA Championship matches. He’s a two-time NCAA Division I National Champion, and a one-time third place at that tournament. In his junior year, the first year he won it, he defeated Gregor Gillespie 12-4 if that says anything. 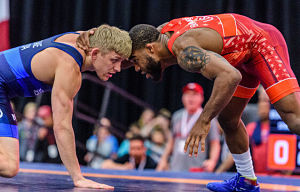 As far as international senior freestyle competitions, his record is 195-11. Of those 11 defeats, only two were able to out-score him by more than one point; the score was even in five of them, with him losing via criteria.

To win the championship every year he attended college, not to mention doing it in a weight class above each year, it’s extraordinary. Dake is the only man to have that historic claim, it’s absolutely remarkable. 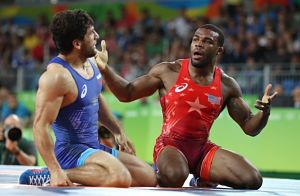 Burroughs has a 7-1 record against him, and for that one to be a 6-6 scorecard, against someone like Dake, Burroughs is easily the best wrestler in this country.

Burroughs won his next 39 matches, before losing his next two-straight, to our surprise. The first he lost was to Aniuar Geduev 2-3, who, once again, he defeated twice prior, and then to Bekzod Abdurakhmonov 1-11. 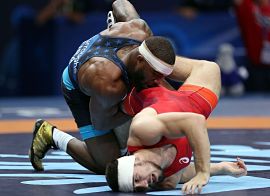 The thing that sucked for Burroughs the most about this, it was in the 2016 Olympics, where he’d just won gold in the last cycle, and was the favorite to win gold that year as well.

The Abdurakhmonov one was clearly a one-sided match, and spectators have a right to believe he just didn’t show up that night. Not only because it was so one-sided, but because he’d just comfortably defeated him 9-3 a month-and-a-half prior. The two wrestled one another twice more with Burroughs winning both 6-5 and 4-3.

So, in the 2016 Olympics, he lost to two opponents he comfortably defeated before. That had to sting a bit. 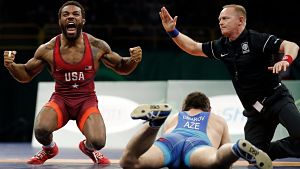 Next came his matches with Kyle Dake. Fast forward to his next defeat, which came to Frank Chamizo 10-10, who he’d defeated once previous and twice after. His next defeat came to Zaurbek Sidakov 6-5, who he wrestled once more, losing 3-4.

Aside from that, Burroughs only has two other defeats in freestyle wrestling. One to Isaiah Martinez 5-5, who he’d defeated three times prior and once after, three of those being in the same tournament, and David Taylor 4-4 on January 13, 2021, who he’d wrestled four times before, handily winning all four.

Medals and Championships in Freestyle Wrestling: