As we wrap up the 2016 calendar year many of us in the mixed martial arts industry are congratulating ourselves on another successful year. With only five days to go until Christmas morning, many fighters and trainers are choosing to fatten themselves on cookies, candy and holiday alcohol.

For many of us we’ve earned this break from coaching or competing. The idea is rather simple: We’ll be back on the horse in a few days since 2017 is right around the corner.

Since MMA is a sport with no season, we begin the year in competition and we end the year in competition. Fighters never have a time in the year where they can take time off to spend with their friends and family. There is no three month period where fighters can vacation in the Caribbean and truthfully – many of us simply couldn’t afford the luxury if we had the time available. Fighting is a constant grind of clashing shins, bruised knuckles and orbitals and burning muscles.

The athletes who are successful are the ones who are in the gym every single day working on their flaws. They are the gym rats who sacrifice their social lives for the chance to step into the ring to perform in front of screaming crowds. The best fighters, those with the most fans and with the most amount of buzz, are the ones who stay in shape year round waiting by the phone for the promoter to call. They are the unsung heroes that save cards in the twilight hours before an event – the men who step up on short notice willing to fight anyone at any weight class.

Kaheem Murray is one of those fighters. He’s a fight promoters’ best friend and a coach’s absolute nightmare.

In the four months that I have known and trained Kaheem he has taken four different fights in two different states for three different promotions. On December 31, Murray will be fighting his seventh amateur fight of 2016.

Kaheem takes on Brock Roderick for the 170 lb amateur Locked In The Cage title. 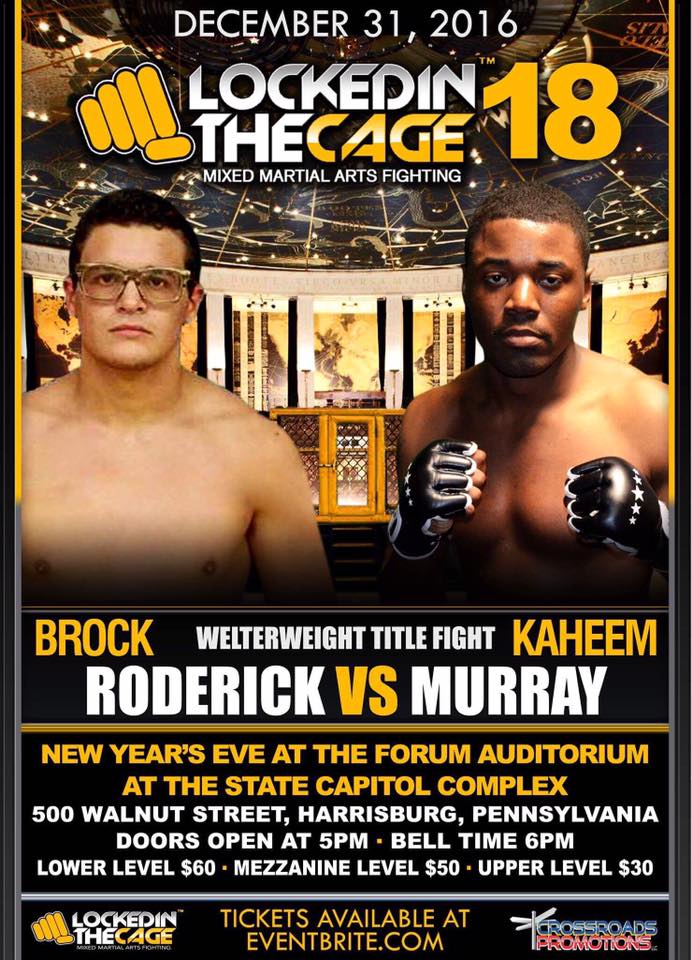 Sporting a record of 6-6, Kaheem is one of the fighters who may be unnoticed because of his split record. However, once you take look at his record you start to understand him as a fighter and you can then figure out why he is a fan favorite.

In the first half of this year Kaheem fought both Joe Schick and Ed Shupe in back to back fights losing decisions. He bounced back with a submission win over Christopher Williams in August at Stellar Fights 31.

Then he called in October and asked me to work his corner against Jules Knighton at WCC 18 in Philadelphia. That was the first time Murray and I worked together – and it was the first time I began to understand him as a fighter. Although he lost a decision to Knighton, Kaheem was able to learn from his mistakes and make adjustments.

After that loss, Kaheem and I started working together in a more significant fashion. He has surprised me with many things – his footwork, his wrestling, his ability to scramble and his very effective kickboxing. Most of all he has surprised me with his hunger to test himself against the best fighters around in several different weight classes.

Since we’ve started working together we have identified a few flaws in Kaheem’s fighting style and made some significant adjustments. We’ve started putting together great combinations while striking and we’ve developed an offensive counter wrestling style that left Branden Hudson unconscious in the second round at Stellar Fights 32 in November. Kaheem used that same style of fighting to hand Bart Pierre his first loss in a 3 round decision victory at WCC 19 just over two weeks ago.

With experience fighting in multiple weight classes under multiple rule sets Kaheem comes in at a significant advantage. His dedication to remaining active throughout 2016 means he is coming in with momentum, a new gameplan and a new identity as an exciting fighter.

I wouldn’t sacrifice my New Years Eve to corner any fighter but if there is one fighter who has earned my respect and support it is Kaheem.

Join us on December 31st at the Forum Auditorium at the State Capital Complex.

Locked in the Cage MMA arrives in Harrisburg on New Years Eve bringing with them the best in regional mixed martial arts. The fireworks start early when rising stars Mark “The Zombie” Krumrine, Mike Heffelfinger, Tyler Buckman, Chris Stanton and Devin Nelson go to war. Purchase tickets in advance at Eventbrite.com or the night of the event at the box office. Doors open at 5pm, first fight at 6pm. Locked in the Cage-The Battle at the Capitol, December 31, The Forum Auditorium!!

Jake Skelly is the Owner and Head Coach at Hands Up Studios at 333 Preston Ave in Voorhees, NJ. He is a Brazilian Jiu Jitsu purple belt under Rick Macauley and Brad Daddis and studied English Literature at Temple University.

By Brady Briggs 37 mins ago

By Lenny March 43 mins ago