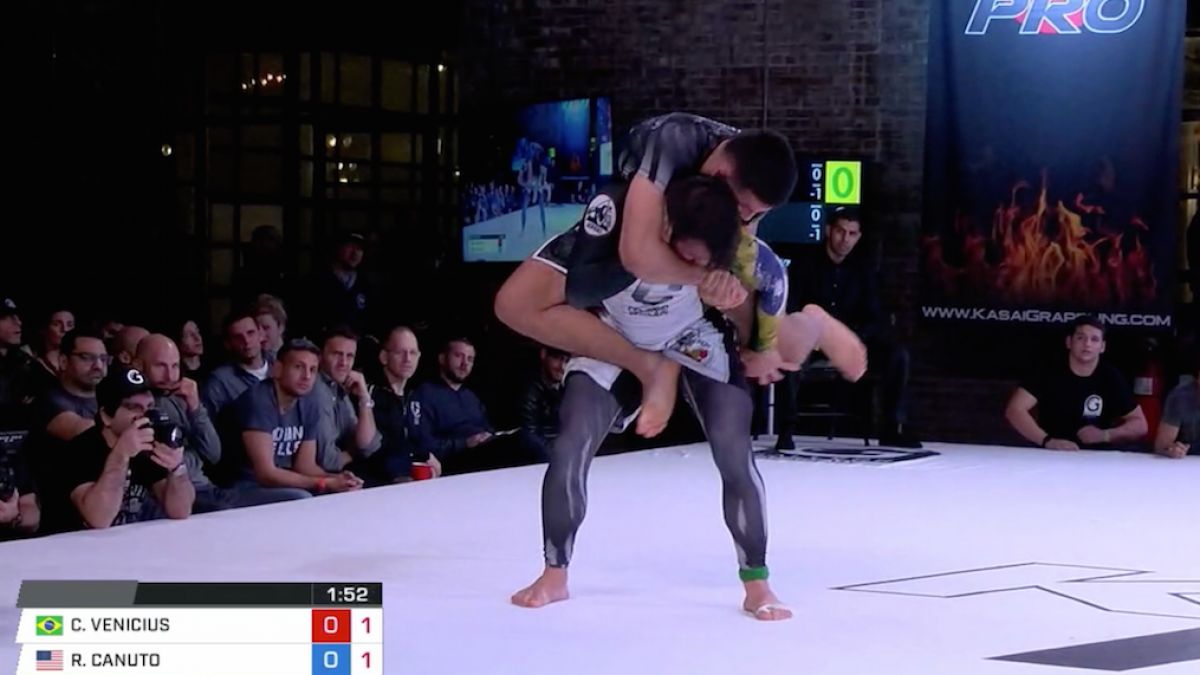 This Saturday, August 18, 2018, Kasai Pro will be hosting its third event, Kasai Pro 3, at the Hammerstein Ballroom in Manhattan Center, New York.

The event will be streamed live on Flograppling and features an 8 man round robin grand prix tournament for the welterweight title, as well as three main card superfights and a stacked undercard of superfights. Doors open at 5:30 p.m., with the undercard beginning at 6 p.m. and the main card starting at 8 p.m.

One of the many stand out match ups on Kasai’s undercard would be the featured undercard bout between Edwin “Junny” Ocasio and Ethan Crelinsten. Crelinsten is one of the rising members of the Danaher Death Squad and has made an appearance in ADCC as well as winning the Finishers Sub Only twice at two different weight classes. Junny has performed on the Kasai stage at their first event after winning the qualifier for the lightweight tournament. He also competed at EBI 15 and most recently this past weekend at the Finishers Sub Only 6. Both of these guys are extremely skilled and seasoned competitors so it should prove for an extremely entertaining match up.

Another match up to watch out for is Frank Rosenthal vs Ashley Williams. Rosenthal is another member of the Danaher Death Squad and currently holds two RISE Invitational titles at different weights.

He also competed at Kasai Pro 2, winning his superfight match by heel hook. Heel hooks will definitely be something for Ashley Williams to watch out for with Rosenthal, as many of his matches are won in that fashion like much of the death squad. Williams hails from the UK with a black belt under Chris Rees and has competed on the EBI stage more than once.

Just this past weekend, Williams went to a draw in a 10 minute submission only match with fellow EBI veteran John Battle at the Finishers Sub Only 6, and definitely appears to have been working a lot on his leg lock attacks and defense.

The match between Ryan Quinn and Jon “Thor” Blank serves as this event’s 10th Planet vs Danaher Death Squad rivalry match. It has been reported that Quinn is the one who actually coined the term “Danaher Death Squad,” and has been one of Garry Tonon’s main training partners. Quinn recently received his black belt from Renzo Gracie back in May of this year. Blank is a brown belt training out of 10th Planet Bethlehem under Zach Maslany and JM Holland. Holland, brown belt and combat jiu jitsu veteran, is also featured on the undercard in a notable superfight against Absolute MMA’s Mikael Yahaya. Blank will be following his coach’s footsteps and making his combat jiu jitsu debut September 29th in the first 16 man combat jiu jitsu tournament at EBI 17.

He also picked up a win this past weekend at the Finishers Sub Only 6 via heel hook. Both of these guys have a largely leg lock focused game, so it should prove for an intense battle for heels.

Nick Ronan is another one to watch out for on the undercard. Ronan trains at Serra BJJ is yet another member of the Danaher Death Squad to appear on this event. He earned an impressive win over Mike Davila at the first Kasai event. He also is a RISE Invitational champion and made it to the tournament finals in the Finishers Sub Only 6 this past Saturday.

He will be competing against Alex Miller of Hamptons Jiu Jitsu in his undercard superfight.

For the round robin tournament, Kasai divides the eight athletes into two groups, and after three 6-minute rounds, the athlete with the most points out of each group will move on to compete in the final. Athletes will earn 3 points for submission wins, 2 points for wins by points, and 1 point for each draw, so submission wins will be the goal for these competitors. The second place athletes from each group will compete for third place. Competitors in the 8 man tournament include Renato Canuto, current Kasai Lightweight Champion, Vagner Rocha, Marcin Held, PJ Barch, Matheus Lutes, Masahiro Iwasaki, Jason Rau and Victor Silvério, who is a last minute replacement for the injured Mike Perez. Flograppling recently broke down the details on each of the 8 tournament competitors in their 8-Man Grand Prix Preview.

Craig Jones vs. Rousimar Palhares is arguably one of the most anticipated superfights on the main card. Jones has become a fan favorite due to his devastating leg locking abilities and will be taking on an extra muscular Palhares in a 10-minute submission only match, followed by a 5-minute overtime period under KASAI tournament rules, if needed. A recent photo of Palhares seen below has gone viral due to the amount of size Palhares has put on recently.

It has also been reported that he is up to 212 pounds, and won’t be making the previously agreed upon weight for his match with Jones at Kasai. The two will be doing a day before the event weigh in at 200 pounds, according to Jones’ instagram. Much like Jones, Palhares is well known for his leg locks, and has also garnered attention due to his tendency to follow through and hold a submission even when an opponent is tapping. Fans will surely be on the edge of their seats for this one.

AJ Agazarm was originally scheduled to compete against Geo Martinez in a grudge match after AJ called out Eddie Bravo and 10th Planet at the last Kasai event.

Unfortunately, Geo suffered an injury at Quintet PR, so Gilbert Burns will be stepping in to take on Agazarm. Both men have strong wrestling capabilities so you can likely expect to see them wrestle it out on their feet to gain top control once it hits the ground. This superfight will be a 15-minute submission only match followed by a judge’s decision in the event of no submission finish.

Gianni Grippo will be taking on EBI champion Jon Calestine in another 15-minute submission only match followed by a referee’s decision in the event of no submission finish. Grippo is a Marcelo Garcia black belt and has had some amazing performances at IBJJF over the years, picking up world title after world title throughout his competition career. Calestine is a black belt under Daisuke Yamaji, Renzo Gracie’s first Japanese black belt, and also trains under Eddie Cummings and with Matt Kaplan at Bancho MMA. Calestine is best known for his wins at the Eddie Bravo Invitational, Onnit Invitational, Sapateiro Invitational and Finishers Sub Only and typically hunts for the heel hook submission as seen below.

It’ll be interesting to see this clash of styles between Grippo’s typical IBJJF competition background and Calestine’s submission only focused resume.

Vicente Luque vs. Michael Chiesa to meet at UFC 265 on Aug. 7