Marc Montoya, is a very busy man lately. The head coach and founder of Factory X flew to Chicago from Denver this week to help Megan Anderson and Anthony Smith for their fights at UFC 225. Then on Thursday he flew from Chicago to New York to help corner Steven Siler for PFL 1.

After Siler’s victory, Montoya took the time to talk about his travel schedule, Siler’s come from behind victory, Anderson and Smith’s fights at UFC 225 and what it means to him to see so many of his fighters rise through the ranks.

Did the fight with Steven Siler go according to plan?

Marc Montoya: “At the end of the day we are here to get a W and we’re leaving the cage with a win and Steven gets an opportunity to advance himself into the next round and that’s what we came here to do game plan and all that stuff doesn’t matter, at the end of the day what matters is that we get a win. Selfishly as his coach we get more time to work together and I get an opportunity to continue to help him grow as a fighter. This is our first full fight together, we were able to spend four weeks which isn’t a ton of time but it’s a start. With that said, by the next round we are hoping to continue to improve and see him get another w make it to that third round.” 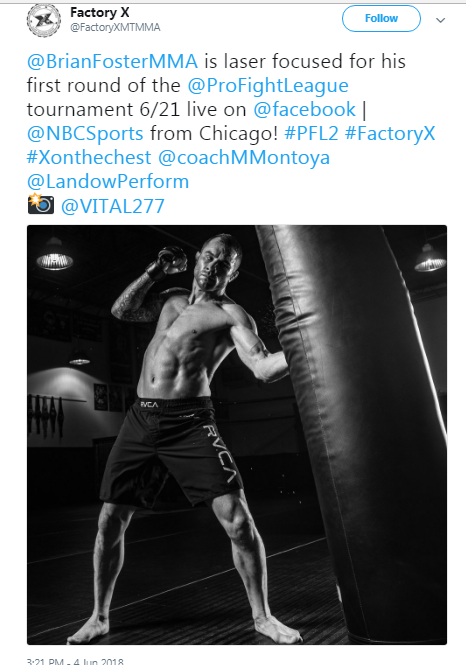 Is there anything different in preparing for fights in the PFL season since it’s a different format than other promotions are doing?

Montoya: “The biggest uniqueness in this is that they don’t throw elbows so one of his elbows is taken away, that limits us. I’ve done many tournaments, Dustin Jacoby has won several Glory tournaments where they fight three fights in one night, Brian Foster will be back in PFL on the 21st of June, he and I won the tournament for his division just a little over a year ago. The format isn’t something that’s unique, to me its that they don’t throw elbows, what I’m hoping is that we get to convince the PFL people to throw elbows in the finals.”

What is your mindset when having multiple fighters fight during the same week and having to work with different strategies for all of the fighters?

Montoya: “Well my mindset is I’ve been doing this for twenty years as a fighter and a coach, my mindset is what it’s always been and that’s to come here and get victories with my fighters. If that means that I have a lack of sleep for a weekend or a month or whatever it is, I’m in this like they are, I’m entrenched into this schedule like they are. So you know I had to travel from Denver to Chicago yesterday for the UFC, I have  Anthony Smith and Megan Anderson both fighting on Saturday, came to New York this morning from Chicago, I fly back to Chicago tomorrow morning for weigh-ins and then we fight on Saturday, I’m home for a day and we go to Australia (for Chris Camozzi), it just never stops right, so I’m just mentally prepare to do my job, we’ve done it on the mat and now its my job to do it at the cage.”

Talk about the fights for Megan Anderson and Anthony Smith, what are your expectations for them?

Montoya: “My expectations for Anthony Smith and Megan Anderson are the same as they were for Steven Siler, let’s go get a w. So we’re looking forward to showing off what they’ve continually learned and have been drilling and doing in practice. Both of those fights are another direction to catapult their careers. I’m super excited, it’s a great weekend for us, we started off right here at PFL with a victory and we’re looking to get two more on Saturday, Anthony and Megan are prepared and we’re ready to rock and roll.”

For Megan Anderson, she has had to wait a long time to make her debut, she was originally supposed to fight Cyborg and now she is facing Holly Holm, how do you prepare her mentally to get back into the cage after such a long layoff?

Montoya: “The preparation that we’ve had to do with Megan has been of course its physical on the mat, she trains full time in Kansas City with James Krause, James Krause is actually one of my fighters that I’m his head coach of, James and I have collaborated with Megan in the past, the biggest thing is getting her mentally prepared. I’m not a big believer in ring rust, especially if a fighter will stay active on the mat and she’s done that. So from her last Invicta fight till now, she has continually improved an been on the mat. She’s just getting better, she hasn’t missed a beat when it comes to that side. Getting back into the cage is obviously her intention. So we’ve had a bunch of time to create a monster and that’s what you’ll see on Saturday.”

How cool has it been for you to see Factory X grow into one of the biggest fight camps around the world with fighters fighting on the main card of the UFC and up and coming fighters winning impressively such as Ian Heinisch, Youssef Zalal and Derek Brenon?

Montoya: “It means the world to me, we’ve been extremely blessed to have the success we’ve had to this point. It’s been nothing but just love and a lot of hard work. I built a culture years and years ago that I wanted to sustain and then I’ve I continually found the kids that will help grow that and continue that culture.

“With that said, you know, Youssef, Ian, Brandon, Derek all those kids that you brought up, Steve, all these guys that are coming up and making waves or maybe  they’re vets and they’re still doing, those are the things we’ve built, not just me, it’s been a collective group and a team effort to get where we’re at. I feel extremely blessed to have all these athletes believe in me and my vision and I’m just here to continue to help guide them.”