Max Holloway has had a much different approach to his training camp ahead of his featherweight title rematch against Alexander Volkanovski.

Last week, “Blessed” told ESPN that he did not spar in his preparation for this weekend’s co-main event. Aside from not sparring, due to safety measures during the current COVID-19 pandemic, Holloway also did not work with his coaches in person.

While many would find that as a problem, especially since Volkanovski took Holloway’s championship at UFC 245 in December, Holloway told MMA Junkie that he is not worried. 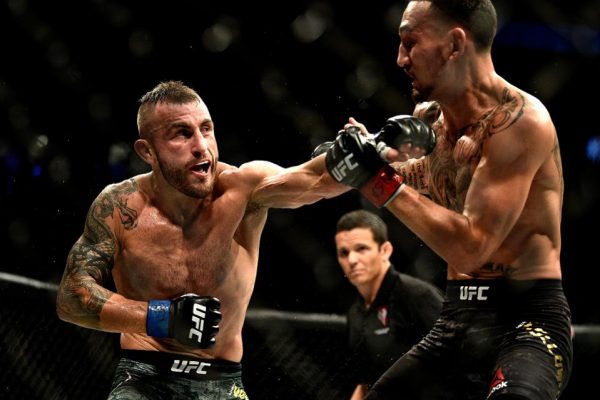 “I know everybody’s blowing their mind, tripping out,” Holloway said to MMA Junkie. “I’ve been fighting my whole life. I’ve been fighting since I was 16. That’s a long time. I did a lot of sparring in that time. In the beginning of my career, all I really did was spar. This is another fight, at the end of the day.”

Holloway (21-5) handled his loss to Volkanovski (21-1) with class, even though he feels like he won the fight.

“Never leave a fight to the judges; they’ll make you cry,” Holloway said. “No excuses. I thought I did enough, but obviously it wasn’t. There’s three guys’ decisions that matter. They all went the other way.

“When (Saturday) comes, I get to prove that I’m one of the best guys in the world still, and I just can’t wait. This time, I’m going in there and do my thing, and hopefully we won’t need the judges.”

Holloway has remained cool, calm and collective ever since losing the belt, meanwhile Volkanovski has been wearing his confidence on his sleeve. While Volkanovski see’s himself defeating Holloway again, Holloway remains relaxed and is not buying into Volkanovski.

“I’m a fighter, and that’s what we do,” Holloway said. “It’s only a loss if you never learned. I learned a lot, and I found a lot about myself that night. But at the end of the day, I don’t know what he’s going to do. I can’t really take what he says too serious.

“Last time, before the fight, he said he was going to take me down and TKO me, and we all know that didn’t happen, so I’m just ready for the best version of him. I can’t wait to go out there and do my thing.”

On Saturday, the talk will be over as the two will meet inside of the cage and Holloway wants to remind everyone not to miss this fight.

“I’ve been in the cage with this guy before; I know what he brings to the table,” Holloway said. “I know a lot of his game. I can’t wait. Going out there, this fight, I got to actually focus on me, focus on my body, focus on recovery, and I feel great, man.