Meet ONE Championship flyweight champion Adriano Moraes, also known as ‘the only man to ever finish perhaps the greatest mixed martial arts fighter to ever

That’s just what Moraes did in his last outing, as he defended his title against former 12-time UFC flyweight champion Demetrious Johnson via TKO (knee & punches) back in April. 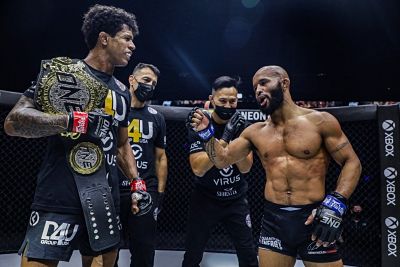 Moraes isn’t new to this however, he’s actually been at it for exactly a decade, making his professional debut in September of 2011. Nine-straight victories would follow, ending with the Shooto flyweight championship, before making his ONE Championship debut.

After losing this bout via split decision, he’d win two in a row, before claiming the ONE flyweight championship for the first time. Mind you, all three of these wins came via submission. One defense would follow via five round unanimous decision, before losing another split decision, and his belt.

Moraes secured another submission victory before claiming the interim title, also via submission. Next came his title unification bout with the man to take his throne, Kairat Akhmetov, who was 23-0 at the time, and he won the rematch convincingly to recapture his prestigious title.

Akhmetov is 27-2 today on a three-fight win streak.

Another title defense would follow before losing it for a second time, once again via split decision. He reclaimed it in the immediate rematch however, and was then matched up with Demetrious Johnson.

After losing his rematch to Olympic gold medalist and future UFC champ-champ Henry Cejudo, Johnson decided to move over to ONE Championship, where he captured three-straight victories, and the ONE Championship flyweight gran prix belt, prior to challenging Moraes for the undisputed crown.

It was a very competitive fight while it lasted, but Moraes landed a flush uppercut that dropped the former champion in round two, then followed it up with a brutal knee and some more punches to get the stoppage, to most of our surprise.

But, as you see, Moraes is a legit champion. He boasts a black belt in Brazilian Jiu-Jitsu, he’s a long, rangy, and effective striker, and he’s a two-promotion champion.

Not to mention, all three of his defeats come via split decision, and two of them, the latter two, have been avenged.

Who would you like to see Adriano Moraes make his next title defense against?