Rick Nuno is a fighter who I have had the pleasure of dealing with since my own career in media and production started many moons ago.  As a fresh faced amateur and now having been through many wars, Nuno has always remained one of the most upbeat, lovable guys I have met.  He has made many relationships in the sport and that is not surprising with his engaging personality. 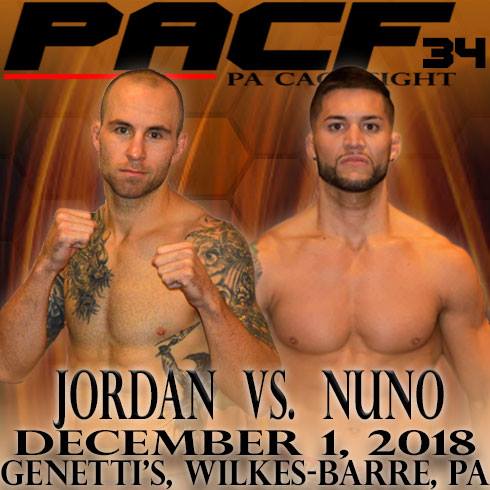 Nuno will be battling an old friend when the cage door closes behind him on December 1 at PA CageFight 34.  Jimmy Jordan is a familiar foe since they have trained together many times.  Nuno expects this to be a sprawl and brawl type fight.  He wants it no other way.  Nuno tells me…

“Striking has always been me.  It’s what I love to do.  It’s why I have dabbled in boxing.  As a matter of fact, this will most likely be my last MMA fight.  I took this fight because I liked it.  I’m very familiar with Jimmy and I knew there would be no ill will from his side or me because we have trained together in the past.  In the future, I will be concentrating on furthering my boxing career.  The travel over the years has worn me out and now I can concentrate on one thing and continue to get better.  But you never know.  I’m a fighter and if a situation arises. I may not be able to say no.”

Nuno is a fighter.  He will take on anybody without hesitation and will leave it all in the cage every time.  He is continuing to work with his 10th Planet Jiu-jitsu team for this fight as well as his new boxing coach and has also been working with Scott “The Animal” Heckman to prepare for battle.  He has a long list of people who have helped him over the years.  Please listen to our interview in the link below.

MyMMANews will be cageside for live results from Wilkes-Barre, PA on December 1.