Louis Neglia and Dead Serious Promotions are nestled into their regular spot at the Showroom of the Tropicana Casino and Hotel Resort in Atlantic City, New Jersey for another stacked fight card.  The event will be broadcast live on UFC Fight Pass. Visit the UFC Fight Pass site to get a FREE 7-day trial and watch ROC 69.

The Ring of Combat 69 main event will feature a middleweight championship battle between Matthew Foster and Joe “Bodybagz” Pyfer.

Pyfer has been spectacular in all five of his fights thus far with four finishes and a dominant one-sided decision.  He brings an army of fans and they will surely be on their feet when he comes to the cage trying to take another step into his bright career. Foster has 10 wins to his credit and looks to quiet the crowd.

The co-main event features a superfight at 145 lbs between Matt Probin (4-0) and “The Jaguar” Tim Dooling who is 7-5 but has fought all of the top competition regionally and only been stopped once.  This could steal fight of the night.

Another name to watch out for is Lenny “The Gorilla” Rufati.  Lenny has relocated out to Wisconsin and trains with the monsters at Roufusport.  Rufati has started out quickly at 3-0 and faces the very talented Troy Green (1-0).

Full Ring of Combat 69 results below:

R1  very fast paced start. knee caught by Escareno into a takedown.  Back to feet and another takedown from Escareno.  Leg lock attempt from Maldanado. Back to feet as round ends but Escareno controlled positioning most of round

R3 Early takedown from Escareno.  Back to feet.  Not for long.  Another scoop and takedown,  pace has slowed.  Escareno comfortably in control from Maldanado’s guard.  Some ground and pound scores.

R1  Holy hell.  Fight starts out fast for Flores as he lands several knees and a cross but Kanekoa stands tall and comes back with a devastating combination with a spinning back elbow to a hook that knocks him out

R1  Very even fight 1 minute in with both guys landing some hands.  Mantello w a nice double leg takedown and is trying to posture up.  Good job tom keep it tight by Hughes.  Escape from Hughes and comes up throwing, last 15 seconds of the round was strong for Hughes

R2  Nice right from Mantello.  Hughes is a tough SOB.  Hughes looking to land his jab.  These guys are punishing one another.  Huge right from Mantello knocks Hughes down.  Hughes recovers and has guard.  Back up to feet.  Hughes just keeps coming forward.  Hell of a battle.  Great fight thus far.

R1  Immediate takedown from Vilson.  Stands and locks in a guillotine.  Johnson is out.  Looking for a head and arm choke.  Johnson back to his feet but Vilson continues grappling and gets another takedown.  Heavy ground strikes from Vilson. Dominant round for Ndregjoni

R2  Big right from Johnson as round is on feet early.  Nice sprawl from Johnson.  Obvious who the wrestler is here.  Johnson doing a good job this round avoiding the takedown.  Vilson has him against the cage and picks him up and  drops him for the takedown, now.

R3  Holy S…….  Johnson anticipated the early shot and side stepped and jumped the back and choked Vilson into a tapout via RNC

Winner via submission RNC Andrew Johnson 46 seconds of round 3

Jimmy “Babyface” Lawson is a former wrestler from PSU.  He is taken down by Smart in a role reversal.  Aljamain Sterling barking instructions to Smart from the corner.  Smart still in the guard of Lawson.  Gasper Oliver stands them up. Calf kick from Smart.  Lawson lands a 1-2.  Smart comes back.  Smart still chopping at Lawsons leg.  Lawson finally opens up and Smart is covering up.  Bell may have saved him.

Lawson shows no inclination of looking for the takedown and wants to stand.  Exchanging body kicks.  Lawson now has him pinned on cage as Smart is on one knee.  Lawson pounding away and the referee stops the fight after numerous unanswered punches.

R1 Lenny looking to make it a grind.  Forcing Green up against cage.  Green spins out and lands a knee.  Couple knees to the thigh from Green.  Most of round was in clinch

R2  Rufati with a quick  takedown but Green right up.  Rufati controlling positioning.  Green pushed up against fence.  Entire fight has been in the clench.  Knees from both guys land.  A total grind

R3  More clenching.  Green secures the takedown.  Green looking for the back.  Rufati defends takes couple punches.  Lenny is up to his feet.  Rufati with the takedown and Green now reverses.  Last minute of fight was all clench.

R1  Anthony “Parmesian” Facchini the southpaw scores a takedown and is in the guard of Andrew “Ice Cold” Salas.  Fight is back to the feet.  Salas has Facchini pinned on cage as they clench.  Pick up and slam from Salas with the takedown.  Round ends as Salas throws punches.

R2  Clinch early as Salas has Facchini up against cage. Seperated  and Facchini throws a left hand and kick.  Salas scores a takedown.  Salas has been in control most of the round as he has kept Facchini on his back.

R3  Big slam from Salas as round opens.  Facchini w a reverse and now half guard as he lands ground and pound.  Parmesian in control.  Salas gets up and now gets his own takedown.  Reverse from Facchini.  Now he has the back.  Salas w an escape.  Salas on top and landing as fight ends.

R1  Dooling has been pushing the pace with Probin countering.  Very technical striking match so far.  Probin attempts a head kick, Dooling ducks it and secures the takedown.  Into the guard as Dooling tries to posture up.  Very good first round

R2  Fun fight to watch with both guys scoring on combos and kicks.  Great matchup.  First clinch of the fight with 10 seconds left in the round.  Nonstop action with a very tough round to score

R3  Dooling goes for the double leg and is successful.  Now looking for the back and neck.  Clear ground advantage for the Jaguar, Tim Dooling.  Body lock secured.  on the back landing strikes. Rear naked choke is close and that’s it.

R1  Bodybagz comes charging with a head kick that is blocked but picks up Foster for a powerful slam and takedown.  Landing brutal ground and pound. Fight is over,  Just a friggen monster as the crowd chants Bodybagz Bodybagz.

Winner via TKO due to strikes Round 1:07 and new ROC National middleweight champion Joe “Bodybagz” Pyfer

Joseph Pyfer defeats Matthew Foster via 1st Round TKO AT 1:07 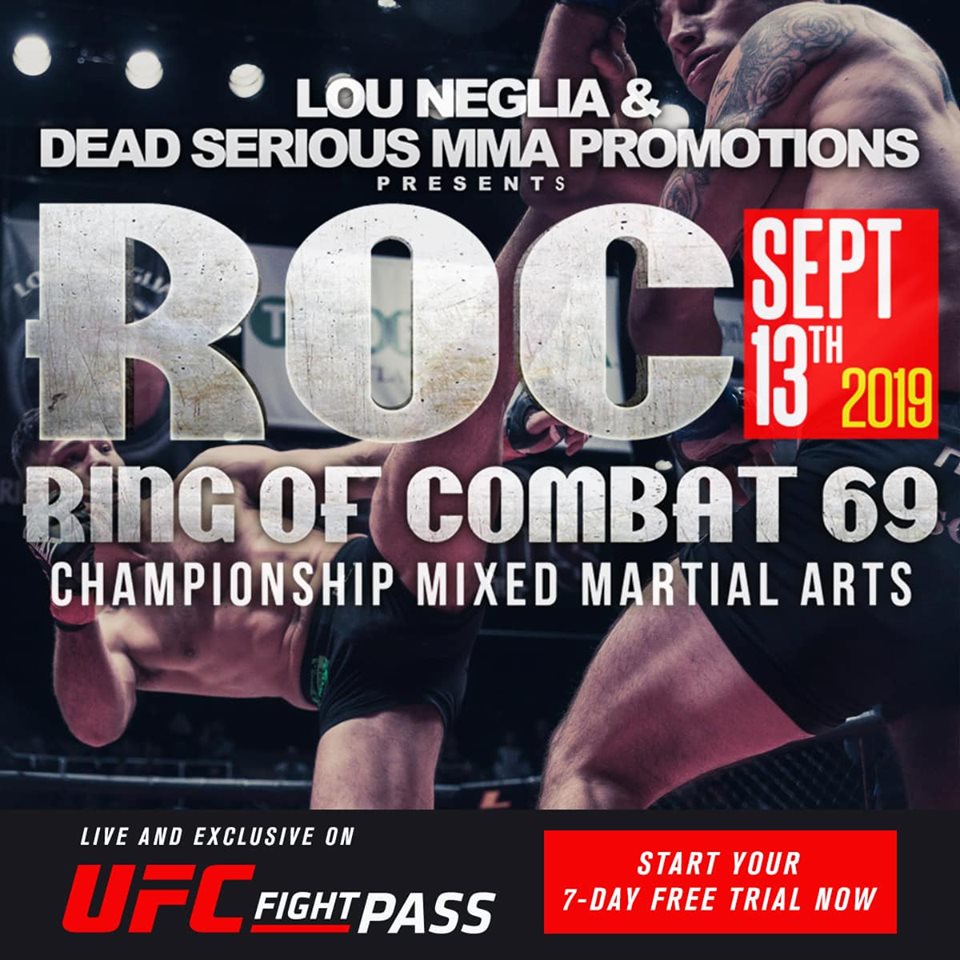 By Bjorn Morfin 32 mins ago