Scott Heckman out of retirement, signs with Maverick MMA

‘The Animal’ is back.

Heckman will return to the cage April 7 with newly organized promotion Maverick MMA.

“Scott is a pioneer and legend in east coast MMA. He’s a multiple time champion and I’m so happy for him and his family that he is back doing what he loves. We were also able to get another local MMA legend in Steve McCabe. Steve has over 25 fights and has been in there with guys like Frankie Edgar.

I’m excited and proud to have both guys headline our first show.

The card is filling up fast, so contact Mike Bickings today for your chance to be on this historic first card. Tickets go on sale this week.”

He will be taking on Steve McCabe (7-19), a Martinez BJJ prospect out of Philadelphia.

Heckman On The Comeback

“The reason why I retired from fighting was because it was not fun anymore for me. I was tired of all the politics that came with the sport. The hassles of contracts, and finding a decent opponent started to become more time consuming and draining then training for the actual fight. I also had a lot of personal issues going on in my life that didn’t allow me to mentally train the proper way I should have. So, I decided to take a step back completely and focus on my family. I was able to spend the time with my two children, Adrianna and Bently, and I was also able to give my wife the time and support she needs from me.

“From stepping away I was able to refocus and find that fire again. I’m a much different fighter then I was when I started fighting in 2009. My life has changed so much, for that I am extremely thankful and I was able to find a reason to get back into fighting. This fight would be for my family.”

The event will be held at the Sherman Theater in Stroudsburg, Pennsylvania. 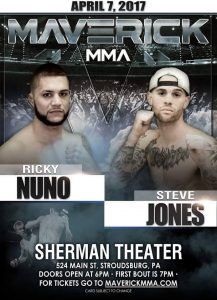 Nuno has not competed in MMA since December 2014.

The 31-year old fighter has not been sitting on the shelf however as he has competed in several boxing matches.

That was Jones’ first fight back in more than two years.

“I’m pumped to see Ricky’s hands in his return to MMA after two years on the boxing circuit. Steve Jones is an exciting young fighter and will look to spoil Nuno’s return to the cage,” Sisca said.

Sherman Theater is located at 524 Main St. in Stroudsburg.

By Lucas Grandsire 7 hours ago

By Ashwin 13 hours ago

By Mary Hartman 13 hours ago