Imagine putting in over a decade of hard work for one specific goal.

Imagine finally getting the news that your work paid off.

Now imagine days later being told that your dream fell through and to go back to the drawing board.

This is what Sean “Shorty Rock” Santella faced when the call he eagerly waited, came, but then days later, opportunity slipped out the door.

Over an eight year professional mixed martial arts career, Santella put together a 15-5 record going against top-notch competition.  If you look at his fight record according to Tapology, Santella has seen nine fights get cancelled after being announced, and that’s just in the past two years. He is the former Cage Fury Fighting Championship flyweight champion and has defended his title more than any champion in the organization’s history.

He was widely regarded as one of the top flyweights outside the UFC.

In July Santella finally got the call up to the big show to compete against Wilson Reis at UFC 201 in place of flyweight champion Demetrious Johnson who was out with injury. It was a short notice fight but the lack of preparation time did not enter into on the decision for Shorty Rock to take the opportunity.

Unfortunately, days later he found out his medicals would not be in on time to get cleared by the commission and his fight was cancelled.

When asked about the news Santella said, “I was crushed, but I have a great support group to helped me get past it and move forward.”

Shorty Rock waited for another opportunity but nothing materialized. Based on his resume, many do not understand why he has been passed up. This perplexed one of Santella’s trainers, UFC vet Nick Catone.

“Sean needs to be in the UFC. I feel he is right with the top 10 guys in the world and it’s crazy he’s not there. Once he gets his shot everyone will see what all of us in the gym already know,” Catone said.

Without the call up, Santella opted for the next best thing. He took a fight for the CFFC interim flyweight belt against another top prospect who many feel should be on the big stage as well.

Matt Lozano is a World Series of Fighting and Bellator vet with an 8 – 3 record. He rode a four fight win streak heading into their CFFC showdown.

Many would try to shy away from such a tough matchup being so close to signing with the UFC but Santella does not share this mindset.

When asked if there were any second thoughts about taking the fight, Sean said “There wasn’t hesitation. I don’t like sitting around and waiting. I like being active.”

The fight was cast as a typical striker vs. grappler match up.

While Lozano is no slouch on the ground his credentials are far below Santella’s. The same can be said in the stand up area favoring Lozano.

The first round was surprising with Santella not only showing he can hang with Lozano on his feet, he was actually showing an edge landing some very accurate strikes. Santella closed the round out with a takedown to leave no doubt that he took the first. In the second Santella seemed to come into his own landing strikes to his feat and securing a takedown then getting his back.

Santella was very active, bloodying Lozano up with elbows and threatening with various submission attempts. Santello closed it out in the 3rd with a rear naked choke, earning the interim title.

“I took the back, that’s my thing”, Santella stated after the fight.

Shorty Rock recalled disappointment in his last fight despite a dominant win.  Santella remembered that he got that position many times but couldn’t get the submission.

“There is no reason if I take the back on any flyweight in the world that I shouldn’t get the finish.”

He said he went back to the drawing board and worked on what went wrong and corrected for this fight.

With a dominant performance it seems like Santella is more ready than ever to make noise in the big show.

“Every time I step into the cage, as you can tell, in the last two years I get better and better and its going to keep going. The sky is the limit.”

CFFC commentator and current UFC lightweight Paul Felder referred to the UFC as the next step in Santella’s career as a “no brainer” after that performance.

If for some reason that does not come to fruition there is a marque matchup to unify the CFFC title with current CFFC flyweight champ, UFC vet, Louis Gaudinot.

“There is only one fight that could possibly make sense (outside of the UFC) but I don’t think he’s going to fight me and that’s Loius Gaudinot,” Santella stated after the fight.

It would be a great fight if it does materialize. Although, I think many in the area feel it would be a robbery if Shorty Rock’s next stop is not the UFC.

“I belong in the UFC” said Santella “I’ll mix it up real quick”. 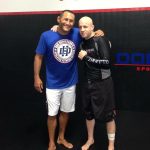