A few weeks ago we discussed the International Judo Federation’s four year ban due to the Iranian actions in the 2019 Tokyo World Championships. In those World Championships, Iran instructed one of it’s judoka, Saeid Mollaei, to lose a match intentionally as to not face Isralei World Champion, Sagi Muki. Today, we will be going into that story in a little more detail in order to provide some context as to what happened and what recourse Mollaei faced after coming out with the truth.

In 2016, Saeid Mollaei was a competitor at the 2016 Rio Olympics, something every athlete dreams of. He had the chance to represent his country on the biggest sporting stage in the world. It was a momentous occasion. While he was eliminated in the first round, just the opportunity to fly from Iran to Brazil is an opportunity most would give so much for. Mollaei did just that.

Then he entered the 2019 Judo World Championships being held in Tokyo for the year. Mollaei looked to defend his title. But his entire life would be uprooted during this tournament that most people will never have to experience. From a World Champion to a political pawn, Mollaei would have to make the toughest decision of his life: relinquish his free will or come out with the truth.

Saeid Mollaei started out the tournament doing fantastic. He won his early matches all by Ippon. His next match was a make-or-break match for the Iranian. Mollaei was to face Khasan Khalmurzaev, the 2016 Olympic gold medalist out of Russia. A win over Khalmurzaev would show how much he had improved and would avenge his elimination from the Olympics which came by the hand of Khalmurzaev. This was it. Before the match, his coach was called by the Iranian first deputy minister of sport. He was told to pull Mollaei from the match so not to have a chance at facing Israel’s Sagi Muki, a judoka with a hot streak going himself. In addition to that, the deputy minister not only demanded Mollaei to be pulled from competition, but threatened his family in the process. Saeid Mollaei had just become a pawn. Even a pawn cannot kill a king by itself and Mollaei would have to get the help of those around him to right this injustice and degradation of sport.

That’s when Vahid Sarla, a coach from Tajikistan, approached an official for the Judo tournament, Lisa Allan. He told Allan that Mollaei needed her help. Mollaei then asked to go to the top and speak with Marius Vizer, the IJF President. He was quickly seen by the president. After he explained what happened, Mollaei was told by Vizer that he had two options: listen to his country or fight for what was right. Mollaei ran to the mat ready to compete. Saeid Mollaei avenged his loss beating Khasan Khalmurzaev and advancing to the quarterfinals. Antoine Valois-Fortier of Canada was next, an Olympic bronze medalist. Mollaei would defeat him as well. Matthias Casse was next in line with Muki waiting in the finals.

All during the day Mollaei, his team, and his family were receiving threats from the regime. The Iranian Embassy showed up to the venue and illegal went to the warmup area and intimidated Mollaei again. Just before the match with Casse, World Champion Reza Salehi Amiri calls the coach. He was told that National Security had arrived at his father’s house and threatened him as well, asking him to speak with his son.

The stress and potential consequences finally got to Saeid Mollaei and he dropped his match to Casse. Having beat an Olympic Champion and bronze medalist, Mollaei had nothing to hang his head about. He was a champion already, a champion of sport. A light to those who live in the dark world that would seek to corrupt just competition in the name of anti-zionism.

Living with the consequences of your actions, even if they’re just

Despite doing what is ethically and morally just, Saeid Mollaei now has to live with the consequences of his actions at the 2019 Tokyo Judo World Championships. While the regime did tell Mollaei that he could return to Iran, the judoka didn’t feel as safe. Instead, he was given asylum in Germany with the help of the IJF. With what we know about Iran and the executing of athletes, Mollaei has every right to be concerned with his safety in returning to the country he once called home.

But, it all was not in vain. While Mollaei cannot return to Iran, the IJF took swift action and indefinitely banned Iran from competition. We now know that ultimately, the country would receive a four year ban. But, it’s a step forward to fixing Iran’s injustice towards it’s citizens and athletes, something that has been going on for decades.

Mollaei was also added to the IJF refugee team, which paves the way for him to compete at the Tokyo Olympics and help him achieve his goal at becoming Olympic Champion. Mollaei was also given the Crans Montana Forum medal for the decision he made in Tokyo. The organization’s purpose is to build the world “Towards a more Humane World.”

Then, in December of 2019, Saeid Mollaei was offered full citizenship by the Judo federation of Mongolia, to which he accepted. The switch saw Mollaei removed from the IJF refugee team and he’s since competed under the Mongolian flag. 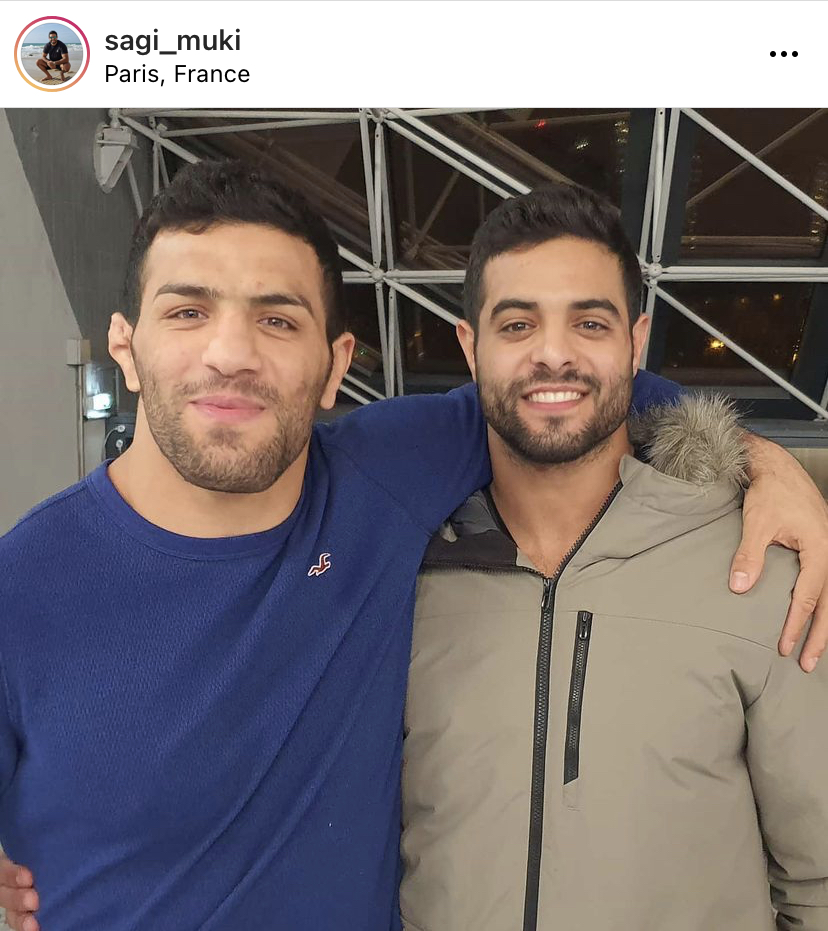 Friend for life!!!
Tag Israel and Iran people for peace!
#israel #iran #love #peace
I met him at Grand Slam Paris.
Two world champions but before that two good friends…

Sagi Muki hasn’t been blind to the harm Saeid Mollaei has put himself and his family in. On Instagram, Muki has expressed support for Mollaei, and the two have even trained together since. Those gym wars are likely some of the best judo of all time should you be able to see a behind the scenes video. In fact, Mollaei has even traveled to Israel to train for the 2021 Tokyo Olympics.

After the dark times, Saeid Mollaei has a lot to look forward to. He’s isolated from his family and cannot speak freely to them, but his standing up for what he knows is right has paved the way for more in the future as Iran continues to break the rule of sport. With the 2021 Tokyo Olympics approaching, the IOC approved his citizenship switch to Mongolia, another hurdle cleared for Mollaei.

While his journey has been tough, dark, and quite honestly, terrifying, Mollaei has done the right thing for humanity. Looking past race and politics, sport is a way to transcend the turmoils of life, racism, and prejudice that certain areas of the world commonly like to focus on. With the upcoming Olympic Games, Saeid Mollaei’s story is just beginning. Even if he falls short of his goal of becoming a gold medalist, what he’s accomplished already is enough to be immortalized as one of the most important judoka of all time.

The mission is far from over. Iran continues to refuse to allow it’s athletes compete in fair competition. They still execute athletes. They still recruit athletes for a political killing force under the Basij. Mollaei’s sacrifice is just the first in a long line of sacrifices needed by people of the world to make it a better place.

Iran has a history of mistreating athletes. Below is our complete coverage on the country’s human rights violations.