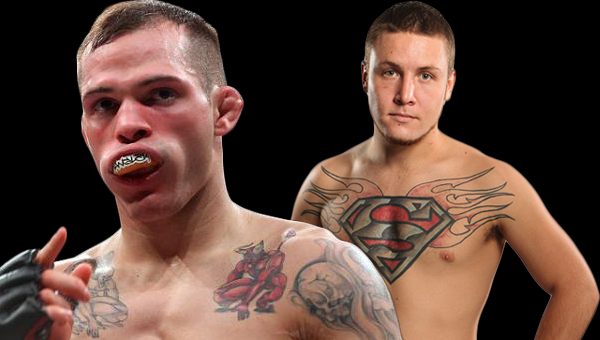 Dana White’s Tuesday Night Contender Series has quickly established itself as the foremost platform for UFC hopefuls. Building on the momentum of a successful first season that saw fighters like Sean O’Malley, Kurt Holobaugh, and Julian Marquez all earn UFC contracts, the sophomore campaign has picked up right where the first season left off.

Steven “Ocho” Peterson was one of those 26 fighters to earn a contract last season; the war he and Benito Lopez were in was nothing short of a bloodletting. MyMMANews caught up with Peterson to talk about his up coming fight against Matt Bessette, Fortis MMA, Cryo-therapy, and more.

Peterson is familiar with Bessette, after all they both earned contracts on the first season of the TNCS and they both fight at featherweight. A notoriously hard trainer, “Ocho” now believes the key to beating Bessette will be in his recovery. “I’ve never felt better,” Peterson explained to MyMMANews exactly one week out from his TUF 27 Finale contest.

“I’m used to pushing myself way to hard, I grind myself down to where I’m all beat up on fight week. This time it’s a lot different, I’ve been taking care of my body, I have more energy, and I’m just so much healthier.”

Having your mind and body in tune and on harmony can do wonders for an athlete. Surrounding yourself with positive like-minded people may be equally as imperative; Peterson achieves this at Fortis MMA. “When all the best guys around Dallas come together in the same place, it makes for greatness,” “Ocho” claimed.

“We [Fortis MMA] have seven or eight guys in the UFC now. In the past year we have been making a big name for ourselves in the sport.” Peterson continued, “We don’t need to go to other states or countries to train, its all right here at Fortis. Steal sharpens steal!”

Indeed, it does. And indeed, Peterson is much more than just a fighter, he has a stake in a number of businesses around the Dallas area and of course his own MMA lifestyle brand Fight Fit Lifestyle, all of which are flourishing. “Business is going great,” Peterson exclaimed.

“[We’ve] Been working on profecting our gear,” explained “Ocho”. “With the money from my last fight I bought a Cryo-Therapy machine, so now we have been offering Cryo treatments at one of the gyms I train at.”

To borrow a rather cheesy tagline from the 80’s- Peterson is not only the president, he is also a client. Substitute the word president for the word owner and Walla! “I use the Cryo treatment four or five times a week,” Peterson said.

“Whenever I go through a real hard training session I hop in there, it gets the inflammation out, so you can recover quicker.

Steven “Ocho” Peterson will take on Matt Bessette at the TUF 27 Finale on July 6th in Las, Vegas, Nevada, live and available on FS1, you will not want to miss this one.

By Alex Behunin 22 mins ago

By Andy Stevenson 36 mins ago