Conor McGregor (22-4) returns to the octagon this weekend at UFC 257 when he meets Dustin Poirier (26-6) in the night’s main event.

The lightweight bout on Fight Island in Abu Dhabi will serve as “Mystic Mac’s” first appearance since his shocking first round finish of Donald Cerrone one year ago at UFC 246.

McGregor and Poirier first met more than six years ago at UFC 178 where the Irishman put the “Diamond” away in the very first round.

Both fighters have evolved tremendously since their last outing and the folks at Betway Insider took a closer look at 10 key moments that led to this epic rematch. 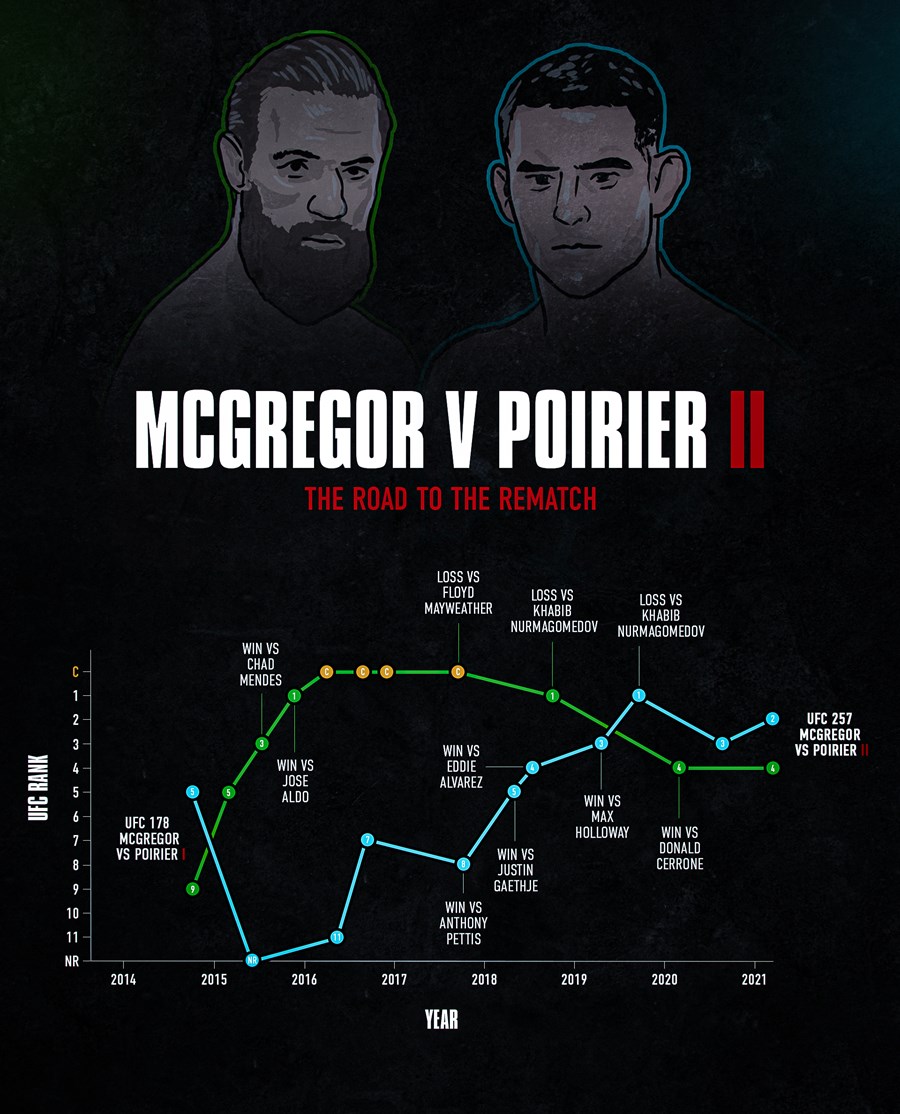 The above infographic was created by Betway.

Poirier heads to Fight Island above McGregor in the rankings, at No. 2 and No. 4 respectively.

While Khabib Nurmagomedov might currently hold the UFC lightweight title, a championship belt which once was owned by McGregor, the Russian fighter’s status is still currently unknown.

Yesterday at UFC Fight Island 7, UFC President Dana White stated that he had a conversation with Nurmagomedov who expressed interest in looking at the upcoming McGregor-Poirier rematch to see if there would be motivation for him to return following his retirement announcement last year.

Another pivotal lightweight bout hangs in the balance as well as former Bellator MMA champion Michael Chandler makes his UFC debut against a very tough and game Dan Hooker.

Nurmagomedov said that “something special” would need to happen in either one or both bouts that would light a fire in him, and bring him back to action.

Throw in the fact that Poirier himself is a former interim lightweight champion and the stakes at UFC 257 have risen to a level that mixed martial arts fans have never seen before.

McGregor himself has promised yet another first round finish of Poirier, but actions speak louder than words.

In the time since McGregor and Poirier first met, McGregor rose to a level of stardom that is rarely seen in MMA.  The former two-division champion has defeated the likes of Jose Aldo, Nate Diaz, and Eddie Alvarez.  He even went on a worldwide tour to promote his iconic boxing match against undefeated Floyd Mayweather Jr., bringing a whole new set of eyes to the sport.

Poirier on the other hand has only tasted defeat twice since their first meeting, a first round loss to Ultimate Fighter winner Michael Johnson in 2016, and then a submission loss to current champ, Nurmagomedov.  Poirier has developed into a complete mixed martial artist, defeating the likes of Hooker, former featherweight champion Max Holloway, Justin Gaethje, and former champions Alvarez and Anthony Pettis.

What we are about to experience next weekend at UFC 257 could be an epic clash that is talked about for years to come.