Featherweight prospect Daniel Pineda just returned to the UFC in a big way with his win over heavy favorite Herbert Burns this past weekend at UFC 252. Burns was 2-0 in the UFC with two beautiful first round finishes, a KO (knee) over Nate Landwehr, and a submission (rear naked choke) over Evan Dunham. 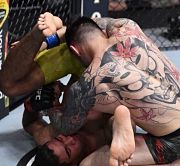 Landwehr may have been making his UFC debut, but he vacated his M-1 Challenge Featherweight Championship to join the UFC. Dunham may have been coming off an almost two-year retirement, but he’s a 1st-degree black belt in Brazilian Jiu-Jitsu under Robert Drysdale, he’s a savage on the mat, and Burns made it look easy.

Once the fight started, Pineda was looking great on the feet, until Burns took his back and got a trip immediately after. Pineda wasn’t in a bad spot for long though, as he reversed it and wound up on top for the remainder of the round landing vicious ground-and-pound. Some believed he deserved a 10-8 scorecard for that round.

Burns tried for a comeback at the start of round two, as he landed a beautiful outside trip double leg just 15 seconds into the round. Pineda remained on his back for about two-and-a-half minutes, and ended up getting mounted. Not where you want to be with a Brazilian National BJJ Champion. 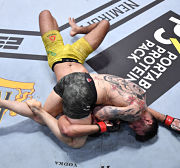 He ended up reversing the position however, as he got on top and started pounding away in the mounted crucifix position. It’s kind of crazy when a BJJ champion can’t get out of a position like that, but that just tells us how talented Pineda is, he does have a BJJ black belt of his own as well. Pineda ended up securing the TKO finish at 4:37 of round two.

Burns’ only two defeats came to an 11-0 opponent and a 7-1 opponent when he was 6-0 and 6-1, until Saturday. He hadn’t ever been finished either. Not many were picking Pineda to beat him, not many knew who he was.

However, if you’ve been watching the sport long enough, you know he’s an elite fighter, and perhaps you’d seen his UFC run that ended just over six years ago.

While he went 3-4 in his initial UFC tenure, he’s off to a great start in his return to the promotion. He also only lost twice since being cut, a split decision to Emmanuel Sanchez, who went on to fight for the Bellator Featherweight Championship, and a TKO (doctor stoppage) to former WSOF and TPF Featherweight Champion Georgi Karakhanyan. 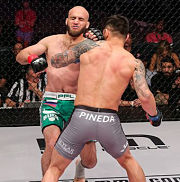 Pineda looked incredible in his two PFL fights, as he finished the 14-0-1 Movlid Khaybulaev via TKO (punches) just 29 seconds into round one. He came back out again later that night and defeated the 15-2 UFC veteran Jeremy Kennedy via submission (guillotine choke) at 4:00 of round one.

He did so well in that one-night tournament. He came into the tournament very late, in October to be exact. PFL runs tournaments all year long, which they call seasons. At the end of the season, the person that won the most fights and accumulated the most points in their weigh class throughout the year goes on to fight for the title on their New Years card.

Though he came into the season late, he vacated two titles to compete in it, and he had two first round finishes over very talented fighters. Khaybulaev was an undefeated assassin with a Knockout of the Year candidate in his fight prior, and Kennedy went 3-1 in the UFC, only losing to UFC Featherweight Champion Alexander Volkanovski. Pineda was about to fight Lance Palmer for the title and $1,000,000 prize, until he ran into the NSAC for a failed drug test.

Pineda had elevated testosterone-to-epitestosterone levels in his system, and considering both fights were in the same night, he failed the test for both fights, turning both victories into no contests. Pineda’s never had the prettiest record, but he’s fought great fighters everywhere he’s been. He came to the UFC with a record of 15-7 back in 2012, two months before Herbert Burns even made his professional debut, and he’s now 27-13 (2 NC). 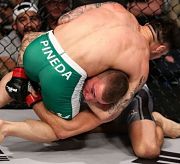 It’s unfortunate that his wins were taken away, he can’t really afford that. However, it’s really great that the UFC accepted him back. At 35-years-old, now’s the time for him to make his mark in the worlds leading mixed martial arts promotion. He’s also finished all 27 of his wins, all 29 if you count his no contests. 18 of his victories come via submission, with nine via knockout.

Pineda also has a very diverse submission attack, he’s submitted opponents with just about everything imaginable. From multiple heel hooks, armbars, kneebars, guillotine chokes, rear naked chokes, kimuras, triangle chokes, he can do it all. He had one stretch where three of his last four victories came via kimura, one of which was in the UFC and one over former WEC featherweight title challenger Leonard Garcia. 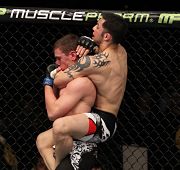 We’ve finally got one of the most well rounded fighters in the sport back, and it begs the question, what’s next for him?

Of course, he’s not ranked, yet at least. That leaves us with just about anyone outside the top 15, because Burns was knocking on the door to the top 15 featherweight rankings prior to losing to Pineda. The 12-1 Gavin Tucker would be a great fight to see him in. They’re both great strikers that throw all eight limbs, and they’re both BJJ black belts. 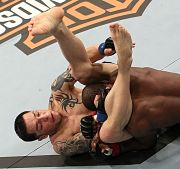 Jamall Emmers just improved his record to 18-5 on the first of this month, he’s a well rounded talent that’d make a good opponent. Or maybe Lerone Murphy, who’s 9-0-1 and is coming off a very impressive first round TKO over Ricardo Ramos.

The 13-0 former M-1 Challenge Bantamweight Champion Movsar Evloev or the 18-4-1 former Cage Warriors Lightweight Champion Chris Fishgold would also make great opponents for him. But, the one opponent that’d probably make the best fight, not many people know him, his name is Spike Carlyle.

Carlyle is 1-1 in the UFC, 9-2 overall as a professional, and he just fought Billy Quarantillo in May. Though he lost that fight via unanimous decision, many people believe he deserved the victory, and his only other loss is via split decision. The way Carlyle comes out in round one, the physicality of him and his brute strength and power, he’s a very exciting fight for anyone, especially someone as dangerous as Pineda.

By Cole Shelton 49 mins ago