Gavin Tucker just picked up his second straight victory at UFC Vegas 6, as he defeated Justin Jaynes via submission (rear naked choke) at 1:43 of round three. The odds were near even going into this fight, to our surprise, but that’s gotta have something to do with Jaynes’ promotional debut. Jaynes TKO’d Frank Camacho in just 41 seconds in his UFC debut just a month-and-a-half prior, a fight he was a sizable underdog in. 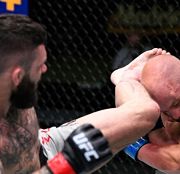 Jaynes was 16-4, had finished 14 of his wins, he hadn’t ever been finished, and he was on a five-fight win streak with all first round finishes. Tucker put a stop to that streak in a big way. He started picking Jaynes apart as soon as the fight started, but he got caught and hurt by an uppercut with about 90 seconds left in round one.

Tucker ended up getting the takedown to save himself from taking more damage, but was locked in a guillotine choke and got swept with it. He ended up getting out of the choke and reversed the position to end up on top, where he had an arm-triangle choke sunk in for the last 30 seconds of the round.

Round two showed Tucker picking Jaynes apart throughout it, wearing him out with the diversity of his attack. That’s the thing about Gavin Tucker, he doesn’t discriminate where he throws his shots, he throws everything at every target. He’s a beautiful Muay Thai striker to watch. 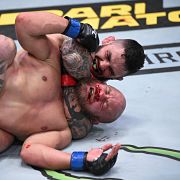 About 40 seconds into round three, Tucker caught Jaynes with a perfectly timed and placed knee, and this spelled the beginning of the end. Jaynes shot on a takedown, only to get stuffed and have his back taken. Tucker choked him out immediately afterward to mark his second third round rear naked choke victory in a row, and his fourth third round finish overall.

Tucker’s biggest problem however is staying active, he doesn’t fight often enough. This was just his fourth fight in the UFC, and he’s been here for three-and-a-half years. He fought twice in 2017, he didn’t fight at all in 2018, he fought once in 2019, and once so far in 2020. 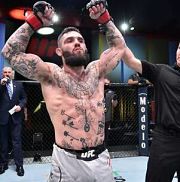 Now that Tucker’s on his first win streak of his UFC career, what’s next for him? Daniel Pineda just returned to the octagon in a big way after just over six years away with his second round TKO victory over Herbert Burns, that’d be a great fight, they’re both well rounded killers.

Charles Jourdain would also be a great fight, they’re both about as good as they come on the feet, and the way they fight is very similar. They’re both Canadian, but they’re not teammates, so it’s a possibility.

A fight with Makwan Amirkhani would also be great to see. Amirkhani has also had some problems staying active, but he’s changed that, recently at least, having had three fights in the last 14 months.

Amirkhani is an insanely talented grappler and has some very good hands as well, that’d be a great fight. Tucker boasts a black belt in Brazilian Jiu-Jitsu, but there aren’t many people in the world at 145 lbs that can stop the front chokes of Amirkhani.

Andre Fili would also be a great fight to see. Fili hasn’t been the most consistent with wins, but he has been consistent in having fights booked. Or even better, the UFC could give him a ranked opponent, like the No. 14 Shane Burgos, or maybe the No. 11 ranked Dan Ige.

The UFC most likely won’t give him a ranked opponent until he beats someone just outside the top 15, but he’s certainly capable of being a top 15 talent. That’s where he belongs as long as he can fight at least twice a year

What’s next for Gavin Tucker?

Why Derrick Lewis vs. Alistair Overeem Matchmaking Can Make Sense

By Donal Long 6 days ago

Thought Experiment: What happens if the UFC closed it’s doors?