Antonina and Valentina Shevchenko made history this past weekend at UFC 255, as they were the first sister duo to share a UFC card with one another. To make things better, they both won their respective bouts, and they both looked great doing so. 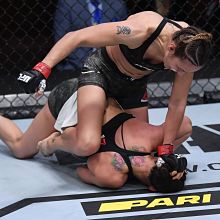 Antonina fought fellow kickboxing champion Ariane Lipski, and dominated the fight throughout, en route to a TKO victory at 4:33 of round two. What was really impressive about this is how good she looked on the ground, as well as becoming the first woman to finish Lipski.

She lost her last fight to Katlyn Chookagian back in May, a fight she was out-wrestled in throughout. She didn’t let that happen again, and Lipski was as willing as ever to initiate the grappling exchanges.

Antonina dominated the grappling exchanges this time around, and having just turned 36-years-old, now’s a better time than ever for her to make a run.

Valentina’s fight surprised some, but only because she didn’t dominate every single second of it. She ended up losing round two by being out-worked by Maia, she was able to take Valentina down and keep her down. However, Valentina won the last three rounds quite handily, as well as round one.

Maia did continue trying for the takedown throughout the fight, but was ultimately unable to aside from her winning round, and was pieced up for the rest of the contest. 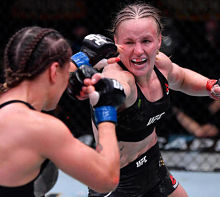 While the first half of that is true, the second half isn’t as much. Valentina has shown her grappling skills many times before. She submitted a high level grappler in Julianna Pena back in 2017, and she’s used her takedowns in many other fights.

She took Jessica Eye down, she took Joanna Jedrzekczyk down, Priscilla Cachoeira, Katlyn Chookagian, and all with the same takedown, the body lock trip. Valentina really does have the best body lock trip in the sport, she secures that takedown nearly every time she competes.

Valentina’s ground game has always been very sound, that’s the thing. She’s not just a kickboxer. Many of us were thinking her sister however was, until last night. Nonetheless, Valentina is one of the most well rounded talents in the entire sport, has been for a some time, and she’s easily a top ten pound-for-pound fighter in the world today. 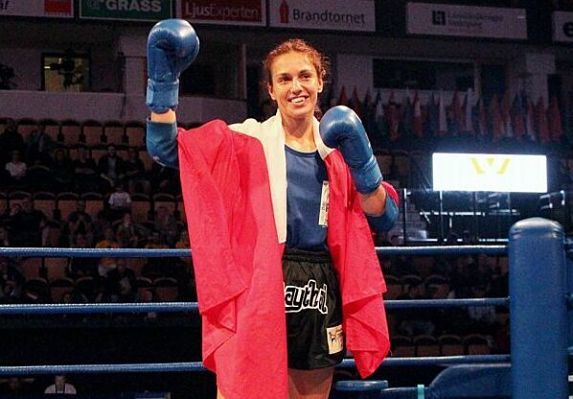 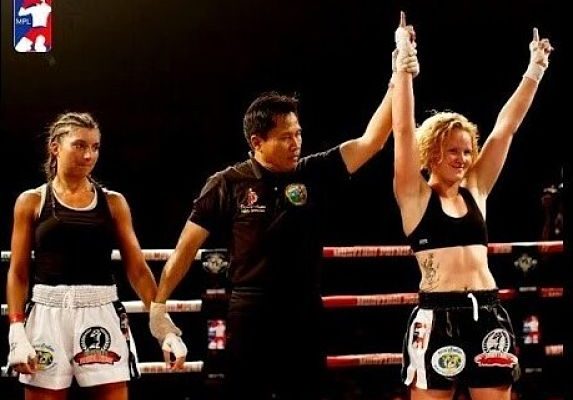 It’s safe to say these are two badass chicks! It definitely makes you wonder, what could be next for them?

They’re both flyweights, but Valentina said she sees them both as champions in the near future. Antonina, like Valentina, has fought at 135 lbs before, that could be an option for either woman. But in the immediate future, Antonina has a couple fights before she’d be deserving of a title shot. That buys them some time. 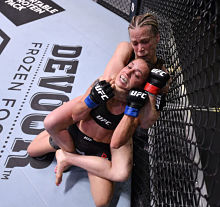 Coming into her fight, Antonina was ranked at No. 15, and Lipski wasn’t a ranked opponent. She definitely deserves a ranked opponent next though, she proved that on Saturday. The problem is, there aren’t many female flyweights in the lower part of the top 15 that aren’t coming off defeats, or multiple defeats.

The No. 14 ranked Montana De La Rosa may be our best bet. Viviane Araujo (No. 9) defeated her in her last fight, but De La Rosa’s 4-2 in the UFC with three submission victories, and both women are looking for that coming out party type of victory. This could be it.

For Valentina, it’d be awesome to see her against the No. 1 ranked Jessica Andrade, who’s finished opponents and had immense amounts of success at 135 lbs and 115 lbs, but has only fought a single time at 125 lbs. She did however finish the No. 2 contender Katlyn Chookagian via KO (body shot) in the first round of that lone flyweight bout. 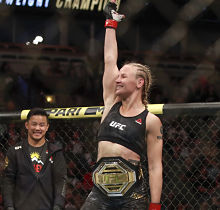 Valentina wanted to see Andrade and the No. 5 ranked Lauren Murphy fight for a No. 1 contender spot, which would be favorable honestly.

Murphy has won her last four-straight, and it would also be nice to see Andrade compete once more before fighting for the belt against the best in the sport, especially considering she was coming off back-to-back defeats coming into her Chookagian fight.

The champion did however say that if it’d take too long to match those two up, she’d take the Andrade fight. She doesn’t want another long layoff. She competed in February this year, so she hadn’t really been out too long.

She wants to rack up the title defenses while she’s young. At 32-years-old, she’ll be able to do that for at least a few years to come. It’s always an honor watching someone so knowledgeable in the fighting arts, we can’t wait for the next one!

What’s next for the Shevchenko sisters?