33-year-old Brazilian prospect Raoni Barcelos has looked absolutely incredible ever since making his UFC debut back in July of 2018, and he kept that momentum going this past Saturday at UFC Vegas 13. He did this by defeating 13-2 knockout artist Khalid Taha via unanimous decision. 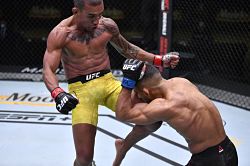 This was such a great fight that he was able to showcase all of his skills in, and he does have a lot of them, he’s a very well rounded talent. Firstly, he started training Brazilian Jiu-Jitsu at age five under his father, who’s a 7th-degree coral belt in the art.

Barcelos was awarded his black belt at age 20, meaning he’s been a black belt for 13 years. No wonder he’s about as solid as they come on the mat. He also competed for the Brazilian National Wrestling Team, the reason he’s so good at getting his fights down to the mat.

There is one other way he’s good at getting his fights to the mat, by dropping his opponents with his hands. Barcelos’ boxing is so technical, he has such a wide array of punches to go to, and he hits hard as hell.

He also has some pretty great kicks, from his leg kicks, the first of which he landed dropped Taha, and he has some great front kicks up the middle to the body and head. 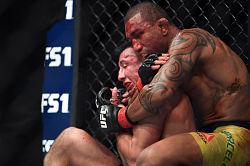 He’s about as solid as they come all around. At 33-years-old, he’s most likely right in the middle of his peak, which is somewhat unfortunate considering he isn’t even ranked. He should be, that’s the thing, he’ll continue proving it until he is.

Barcelos is also a multiple-time champion in Brazilian Jiu-Jitsu, claiming national and world championships at every belt color, but he hasn’t competed in a grappling tournament since 2010.

He won the RFA Featherweight Championship in his tenth professional fight before coming to the UFC, a title he defended twice, and only finished one of them. He’s gone the five-round distance twice in his career, winning the first 50-45, 50-45, 50-45, and the second 48-46, 48-46, 48-46, two of those title fights being against future UFC talents.

In his first four UFC appearances, he knocked out Kurt Holobaugh and Carlos Huachin, submitted (rear naked choke) Chris Gutiérrez, who’s gone 3-0-1 since, and he defeated Said Nurmagomedov via unanimous decision. Barcelos is now 5-0 in the UFC, and 16-1 as a professional following his victory on Saturday.

This begs the question, what’s next for Raoni Barcelos? He definitely needs a ranked opponent, he’s at that level, he’s running straight through everyone he’s been given. When you see someone like Marlon Vera is ranked at No. 15 and Sean O’Malley isn’t even ranked, it puts it into perspective how stacked the UFC’s 135 lb division is. 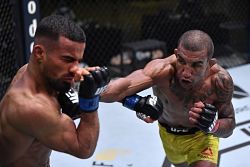 The No. 12 ranked Merab Dvalishvili is awaiting an opponent for December 5, that’d be a great fight. Dvalishvili is about as much of a machine of a fighter you could have, hence his nickname, and Barcelos would perhaps be the most well rounded opponent he’d fought.

The No. 6 ranked Pedro Munhoz would also be a pretty great fight. They’re very similar in styles, and though Munhoz is the sixth ranked bantamweight and Barcelos isn’t even ranked yet, Munhoz has lost his last two fights, and he really just needs a win. They’re both great boxers with good kicks, as well as both being elite BJJ black belts that can wrestle. 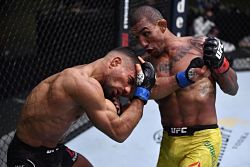 The No. 9 ranked Raphael Assuncao makes a good deal of sense too. Assuncao was for a good amount of time there the dark horse of the bantamweight division.

He’d gone 11-1 in the weight class with his only defeat coming to TJ Dillashaw, who he also had a victory over. He’s run into a bit of a road block however, as he’s lost to Marlon Moraes, Cory Sandhagen, and Cody Garbrandt in his last three fights.

He also had a victory over Moraes prior, Assuncao is a great fighter, and very well rounded. He too has a similar style to Barcelos. He has good hands, good kicks, and wicked BJJ. Barcelos needs that step up so he can really show us how good he is, because so far, he’s pretty great.