This Saturday at UFC 186, Michael “The Count” Bisping has the opportunity to become the highest paid UFC fighter in the history of the organization if he defeats C.B. Dolloway.

Even more surprising to the fact that ‘The Count’ could surpass Anderson Silva on monies earned, Bisping has never fought for a UFC title.  He is the winner of the Ultimate Fighter Season 3 and has been in the organization since 2006.

This will be his 23rd appearance inside the UFC octagon. 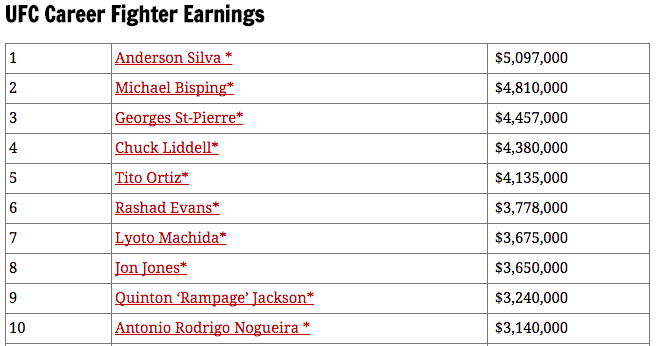 The numbers only reflect the payments made from UFC 46 until present day as athletic commissions did not start releasing fighter pay until 2004.

These are only the reported salaries plus Fight of the Night, Knockout of the Night and Submission of the Night bonuses that have been made public.  Many top performing fighters get additional bonuses paid out to them that aren’t reported, plus the top guys get a cut of the pay-per-view buys for events that they headline (not to mention every fighter makes sponsorship money).