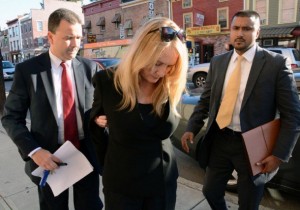 A former town official from suburban Albany has admitted improperly accepting money to lobby in her official capacity to legalize mixed martial arts in New York.

Melinda Wormuth has pleaded guilty to two felonies in federal court, admitting that as Halfmoon supervisor she accepted $5,500 in “consulting fees” for using her position with the town and the Saratoga County Board of Supervisors to lobby, sending letters in 2013 to state legislators.

Wormuth plead guilty to accepting bribes in 2013 regarding the legalization of the sport, and to make matters worse, the money came from an FBI agent claiming to be a backer of the bill that would legalize the sport. In exchange for the money, Wormuth wrote numerous pro-MMA letters, and attempted to construct a meeting in which the topic would be discussed.

She has also admitted lying to FBI agents, saying that she consulted a town justice for approval for what she did.

Federal prosecutors say she could face up to 12 months imprisonment.

Under the federal plea agreement, she’s expected to forfeit $5,500, pay a $7,500 fine and plead guilty to a state larceny charge.

Attorney Richard S. Hartunian spoke up on the topic, stating that Wormuth put her own interests ahead of the public’s which is simply unacceptable:

“This is yet another instance of an elected official who put her own interest ahead of the public’s. That is unacceptable at any level of government, whether in our state Capitol or in the counties and towns within the Northern District of New York.”