We have a very exciting heavyweight bout added to UFC Fight Night 207, going down June 4, 2022, at a to-be-determined venue. 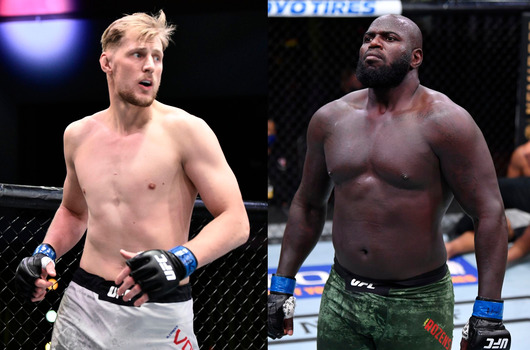 Rozenstruik was slated against Marcin Tybura earlier this year month at UFC 273, but Tybura was forced from the bout for undisclosed reasons and Rozenstruik was left without a dance partner.

However, he has a new opponent booked for later this spring opposing the last man to defeat Tybura in Alexander Volkov.

Though Volkov has had his ups and downs as of late, he’s still an elite talent capable of beating most heavyweights out there.

Following an initial 4-0 (two knockouts, two decisions) streak to start his UFC tenure, Volkov has since gone 4-4, most recently losing to Tom Aspinall, prior to defeating Tybura, who was on a five-fight win streak coming in.

He also boasts a knockout win over a kickboxing champion in Alistair Overeem, which he just did in February of last year, though Rozenstruik is a different test entirely.

Jairzinho Rozenstruik came to the UFC with a record of 6-0, and he too quickly went 4-0 (four knockouts) inside the octagon before losing for the first time. He ran into Francis Ngannou, now the heavyweight champion, who KO’d him in just 20 seconds.

A knockout win over former heavyweight champion Junior dos Santos would follow, before being outpointed by former interim champion Ciryl Gane. This was a disappointing performance, but Gane is also an elite striker, and he’s also a world champion in kickboxing.

Rozenstruik then knocked Augusto Sakai out, before losing his last contest to Curtis Blaydes.

One thing is for certain, though Volkov is an elite striker, Rozenstruik certainly poses more problems in the area, and it’s doubtful this fight hits the mat.

Rozenstruik went 76-8-1 as a kickboxer, winning 64 of those fights via knockout. He really is as devastating a striker as we could have in the heavyweight division. But, Volkov is a world champion in mixed martial arts, and though this will probably be a kickboxing contest with four ounce gloves, it’s not a certainty.

These two have a couple of common opponents, with both men having lost to Curtis Blaydes and Ciryl Gane.

Who do you see coming out the victor in this epic heavyweight contest?