Skip to content
The show must go on. Although the UFC Vegas 15 main event between heavyweights Curtis Blaydes and Derrick Lewis was scrapped due to a positive COVID-19 test from Blaydes, the 10-fight card pushes on. A light-heavyweight bout between former title challenger Anthony Smith and Devin Clark headlines the event inside the UFC Apex tonight, Saturday, Nov. 28. Welterweights Miguel Baeza and Takashi Sato will serve as the co-main event bout of the evening.
In a featured featherweight matchup, Spike “the Alpha Ginger” Carlyle (9-2) enters the octagon to face “Senor Perfecto” Bill Algeo (13-5).  Carlyle is coming off of a hell of a fight but a loss to Billy Quarantillo by decision.  Algeo took his first UFC fight on 6 days notice to meet Ricardo Lamas. Despite losing on the judges scorecards, Algeo did earn a performance of the night bonus for Fight of the Night and now seeks his first win in the UFC.
This is how MyMMANews saw the fight…
Round 1
Algeo looking very relaxed. Both guys still working on finding their range. Algeo scoring with some kicks. Both guys landing punches and Carlyle looks for the clinch and gets the takedown. Algeo back to his feet but Carlysle still wrapped around him. Algeo with a nice job of getting back to his feet but Carlisle looking for a choke and Algeo reverses and is now on top landing some hard lefts to the head. Very close round.
MyMMANews scores R1  10-9 Algeo
Round 2
Head kick from Algeo that Carlyle has to defend. Carlyle once again looks for the takedown but Algeo gets up immediately. Algeo seems to be winning most of the stand up and Carlisle is looking for the clench. Algeo reverses and takes Carlisle down and is immediately on his back with 3 minutes to work. Algeo has him flat and is working on an arm triangle. Dominating the position right now is Bill Algeo. Landing some ground-and-pound and briefly looks for the neck. With 30 seconds left in around Carlysle is able to reverse and get up top but Algeo landing some strong elbows from the bottom
MyMMANews scores R2  10-9 Algeo
Round 3
Algeo comes out very aggressive and is pushing the pace. You can see the confidence in Algeo’s boxing as he changes levels and scores. Nice sprawl from Algeo on a take down attempt. Heavy body kick landed from Algeo and Carlysle looks for the takedown and is able to score it. Algeo back-to-the to the feet once again and looking for separation. Another takedown attempt from Carlysle but he’s paying with body shots as Algeo is able to sprawl and continues to land. As they clench up against the cage, Algeo lands a beautiful knee to the body and is countering beautifully and landing some heavy left hands. 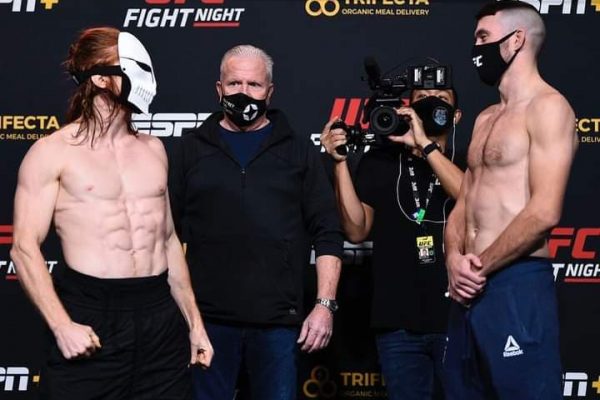