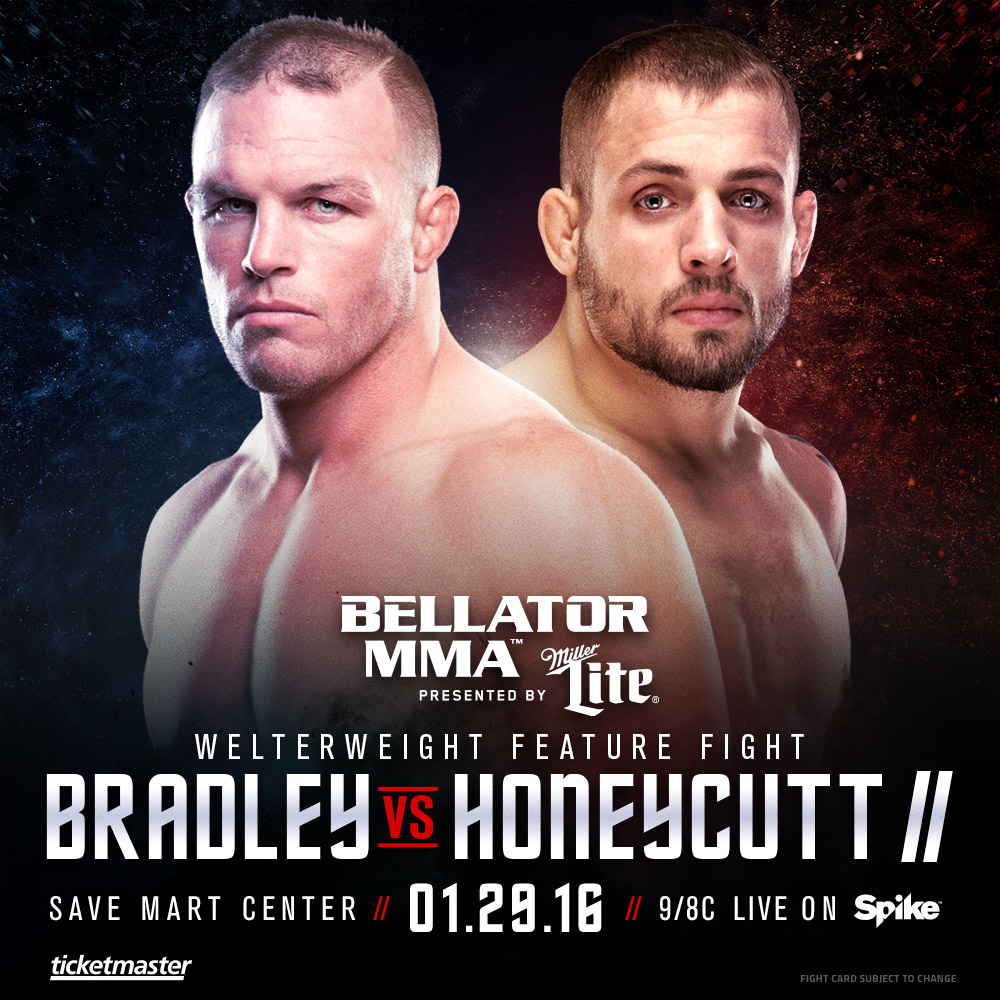 Now, the pair of welterweights will run it back during the main card of “Bellator 148: Koscheck vs. Secor” on January 29 at the Save Mart Center in Fresno, Calif.

Today, the preliminary portion of the card is filling up, with the news that Anthony Avila (12-4) will face John Reedy (11-6), Javy Ayala (8-4) battles Carl Seumanutafa (9-6) and Art Arcienega (14-5) versus Justin Smiley (9-7). Additional fights will be announced shortly.

“Bellator 148: Koscheck vs. Secor” airs live and free on Spike at 9 p.m. ET/8 p.m. CT, while preliminary bouts will stream live on Bellator.com and The Bellator Mobile App at 5 p.m. PT. Tickets for the event start at only $25 and are on sale at the Save Mart Center Box Office, as well as Ticketmaster.com and Bellator.com.

Aptly nicknamed “The Cutt,” the 27-year-old Honeycutt is a two-time NCAA Division I All-American wrestler out of Edinboro University. Following his collegiate wrestling career, which ended with a runner-up finish in the 2012 NCAA Division I Wrestling Championship, Honeycutt enlisted the help of fellow Edinboro wrestler Josh Koscheck, who he now trains with at the longtime MMA veteran’s Dethrone Base Camp in Fresno.

Honeycutt made his Bellator MMA debut in September 2014, scoring a TKO victory over Aaron Wilkinson. He picked up his second win for the promotion at “Bellator 133: Manhoef vs. Shlemenko,” scoring a TKO win over Clayton MacFarlane.

The 32-year-old Bradley is an Iowa native who also earned a pair of NCAA Division I All-American honors while competing at the famed University of Iowa. Bradley turned to mixed martial arts in 2006 and earned 11 consecutive victories to open his career, picking up the Ring of Combat middleweight title along the way.

Bradley made his way to the Bellator MMA cage in 2013, and in four appearances to date, has already picked up decision victories over Josh Neer and Karl Amoussou. While Bradley’s base is firmly in wrestling, he’s developed into a complete martial artist during his time in the sport and owns seven of his career wins by knockout with another seven coming by way of submission.