At around 19 years of age, Colin Wright was living in a two-bedroom apartment with 11 roommates. No one in that group made much money, none of the guys even had jobs. At the time, Wright had graduated from boarding school, not from one of the cushy ones, but as he describes it, one that troubled kids were forced to go to. He had no ambition and just wanted to party with his friends. One of those parties was a birthday party for one of Wright’s roommates, the roommate decided he wanted to celebrate by watching Ken Shamrock face Tito Ortiz. It was the first UFC event Wright watched and he was hooked. Two weeks later, he went to an MMA gym and the rest as they say, is history. 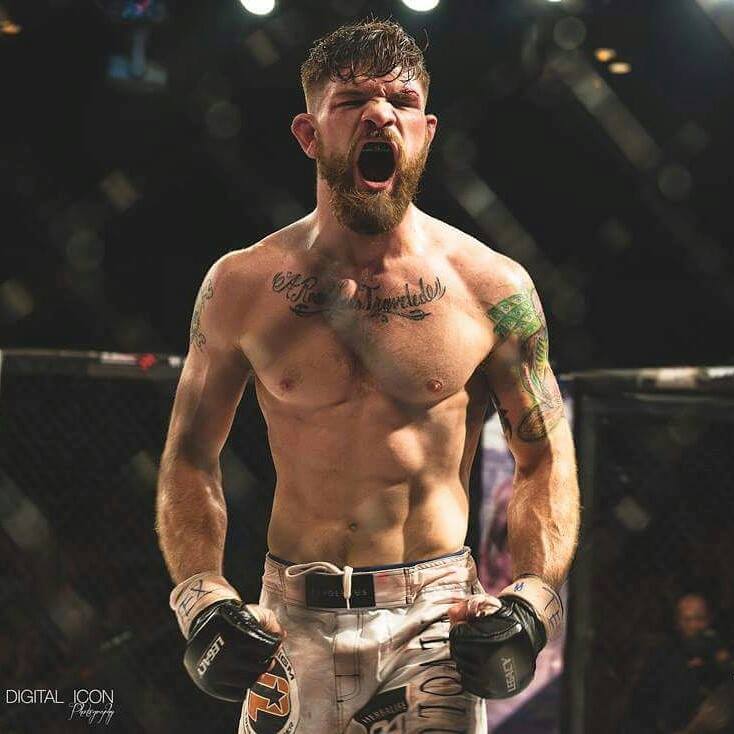 “Two weeks into training, I knew this is what I wanted to do for the rest of my life. I’ve been doing it ever since. It’s been about ten years, I’ve trained like a pro since I started.

But is was so close to ending up differently. When he went to the MMA gym for the first time, Wright was supposed to go to a military recruiter’s office sign a contract with the U.S. military. Instead, he went to the MMA gym and decided that was going to be his career. He never ended up going to the recruiter’s office, it’s a thought to this day of what his life would’ve been like if he had gone into the military.

“It’s one of those things I kinda go back and forth with I’m kinda like, part of me is like I wish I served my country and done that and kinda set myself up financially and educationally. Part of me is like you know, I don’t know if I would’ve stayed with MMA after that. It’s one of those decisions, I don’t think it was good or bad but I’m happy with where I’m at, I love fighting and I love where its taking me and what it’s done for me.”

At the time Wright was looking to start MMA, the hottest gym in the country was Miletich Fighting Systems. He said everyone was traveling to Iowa to train there. So when he found an affiliate around the corner from his house, it was a no brainer from him to go there. On top of that, when he walked into the gym, he was greeted by Sam Hoger, a cast member of season one of The Ultimate Fighter, which is what made Wright interested in the sport. Hoger was more of the face of the gym at that time but he encouraged Wright to try out for the gym’s MMA team.

Wright described his 19-year-old self as a “scrawny kid” and he was thrown in with the heavyweights. His tenacity and willingness to put himself out there earned him a spot on the team. He continued with the gym until it closed and then he joined Paradigm Training Center where he still trains today.

Since he decided not to start training, Wright treated MMA as his full-time job, which is why he believes he found success as an amateur.

“I’ve always treated fighting like it was my full-time job even when I was an amateur. So I won three amateur titles, I was undefeated, I never went to a decision.  A big reason for that was because I trained like a pro with high level pros right from the get go. I always treated this like a job. Like even jobs I would work, I would either quit them or I would do whatever I needed to do to work around my MMA schedule.”

“I still kinda do that now.”

Wright was considered a top prospect heading into his pro career but he quickly fell to 0-2 as a pro. He believes he was physically ready to be a professional but his lack of patience led to mental mistakes in the cage.

“I think at a certain point, I was just frustrated with not making any money, I was frustrated, my last amateur fight was cancelled at the last second. I just got offered a couple of short notice fights. I feel like I definitely rushed going pro.”

“I would’ve been ready for it if I took a full camp for my first fight. The guy I fought, he already had like seven pro fights. It was a good matchup for me, I mean I smashed him from start to finish, I just gave up a stupid armbar. It had more to do with the mental aspect.

Throughout his pro career, Wright has shown flashed of the dominance many expected out of him as an amateur and then he would slip. After losing his first two professional bouts, he went on a five-fight winning streak. After his win streak, he lost his next two fights. Currently, he is coming off of a win against Gerzan Chaw by a second-round finish. Wright believes that he has all the tools to compete with the best of the best, but he needs to keep his focus.

“That’s been the story of my pro career. I’m on par with every guy I fought. If you look at all those fights, it’s been split decisions, or very close fights or fights where there were definitely moments where I was running away from the fights. But due to lack of focus for one reason or another its cost me these bigger fights. It’s something that I think came down to confidence.”

His long-time mentor, Brian Melancon would tell him that there isn’t a difference between him and the UFC/Bellator fighters in terms of talent. Melancon told him the difference is that the UFC fighters have better conditioning and are always ready. Now he believes he has the confidence to fight at a high level consistently.

“I know I’m on par with these guys cause I train with them every day and I steal rounds from these guys, the UFC guys, the Bellator guys. I think early in my career I wasn’t super focused and I think now its starting to come full circle.”

In addition to working on his confidence, Wright has changed weight classes because of the maturation of his body. The scrawny kid has now become a man and the cut to 135 was no longer a healthy one. His last few bantamweight fights he walked around close to 170 pounds, now at featherweight, he feels like a new fighter.

Through it all, even though he wishes his losses happened when he was an amateur, he feels that they have been an important part of his career.

“These losses have been instrumental in going forward and being successful.”

Now, feeling confident and physically well, the Texas-based fighter is heading to Louisiana on July 27, where has several times, for his first chance at a professional title. He will face Kendrick Williams for the American Kombat Alliance featherweight title. The last time he fought for a title in Louisiana, Wright was victorious but he didn’t get a belt, this time he wants one.

“Last time, they kinda jipped me, I won the title and the promotor comes over and hands me this little cheap – he printed a piece of paper off his computer and put it in like a dollar picture frame. I was like “what is this.” They didn’t want to give me a belt, so I’m one belt short, so I’m going to go take this belt. I’m going to make sure it doesn’t leave my eye sight until I leave the state of Louisiana and bring it back to Houston.”

In order to do that, Wright will have to defeat Kendrick Williams. Williams is the hometown fighter, fighting out of Shrevport, Louisiana and he has a 4-2 record. He is coming off of two losses but his four wins have all come by KO/TKO in the first two rounds. However, that doesn’t bother Wright, who thinks Williams is tough, a good kickboxer and is explosive, but says that won’t matter in the fight.

“I think I’m an overall better mixed martial artist. This isn’t a kickboxing match you know what I mean, it’s an MMA fight and I think that’s where I have the real big advantage.”

As far as how it ends, Wright says that’s up to Williams.

101 Likes, 6 Comments – Colin (@colinwrightmma) on Instagram: “super dope highlight video my buddy @benwshepardfilms made for my upcoming title fight for…”

Wright is training with high level fighters such as UFC fighter Matt Schnell, TUF 27 competitor Dulani Perry and many other tough training partners out of Paradigm Training Center.

Outside of preparing himself for fights, Wright helps teach martial arts such as kickboxing. He is also looking to give back and use martial arts to help people with Parkinson’s disease and those who are coming back from serving our country overseas. Wright saw a video recently that showed boxing helping people with Parkinson’s disease recover. He also found out that martial arts have benefitted veterans greatly, Wright has family members who have served and went to military school himself as well as having almost joined the military. He says that will be happening soon.

It’s something I am definitely excited about getting into.”

“It’s right up my alley, obviously it’s a skillset that I already have, that I can utilize to help other people and I think that’s really important.”

As Wright looks to give back, he also looks to accomplish his own goals. With a win against Williams, that will put him at 7-4 and a few wins away from a possible opportunity at a major promotion. An opportunity he had trouble putting words together to say what it would mean to him.

“I don’t even know how to put it into words.”

“It would just mean the world to me.”

By Cole Shelton 13 mins ago

By Mike Pendleton 54 mins ago