In a typical Filipino household, parents encourage their children to exert effort in their studies to have good grades on their report cards in order to eventually have a bright future.

When parents talk of a “bright future,” they refer to white-collared professions like donning a white medical gown with a stethoscope in hand, wearing a business suit in a corporate setting, or holding a blueprint on a high-rise site with a hard hat.

However, the story mood takes a dismally sharp turn when a child opts to instead wear four-ounce gloves to compete in three to five-round bouts for cold cash.

Prizefighting does not require an educational background, which is why most people connote a social stigma to it by assuming that all it takes is hard guts to endure the punishing blows inside a ring or cage.

On the contrary, homegrown Filipino talent Danny “The King” Kingad is bent on breaking the stereotype to prove that not all professional competitors fit into this erroneous category.

Team Lakay’s Kingad, who takes up a bachelor’s degree in education at the University of the Cordilleras, has pursued his dream to be a mixed martial arts athlete while diligently working on his homework to get a college diploma.

Similar to a comic-book superhero with two different lives, Kingad wears his school uniform in the morning with his books. Meanwhile, he puts on his training clothes to hit some punch mitts and kick pads in the afternoon. 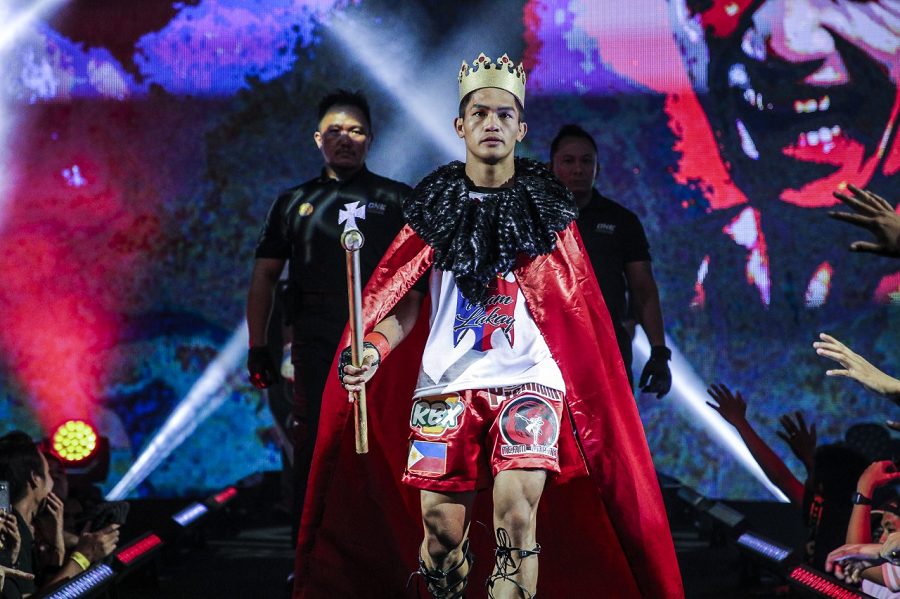 Kingad admitted that it is not easy balancing his time between mixed martial arts and his studies, but he is prepared to do what it takes for his passion.

“I am still studying, but I learned how to manage my time with the help of my coaches and senior teammates,” he stated. “I love this sport. I love to compete because this is my passion.”

Kingad is still a second-year Physical Education major as he had to minimize his units per semester to properly manage his professional career and his studies.

At the tender age of 22, Kingad has reaped dividends from his sacrifice as his name is starting to get recognized in the world of mixed martial arts.

A true warrior from the mountains of the Philippines and one of the top prospects to come out of Baguio City with an immaculate record of 5-0, Kingad is a tremendous striker who possesses well-rounded grappling skills.

Due to his outstanding run in local promotions, ONE Championship noticed Kingad and gave him a spot on the undercard of ONE: GLOBAL RIVALS in Manila in April 2016.

Kingad came out on top of his maiden ONE Championship assignment by scoring a first-round technical knockout of Malaysia’s Muhamad Haidar.

The young Baguio City native had an impressive follow-up to his ONE Championship debut by submitting compatriot Eugene Toquero with a first-round armbar in December 2016.

In his most recent trip to the ONE Championship cage, Kingad turned in a complete performance, putting his wide range of techniques on full display in a unanimous decision conquest of Malaysia’s Muhammad Aiman this past April.

With Kingad becoming a highly-touted standout in the Asian region due to his remarkable winning streak, Team Lakay head coach Mark Sangiao believes that he could be the next big thing in the sport, following the footsteps of his senior colleague Eduard Folayang, who is widely regarded as the face of the Philippine mixed martial arts scene and currently reigns as the ONE Lightweight World Champion.

“There’s no pressure on my part. To me, it’s a privilege to hear that from Coach Mark. I believe in what he said because I train with the best,” said Kingad as a response to Sangiao’s remark.

Although the sport offers fame and fortune, Kingad insisted that education remains as his foremost priority, knowing that he will need to engage in another source of income as being a professional athlete is not a lifetime livelihood.

“Education is very important because my career as a fighter will not last for a long time. By the time I reach 38 or 40 years old, I need to retire and have another day job to support my family,” he conveyed.

“Even though I love fighting, there will be a time in my life as a fighter that I will have to call it a day in competing. Meanwhile, education is something that I can use as I grow older,” Kingad added.

As Kingad continues to juggle his attention between schoolwork and mixed martial arts, he is in what is perhaps the biggest bout in his three-year prizefighting stint so far as the Team Lakay representative vies for the ONE Flyweight World Championship.

Kingad is set to challenge division kingpin Adriano “Mikinho” Moraes in the co-headliner of ONE: LEGENDS OF THE WORLD, which takes place at the 20,000-seater SM Mall of Asia Arena in Manila, Philippines on 10 November.

Much like a final examination before the end of every college semester, Kingad seeks to ace his tough test against Moraes, who is a more experienced cage competitor than him.

The 28-year-old Brazilian champion has a stellar win-loss standing of 16-2, owning eights triumphs by way of submission and three by knockout.

“Adriano Moraes is the biggest challenge in my young career. I know he is a tough and experienced fighter in the cage. But I believe in what I am capable of. I think I can compete with him on the ground and especially in striking,” Kingad said of his Brazilian foe.

Kingad shrugged off skeptics’ opinion that he is ill-equipped for a world title shot, citing that athletes like him go through rigorous preparations with the objective of having their hands raised at the end.

“There are many who keep on saying that it’s too early for me to have this championship opportunity. We are trained for this. All fighters dream to fight for the title. It might be a little bit early for me, but I consider it as a blessing,” he explained.

If he will walk out of the SM Mall of Asia Arena with the gold-plated strap around his waist, Kingad plans to use it as a platform to remove the derogatory labels attached to prizefighters in general.

“I am giving everything I have in training for this fight. Bringing home the belt will be a testament that pursuing your passion is not a hindrance in securing your future through education. It is also one way of breaking the stigma that fighters have in our society,” he stressed.

Mixed martial arts appears to be a sport for the barbaric and uncivilized, but essentially it is not as it is a competitive field that relies on both brain and brawn.

Kingad desires to see himself among the growing number of world-class athletes that became titleholders in mixed martial arts with college degrees, proving that the word “unintellectual” has no relevance to the sport.

But for now, Kingad will sit on his armchair listening to his professor while waiting for the school bell to ring so he can trek to the gym and train.