Eryk Anders made a mistake at UFC Fight Night 187 on Saturday, March 13.

Anders landed a knee tot he face of Darren Stewart, while the Brit was ruled as a grounded opponent. Referee Her Dean ruled the bout a no contest since the strike was deemed unintentional and because the fight was under two rounds.

He will headline the event against fellow welterweight Belal Muhammad inside the UFC Apex in Las Vegas, Nevada. A ranked light-heavyweight affair between No. 11 Misha Cirkunov and No. 13 Ryan Spann will serve as the co-main event.

Kicking off the main card is a middleweight matchup between Darren Stewart and Eryk Anders. Stewart last fought in September, dropping a split decision to Kevin Holland at UFC Fight Night 178 last September.

Stewart is 1-2 in his last three appearances, including a first-round submission win against Maki Pitolo at UFC Fight Night 174 last August.

Anders is also coming off a loss, suffering a unanimous decision defeat to Krzysztof Jotko at UFC on ESPN 8 back in May. He previously picked up two-straight wins over Gerald Meerschaert and Vinicius Moreira.

Here is how the middleweight bout between Darren Stewart and Eryk Anders went down at UFC Fight Night 187, including round-by-round scoring. For full event results, check them out right here. 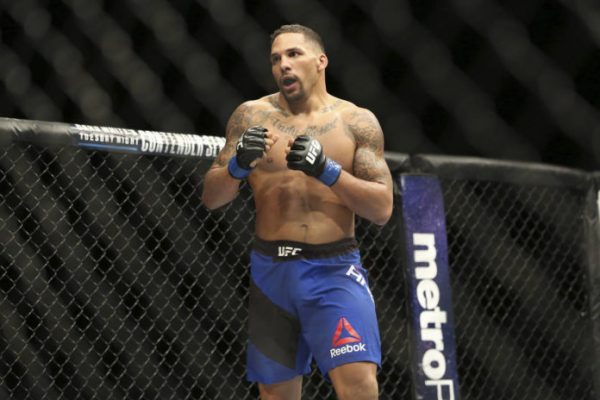 The two tap gloves. Anders counters a leg kick with a right jab. Anders lands a jab and Stewart come forward. Stewart lands and raises his hands. Anders looks to take down Stewart. Stewart defends in the clinch. Anders drops to a single leg takedown. Stewart wizards and defends. Anders lands a knee to the thigh. Anders is controlling Stewart and drops low for another takedown. Stewart continues to fend off the takedown attempts. Anders lets his hands go and tags Stewart. Anders drops down low and looks for a takedown. Anders is able to control Stewart from behind and finish the takdown. Stewart gets to his feet and they are swinging. The two are squaring off. Anders drops Stewart with a right. Anders is battering Stewart. Stewart is able to get tot his feet. Stewart is back down and Anders pours on the strike. Anders then lands a knee to the head of Stewart, who is a grounded opponent. Referee Herb Dean calls for a break. Stewart is on the ground and makes his way tot he feet. Stewart signals to the doctor and referee he is OK. The doctor is not convinced and tells Dean that Stewart is unfit to continue. Dean calls the fight.

Official result: Darren Stewart and Eryk Anders is ruled a no contest [Illegal strike to a grounded opponent]

A no decision is the ruling for our main card opener. #UFCVegas21 pic.twitter.com/LlgAg1mkb6