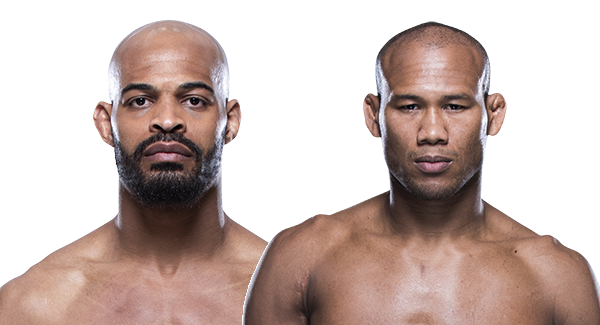 Since making the move from the World Series of Fighting to the UFC it is safe to say that David Branch has settled in nicely.

After a rough start in the early stages of his UFC tenure, he found his stride as of late in the organization.

Coming fresh off a first round knockout in his last fight against Thiago Santos at UFC Atlantic City, Branch now looks forward to a new challenge, and hopes that challenge comes in the form of current No.5 ranked UFC middleweight Ronaldo “Jacare” Souza.

Branch recently sat down with MMA Fighting and explained his desire to eventually get a fight the Brazilian submission master soon. He says he’d give anything to get the fight with “Jacare”, even if that requires him to come to Souza’s home country of Brazil where a September UFC card will take place.

“I’m willing to go anywhere,” Branch told MMA Fighting. “I’d go to the friggin’ moon if I had a passport and a freakin’ space shuttle. That’s what I gotta do, man. We have to do this. It must be done. We have to get this out the way so we don’t have to worry about this anymore.”

Branch sees a bout with “Jacare” to test his progression in the UFC, and to possibly slide into the top 5 in the middleweight rankings where the New Yorker currently sits at #7, in his mind, this all makes sense.

“I won my last one, he lost his last one,” Branch said. “It makes total sense. I’m not trying to play matchmaker — that’s not my job. But as a fighter, that’s the fight that I want. If you ask me who I’d like to call out, that’s the guy I’d like to do it with. He’s a warrior. He’s a fighter, he’s been fighting for a long time.”

Though Branch is extremely adamant about getting this fight with Souza, apparently the feeling isn’t mutal with Souza himself nor his management as it was revealed that the he has of no interest in facing the former WSOF Middleweight Champion but instead wants a higher ranked opponent.

“It doesn’t make sense to fight Dave Branch now,” Faria said. “‘Jacare’ is not in a hurry, he will sit down like everyone else does and wait for a bigger fight. ‘Jacare’ has always fought opponents ranked lower than him, and it’s time to face someone ahead of him.”

Suspicious by the stance from Souza, Branch believes he is holding on to his spot at the top of the rankings unfairly.

“You can’t sit in a position like that and babysit,” Branch said. “There’s no babysitting.”

When asked whether the fight will happen or not, Branch said he’s unsure but is indeed willing to do it at UFC Sao Paulo in September regardless.

“I think that we’re putting a lot of pressure on him,” Branch said. “He’s got the full-court press right now. Look, this is what it is. We’re real fighters. At the end of the day, that’s the fight that I’d like to fight. I think it’d be a great fight. I think it’s a fight that people would be interested in watching and I’m gonna g out there and I’m gonna fight hard as fck. I’m coming. I think that I’ve proved that already in the UFC. When they lock that cage, I’m fcking coming after your ass.”

Branch also stated that he believes the top ranked UFC middleweights are holding their spots too long and only fighting each other, he claims it’s time to add some new names into the fold.

“I don’t think he’s afraid,” Branch said. “I just think it’s a thing where a lot of the top-five fighters have been up there for a while. They’re all circumventing each other. They fight each other, they lose and they still stay in the top five. I want to be one of those fighters that bust in there and start bringing in new blood.”

Do you think David Branch will get his fight with Jacare?