“We’re thrilled to present Jim Miller vs Diego Sanchez as our Featured Bout on the UFC FIGHT PASS early Prelims,” UFC Senior Vice President and FIGHT PASS General Manager Eric Winter said. “FIGHT PASS has made a commitment to its customers to deliver strong featured Prelim fights throughout 2016 and beyond – and a matchup between these two world-class veterans is certainly a great FIGHT PASS exclusive for our customers around the world.” 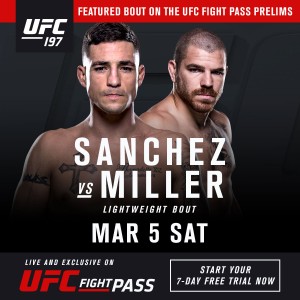 “These guys have 11 Fights of the Night between them,” Winter added. “This should be a great fight.”

Tickets for UFC 197, which is headlined by the lightweight title fight between Rafael dos Anjos and Conor McGregor and the women’s bantamweight title bout between Holly Holm and Miesha Tate, go on sale on Jan. 22.

Sanchez, the winner of the original Ultimate Fighter series has fought in the UFC’s welterweight, lightweight, and most recently featherweight divisions.  After falling short to Ricardo Lamas in the 145-pound division, Sanchez will return to lightweight to fight Miller.

Miller has been a consistent contender in the 155-pound division, but his most recent fight saw a submission loss to Ultimate Fighter winner, Michael Chiesa.

Both fighters need a win and as Winter said, with the two of them having the fight history that they do this one is sure to be fireworks inside the octagon.

By John Eric Poli 26 mins ago

By Michael Henken 30 mins ago

By Connor Northrup 44 mins ago