Doug Addison has been in the Stellar Fights family, taking on anyone they put in front of him for quite some time. He’s gotten in the ring or cage and faced some of the top tier strikers from around the region in a multitude of weight classes, proving his toughness, fearlessness, and tenacity. An attribute he doesn’t plan to change within his game plan anytime soon. “I’ll fight anybody!” Addison says. Continuing with, “I’ve beat people from 170, all the way down to 155”. he continues with. Addison is truly an athlete that encompasses the “anyone, anyplace, anytime” mentality. After all, fighters fight!

This Saturday, November 23rd, Addison gets a chance at redemption as he vies once more for the Stellar Fights 155lb Glory title…This time, facing the fiercely accurate SBY MMA standout, Taylor “Pretty Boy” McMahan. Falling short of his original title shot at the Stellar Fights gold strap, Addison refuses to let this opportunity slip through his fingers this time around. Riding high with momentum, Addison believes he’s on another level than most strikers on the Stellar Fights roster of fighters. “When it comes to throwing these hands in Stellar…I’m the best. At throwing hands..I have not seen anything in Stellar that I can’t beat.“ Addison exclaims. And addressing his bout with McMahan, Addison adds he’ll be “Making sure we’re taking advantage of every opportunity that he’s giving us to capitalize. “

Tune in for this exclusive one-on-one interview as Doug “The Bearded Warrior” Addison joins me via skype to discuss his main event championship bout at Stellar Fights 44.

For tickets and info for Stellar Fights 44, please visit the link.
https://stellarfightsmma.com. 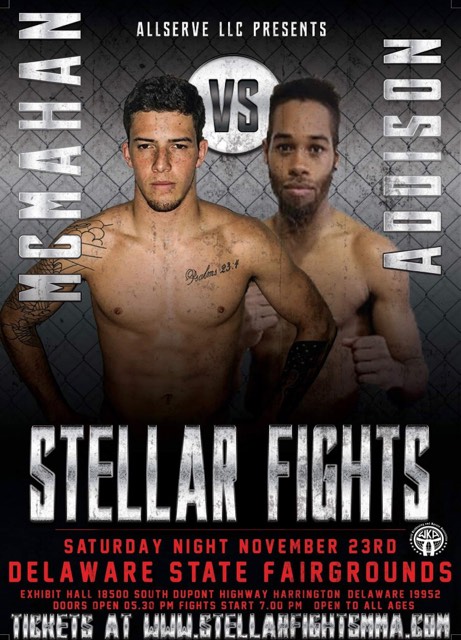