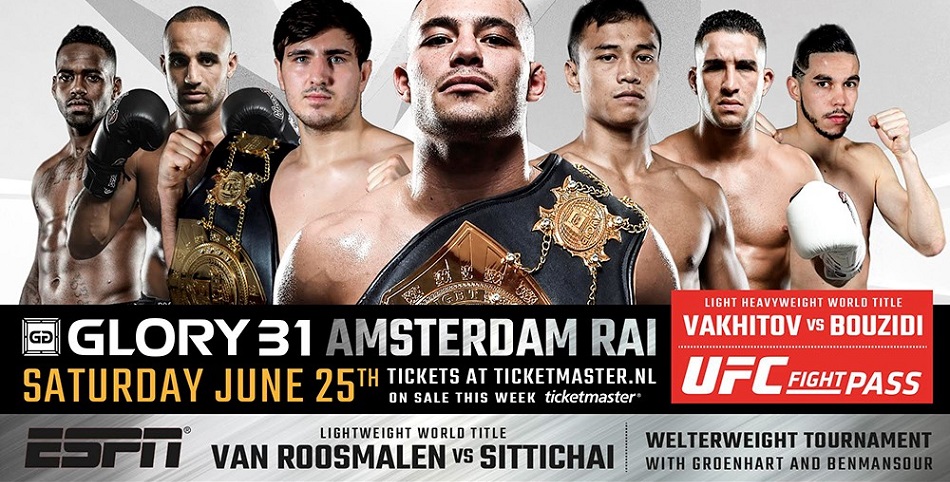 Both titles fights were announced previously during the GLORY 29 Copehagen and GLORY 29 SuperFight Series broadcasts on Saturday, April 16.

Joining the one-night, four-man Welterweight Contender Tournament at GLORY 31 Amsterdam are feared Dutch-Surinamese striker Murthel “The Predator” Groenhart (58-20-3, 33 KO), ranked No. 1 in the division, and GLORY newcomer Karim “The Felin” Benmansour of France. The final two tournament participants will be announced at a later date, with the overall winner earning the next shot at GLORY Welterweight World Champion Nieky “The Natural” Holzken.

Fast and furious featherweights have been added to GLORY 31 SuperFight Series, as recent title challenger and world No. 1 Mosab “The Jaguar” Amrani (51-11-4, 18 KO) meets 22-year-old rising French prospect Eddy Naït-Slimani (60-1, 17 KO), who impressed in his GLORY debut in March.

The cards for GLORY 31 Amsterdam and GLORY 31 SuperFight Series thus far can be found below:

Additional match-ups for GLORY 31 Amsterdam and GLORY 31 SuperFight Series will be announced soon.

Tickets for GLORY 31 Amsterdam and GLORY 31 SuperFight Series will be available for purchase this Friday, April 22 at ticketmaster.nl.

By Andrew Sumian 1 hour ago

By Kevin Wilson 3 hours ago