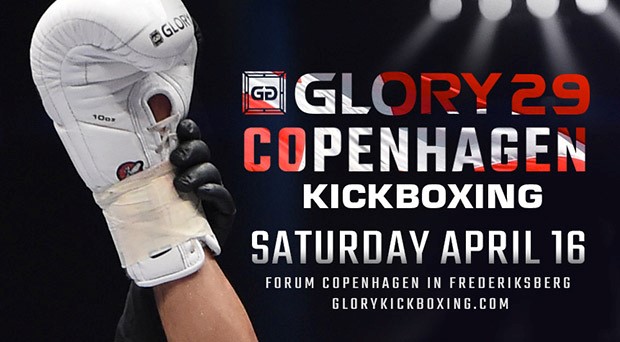 On Saturday, April 16, Forum Copenhagen in Denmark will host the most exciting strikers on the planet for GLORY 29 and GLORY SuperFight Series Copenhagen, marking a continued expansion into the European market.

“Our fanbase across Europe continues to grow and we’re always looking to break into new countries like we are with Denmark,” said GLORY Vice President of International Events Bertrand van der Ryd. “This will be our second event in Europe already in 2016 and we expect to maintain a strong presence both here and in North America to finish the year.”

GLORY 29 is headlined by GLORY Welterweight World Champion Nieky “The Natural” Holzken (88-11, 46 KO) defending his title for the second time, taking on Swiss striker Yoann Kongolo (61-6, 45 KO), currently ranked No. 4 in the world.

Additional match-ups for GLORY 29, including the participants in a one-night, four-man Heavyweight Contender Tournament to determine the next challenger for the GLORY Heavyweight World Title, will be announced soon.

GLORY CEO Jon J. Franklin added: “There’s nothing quite like a live GLORY show. Through our international broadcast partners, our global audience of over 200 countries is provided a window into an incredible striking event. For the fans in Copenhagen, it’s front and center for an amazing night of fights.”

Tickets for GLORY 29 and GLORY SuperFight Series Copenhagen go on sale Monday, Feb. 29. Tickets will be available for purchase via Billetlugen at billetlugen.dk.