Karat Combat is one of my favorite promotions in all of combat sports right now. The promotion is young and scrappy. It brings a different type of production value and takes karate to the mainstream audience. In their last event, Ross Levine captured the middleweight title, Rafael Aghayev showed that he is still that dude, and Gabriel Varga made his debut. On today’s Aftermath, we are going to look at a bit of that!

Rafael Aghayev is a karate legend, if you weren’t in the know. This fight was a “trilogy” with Davy Dona of which Aghayev technically won both. But one fifth was in sport karate and Dona knocked down Aghayev and was DQed for too heavy of a strike. In the fight, Aghayev showed, again, that he likes taking his opponents down and punching them viciously.

Aghayev would grab the leg and rain down punches on Dona. From the first point, any time Dona was taken down by Aghayev, he would hug him to stop the punches and it was quite effective. The fight ended up being Dona being out of his depth and Aghayev, who has fought twice in Karate Combat twice before, countering and keeping his hands higher.

Gabriel Varga brushing off the rust

My favorite story from the Karate Combat season finale was Gabriel Varga. His opponent was the massive Brazilian that is Bruno Assis. In his last fight, Assis put it on Vitalie Certain and worked the body well to wear his opponent down. But the kickboxing background was too much for Assis and Varga would ultimately get he win.

Varga hadn’t fought for two years and did look a bit rusty. His combos, as he said in his post fight interview, were a bit “sticky.” He struggled a bit to put them together smoothly. Where he did shine was his mechanics. Head movement, high guard and body work was a level above anything that Assis could have seen.

While this was a karate event, the most impressive moment in this event was a grappling exchange from Gabriel Varga after being thrown. Let’s refer to the diagram below and then break it down. 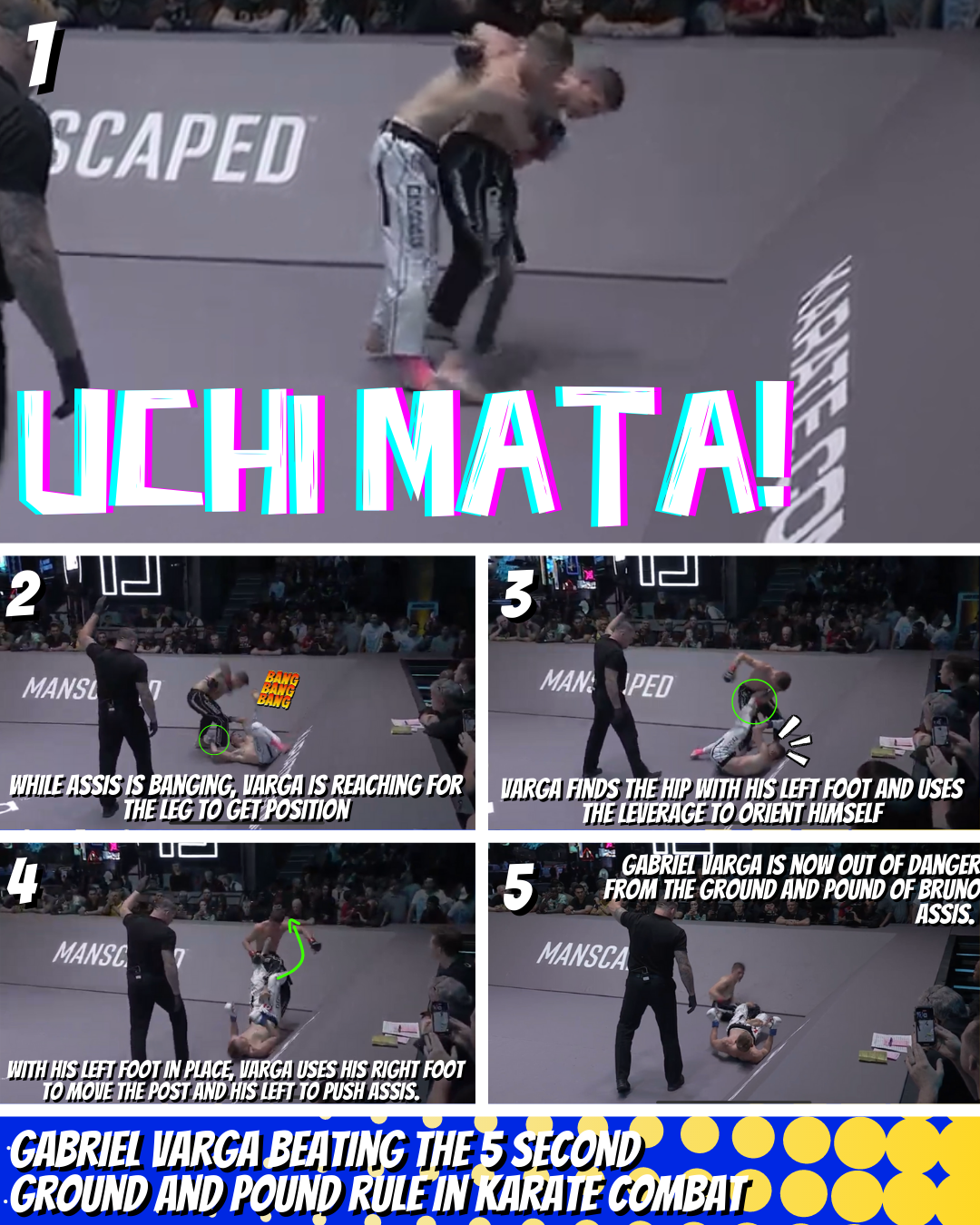 So we see Assis throw Gabriel Varga with an uchi mata (1), or a hip toss. It’s there that he can land some brutal ground and pound, which he does. But let’s take a bit closer of a look at Varga and what he does in this sequence.

Varga is 1-1 in mixed martial arts with Bellator. I believe this is where this sweep stems from. As he’s being pounded, (2) Varga is grabbing the left leg of Bruno Assis and looking to turn to safety. With his head between Assis’ legs, Varga is in prime position to get beat down. Turning away puts a little distance between his head and Assis’ punches. To do this, (3) he plants his left foot on the hip of Assis to turn. As he turns, (4) Varga uses his right leg to lift up Assis’ left leg and push with his left that’s on the hip. (5) Now that Assis is on the ground, Varga can get up.

While Gabriel Varga did this a little late and was hit pretty heavily, almost making the sweep pointless, it did change how I look at the ground and pound in Karate Combat. As with Aghayev above and many of the karateka before this card in Karate Combat, most fighters cover up and wait out the five seconds. But why do that and get punched four or five times when you can sweep the fighter similar to this and avoid the punches all together?

If fighters pay attention to this, it can bring a new level of ground defense to Karate Combat. With how the rules are set up, there’s no “full mount.” A fighter has to have one knee up all the time which makes them vulnerable to sweeps if you know what you’re doing. It might be something future fighters want to drill in the future.

Ross Levine is a giant

In the main event, Ross Levine captured the Karate Combat Middleweight title from Shahin Atamov. The fight was a prime example of why there’s weight classes and how much size truly does matter. Atamov is a great karateka. But at only 5’6″ and a 34″ arm reach, he is dwarfed by Levine. That’s odd in itself because Levine is only 5’9″ and a 36″ arm reach. The difference was in the legs. Levine had a 43″ leg reach with Atamov at only 35″. It made Levine seem to tower over Atamov.

The fight was Levine pushing Atamov to each corner and feinting looking to draw a strike out of Atamov so he could counter, and he did that the entire night. It was exhausting for Atamov who struggled to get inside and get much of anything going all night.

At one moment in the fight, Atamov was inside the pocket with Levine and to keep him from backing up, Atamov grabbed and pulled on the belt to keep Levine close so he can get something going. As the old saying goes, “If you ain’t cheating, you ain’t trying.” Atamov needed something to go his way desperately and this moment in round three, only round three, showed how desperate he was early on.

The fight was a great showing for Ross Levine who took the belt home with him on the night. Now, Levine looks to show that it wasn’t a fluke, which nobody would think it is based on that performance. But a title defense is absolutely in his future. I’d like to see Atamov move down in weight. Levine was too big of a man for him to get in on and Atamov could do good cutting some weight.

Regardless, Levine looked good and it showed in his karate. Levine really understands the pit and it’s mechanics which is similar to an MMA cage in that there are solid barriers, but also similar to a boxing ring where the corners can trap an opponent and a fighter can force a mistake. That was the name of the game for Levine. He used his natural abilities and gifts to beat his opponent.

By Blaine Henry 4 weeks ago

By Dylan Bowker 1 month ago

Bas Rutten: “Imagine what Raymond Daniels is going to come up with [in the Karate Combat pit]

By Blaine Henry 1 month ago

By Blaine Henry 2 months ago

Gabriel Varga on Karate Combat debut and Pursuit of Gold

By Dylan Bowker 2 months ago