It appears as if former welterweight title challenger Darren Till is finally nearing a return and will have his first fight in 2022 by the end of the year. As first reported by Brett Okamoto of ESPN, the UFC is working on finalizing a fight between Till and rising middleweight contender Dricus Du Plessis on the UFC 282 card in December.

There is no official announcement for the fight as of now, but according to the report, both Darren Till and Du Plessis have verbally agreed to the fight. The last time Till competed in the Octagon was back in September of 2021, when he suffered a third-round submission loss to Derek Brunson. Since then, injuries have kept him out of action and most recently, forced him to withdraw from his scheduled fight against Jack Hermansson. 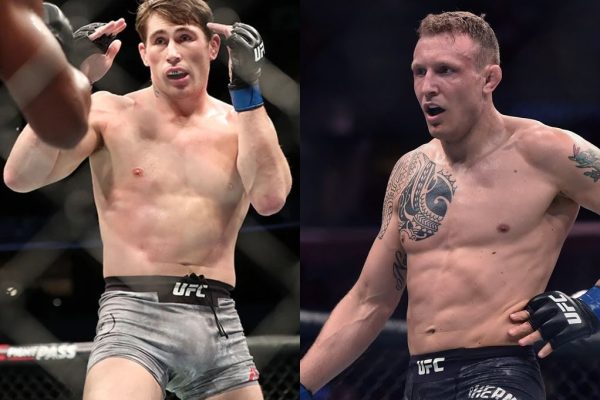 Since July of 2020, Darren Till has only competed twice inside the Octagon, with the most recent loss to Brunson, and before that he dropped an unanimous decision to former middleweight champion, Robert Whittaker.

The return for Till will not be an easy one as he steps back into competition against a rising prospect in Dricus Du Plessis. The 17-2 professional out of South Africa has exploded onto the scene since joining the UFC, going 3-0 with the promotion, picking up wins over the likes of Markus Perez, Trevin Giles, and Brad Tavares earlier this summer.

Picking up two finishes in his first three fights in the UFC, Dricus Du Plessis has not only started off his UFC tenure undefeated, but he’s also worked his way into the Top-15 rankings, where he currently sits at the 13th-ranked UFC middleweight. By no stretch is the fight between Till and Du Plessis going to have title implications, but with an impressive victory, either fighter could not only find themselves nearing a Top-5 ranking, but also a big marquee fight to follow.

Here is the UFC 282 lineup as currently scheduled: